With air travel in Europe at a standstill, questions for the pilot: Why not overfly the cloud, or fly under it? 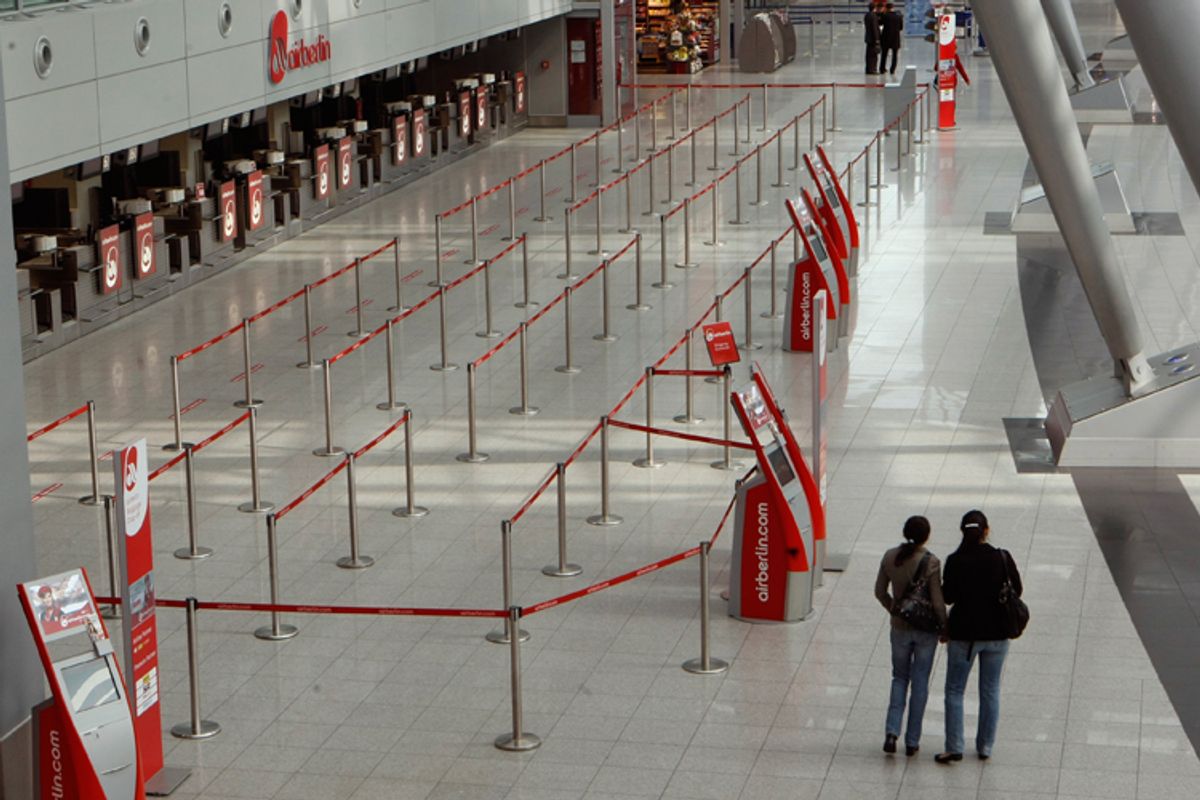 Two women look at the arrival hall of Duesseldorf's airport on Monday.
--

The situation in Europe has gotten worse, not better. Carried by upper-level winds, the Krakatoa-esque ash cloud from Iceland's Eyjafjallajokull volcano has curtained several more countries in a caustic no-fly zone.

This weekend, several European airlines, including KLM and Lufthansa, deployed aircraft on test flights with no ill effects, prompting some to call for the restrictions to be eased, but for now up to about 80 percent of European airspace remains shuttered. Airlines have canceled thousands of flights, stranding tens of thousands of fliers, and the prognosis is for continued chaos over at least the next few days.

This has been an unprecedented event.  Natural disasters rarely impact air travel for such lengths of time or over such widespread areas. Hurricanes and typhoons, maybe, can slow things down for a couple of days, but we've never seen anything like this. It's going to be murderously expensive for the airlines -- industry losses are estimated at $200 million per day -- with logistical ripple-effects affecting millions of people on six continents.

Despite the weekend's cautious good news, those of you planning to fly anywhere in Europe should check with your airline.  And as I mentioned the other day, flights beyond Europe, to portions of Asia and the Middle East, could also be affected, as the airspace closures pose complications to long-haul flight planning. Having fewer alternate and diversionary airports available, for example, can mean circuitous routings and payload limitations.

I've been asked why flights headed beyond Europe simply cannot overfly the cloud, since it reportedly tops out at around 35,000 feet, well below the ceilings of most commercial planes. One problem here is that a flight always must be able to descend to 10,000 feet in the event of a pressurization failure. This is true even when flying over high mountains; there is always an escape route that will allow for descent in a relatively short amount of time.

Another question I'm getting is why, flying between the U.S. and Europe, planes cannot circumvent the cloud by taking a southerly track across the ocean? The problem with this is mostly one of fuel capacity. Such a routing would be a lot longer in terms of miles, meaning longer flight times and probable payload restrictions. The reason commercial planes trace a northerly route between the U.S. and Europe, passing along the Canadian Maritimes, Newfoundland, and the U.K., is because that's the shortest distance -- a so-called great circle route. Going straight across the ocean between, say, New York and Rome, is considerably longer.

Below the cloud? Again there are fuel issues. Plus, the exact location and density of the ash is variable.

Meanwhile, trying to find a lighter side of all of this, I was studying the name "Eyjafjallajokull," again -- a word that looks and sounds like the alphabet exploded. Is there an anagram in there? I'm beginning to understand why the Icelandic language never caught on.

I was in Iceland for a few days once, about 10 years ago. I remember eating a pizza in  Reykjavik. It cost $38. Those were Iceland's good old days, before its economy tanked and the country began, literally, going up in smoke.

The sidewalks in Reykjavik are geothermally heated to keep the snow off.

Icelandair is Iceland's national airline. The carrier has for decades been popular with budget fliers, and has carved a successful niche for itself carrying people not necessarily to Iceland, but through Iceland, on routes between Europe and North America. Passengers transit at Icelandair's hub at Keflavik, about 30 miles outside the capital.

Anyway, onward to a couple of related questions:

The other day you talked about a pair of 747s that lost all four engines after flying through volcanic ash over the Pacific several years ago. That got me thinking. If a 747 or other large plane is forced to glide, how far can it travel, and how much control would the pilots have?

Well, from 30,000 feet you could figure on a hundred miles' worth of glide, give or take. Failure of all engines is, to be clear, a full-blown emergency, yet there's no more a prospect of instant calamity than taking your foot off the accelerator when coasting downhill in a car. The car keeps going and a plane will too. In fact the power-off performance of a large jet is better than that of a light Piper or Cessna. It needs to glide at a considerably higher speed, but the ratio of distance covered to altitude lost -- close to a 20:1 ratio -- is almost double.

While it may surprise you, it's not the least bit uncommon for jets to descend at what a pilot would call idle thrust, i.e., with the engines run back to a zero-power condition. They're still operating, but providing very little push -- not a lot different from switching them off entirely. You've been gliding many times without knowing it.

As for control capability, that depends on the aircraft type. An airplane's internal systems are powered hydraulically, electrically or pneumatically, and/or sometimes with mechanical backups, and they react differently to power failures. Multiple engine loss (including that of the APU, a small jet engine that helps run different systems when the main engines aren't working), will render many components inoperative, but no aircraft will tumble from the sky. They all can glide. On some aircraft, multiple engine failure causes a small wind turbine to automatically deploy into the slipstream to help provide control authority.

Total engine loss is about as probable as a flight attendant volunteering to give you a shoeshine, though it has happened several times since the 1970s:

That might seem like a pretty long list, but in the grand scheme of things such events are exceptionally rare. And notice all those zeroes. (The Ethiopian Airlines incident in 1996 would have had a much better outcome had the hijackers not been wrestling for control at the time of impact.)

All commercial planes must be certified to fly with one of its engine having failed. And by "fly" I mean not just remain in the air with critical systems powered, but be able to climb away and avoid all obstructions even with a failure occurring on takeoff.

Nevertheless, even with the remaining engine(s) running smoothly, most airlines' policies call for crews to land as soon as is practical following a failure or shutdown. "Practical," though, is an important word, because the nearest airport may not be the most suitable. Factors to consider are weather conditions, runway length, maintenance capabilities and passenger handling facilities. The captain has the final say on where any flight will divert, but ordinarily, unless the situation is urgent, these decisions are a team effort. The crew will confer with its dispatchers, who legally share responsibility with the captain, before agreeing on a destination.

We are told that ash is highly abrasive and can cause cockpit windshields to become totally opaque. How would you land if your windshield was grayed out? I suppose you could smash out of the panes, but what then?

You probably couldn't smash out one of the panes, actually. Cockpit windshields are unbelievably strong.

In many cockpits the larger of the two side windows can be opened. When the cabin is pressurized the panes are impossible to budge (just as you can't open the door of a pressurized airplane either), but when depressurized they unlatch and slide rearward along tracks. You'll sometimes see these windows opened while a plane is sitting at the gate; I open them all the time during nice weather to let the breeze in. They're also useful in an emergency. A nearby compartment contains an escape rope, and more than once pilots have evacuated this way.

So, the idea would be first to establish yourself on a straight-in instrument approach toward the runway. Then, depressurize the cabin while slowing down as much as possible. Approach speeds are somewhere around 160 miles per hour, depending on aircraft type, weight and flap settings, but in an emergency you could probably finesse things and come in a little slower. It wouldn't be comfortable, but you could get yourself a view of the runway without having your head ripped off or your neck broken.

Landing would be relatively easy at on a runway equipped with an ILS approach -- the standard approach system that guides planes vertically and horizontally to the threshold -- especially if you could set up for an autoland, assuming your plane is equipped and all of your components were working. The plane will get itself onto the ground, more or less, and the only real catch would be keeping on the runway centerline while safely decelerating.

On those airplanes with cockpit windows that cannot be opened, however, or on a runway not equipped with an ILS and serviced only by a so-called non-precision approach, this maneuver would a lot trickier -- though still possible.

British Airways Flight 009 was one of those two aforementioned 747s to lose all four of its engines. It happened in 1982 after an encounter with an unforecast ash cloud from Indonesia's Mount Galunggung. The crew managed to restart three of the engines, then pulled off a nighttime, non-precision localizer approach into Jakarta even though visibility through the windscreen was almost nil.  The 747's cockpit windows do not open.  Capt. Eric Moody, in one of aviation's all-time greatest quotes, described the landing as, "a bit like negotiating one's way up a badger's arse."

Indeed his predicament was at least as bad as anything Capt. Sully faced that day over the Hudson.

The KLM 747 that had a similar encounter in 1989 (PH-BFC, the "City of Calgary") is still in service, by the way, despite having suffered $80 million worth of damage. Here's a picture of it.