First blood in banking reform goes ... to the GOP? 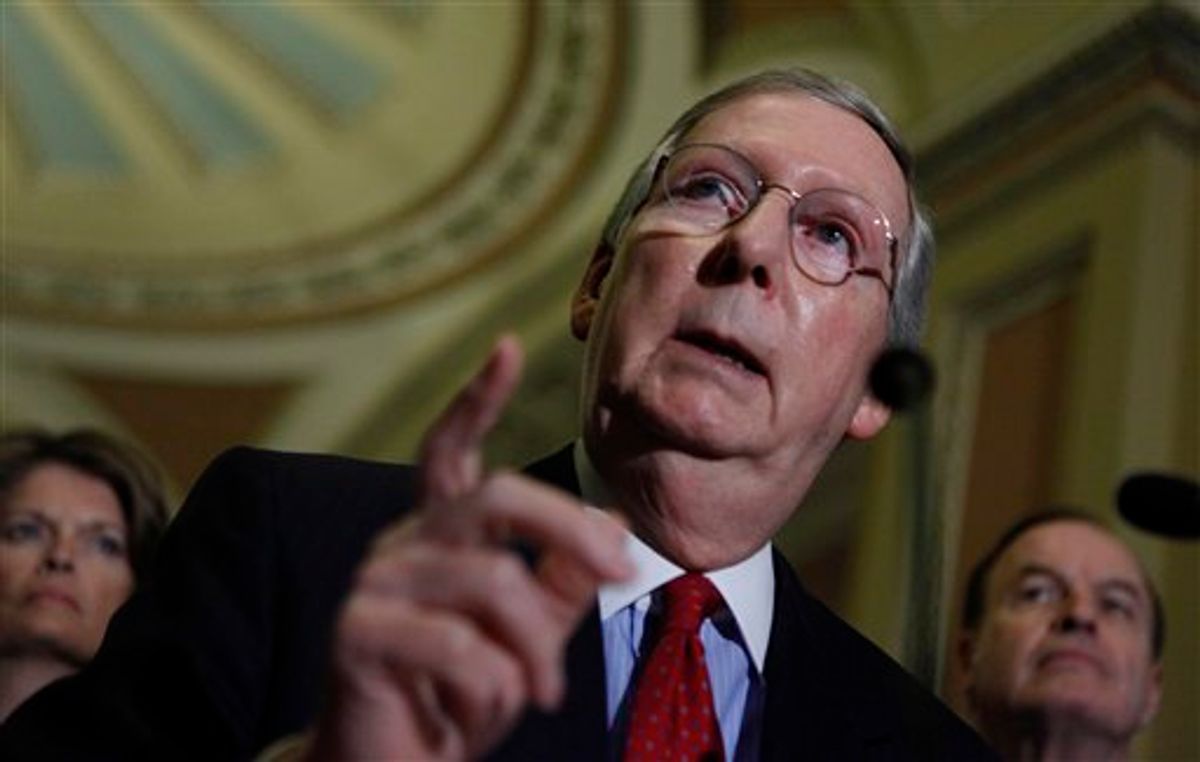 Noam Scheiber's latest "inside story" on the back-room maneuvering around economic policy in Washington, "Head Lock," claims that "Goldman and the banks are getting clobbered" by the Democrats on the topic of the day: banking reform.

I'd like to believe that, but it's a little hard to square with what appears to be the state-of-play in the first flash point of disagreement between Republicans and Democrats, the $50 billion  liquidation fund that Senate Minority Leader Mitch McConnell labeled a "bailout fund " last week.

Even for the modern GOP, McConnell's talking-point rhetoric on banking reform provides a recent high point for Orwellian misdirection. As currently designed, the liquidation fund is a pool of $50 billion generated by a direct tax on the big banks, and meant to be used to pay for the orderly shutting down of a failing bank. Ezra Klein has a nice summary:

Here's the chain of events: A bank is judged failing. The FDIC submits a plan for the bank's liquidation -- which includes firing management, wiping out shareholders, handing losses to creditors, and selling off the firm -- and gets it approved by the Treasury secretary. Then the FDIC takes over the banks. The $50 billion fund is used to keep the lights on while all this happens. It's there to prevent taxpayers from having to foot the bill for the chaos that will occur between when we recognize a bank is failing and when we shut it down.

Whatever you want to call this, it isn't a bailout. It's the death of the company.

As the Wall Street lawyer who writes the Economics of Contempt blog observes, the big banks hate the liquidation fund.

Killing a "pre-funded" resolution fund -- which would be used to help pay for resolutions under the new resolution authority -- is the Street's #1 issue in financial reform. That might seem a bit strange at first, until you realize that the majority of the $50 billion would come directly out of the major dealer banks' profits over the next few years...

There is little question that Mitch McConnell is directly doing Wall Street's bidding by demonizing the liquidation fund. But what's surprising -- and disturbing -- is how quickly the White House made it clear that it didn't consider the fund a priority. According to the moderate Maine Republican Sen. Susan Collins, Treasury Secretary Timothy Geithner told her on Monday that the fund was not an administration priority.

Geithner's promise, reports Politico, riled Senate Democrats, who are probably wondering why the White House is ready to make concessions so quickly, if it really does have the Republicans in a "head lock." Majority Leader Harry Reid is talking tough, but if the Democrats are looking to carve off a few Republican votes, avenue No. 1 -- killing the liquidation fund -- appears wide open.

Let's recap: As the first skirmish in the battle over banking reform finally unfolds, the Republicans launch an all-out attack on an aspect of the bill that Wall Street considers especially repugnant. And the White House folds, immediately. This does not augur well for the struggle over derivatives reform, due to take center stage on Wednesday.