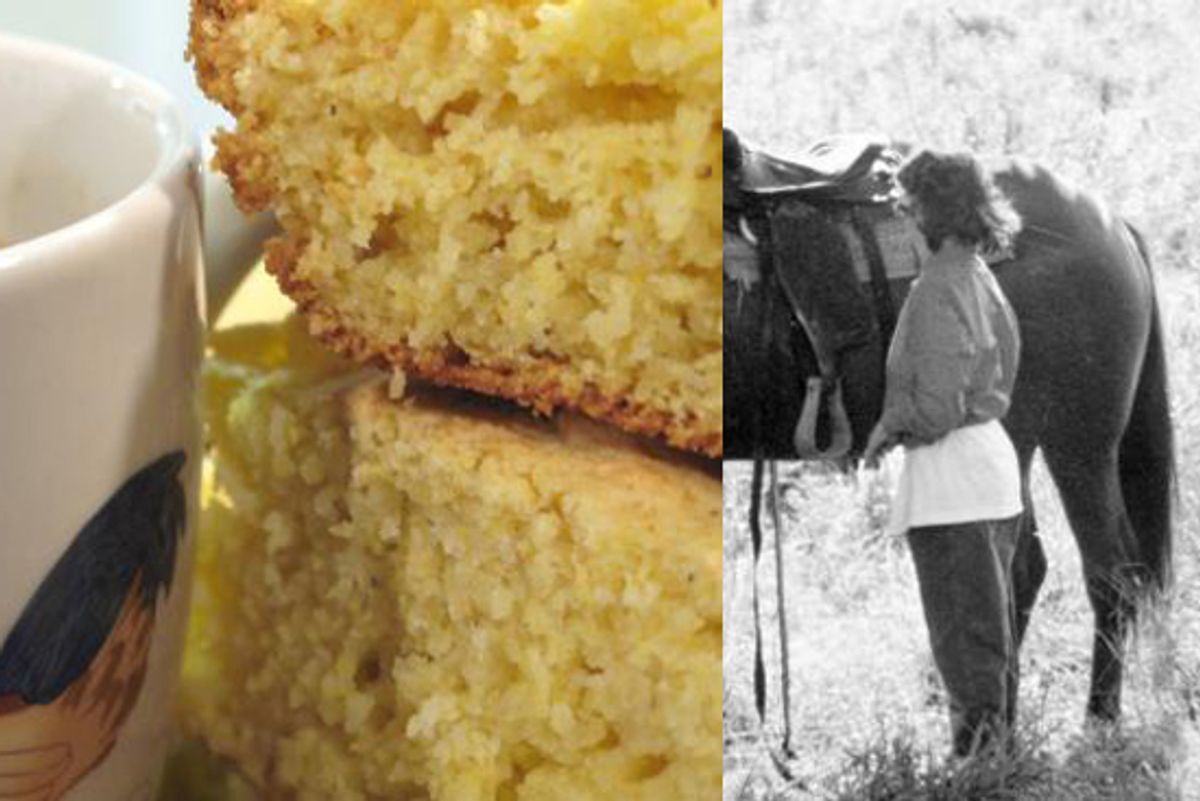 A version of this post appeared on Lulu and Phoebe's Open Salon blog.

It was a charming 1800s saltbox abandoned mid-renovation. Set on acres of field and woods, the house's real age could be carbon-dated by the number of field stones missing in the foundation. The glass-half-full realtor almost convinced us that missing stones meant natural fresh air for the cellar. We imagined picnics in fields of wildflowers, hikes through the woods and acres of gardens. So what if our water supply was some stream up in the wooded hillside? Unlike our old Victorian in the city, this was a country house with two (almost functional) bathrooms and we bought it.

We wore out two entire sets of friends finishing the renovations. Too bad not one of us realized that streams freeze in the winter and therefore so would our pipes. When the first thaw occurred we made improvements to the water supply and our thoughts turned to the acres of land.

The place screamed for barnyard animals. The homestead came with two barns, not quite finished falling down. We voted. No chickens because the oldest child was a newly minted vegetarian. Our rabbits kept dying from frightful night noises from the woods. Goats were mean. Sheep were hairy and smelled. We finally decided on a horse because it would not only look awfully Ralph Lauren but chestnut would accent the new color of the house. There are dumber reasons.

Learning quantum physics would have been simpler than taking on one quarter horse named Bones (as in "Star Trek" Doctor McCoy Bones). He ate a lot more than dogs and didn't come when called. Apparently some horses are quite clever at undoing gate latches even if the fences are electrified. And they eat flowers and vegetable gardens. The horse developed quite the attitude when he realized we were neophytes in all things equestrian and took full advantage of our stupidity. Once in a while one of us would look out a window only to see a big horse face staring back at us, lips on the glass. The escapee had no shame begging for treats.

One Vermont photo-perfect fall morning I was in the kitchen making corn bread, looking out the window marveling at my young daughter slow walking in the field on her horse. They ambled behind a bump in the terrain out of view. Suddenly, out whooshes a galloping Bones with … wait. No rider? Blink, blink. I see it. There are human feet and hands. The horse turns and I see the blur of child and saddle, perpendicular to where she should be riding and parallel to the ground. The horse is galloping and she is hanging on for dear life. I manage to throw myself out the door just in time to see her flying over the top of the horse into the tall grass.

My brain is not processing this as quickly as it should. I am sidetracked by Bones. I only see the front end of the horse and it looks like he is sitting in the grass like some 1,000-pound overgrown puppy. My brain, mesmerized by a sitting horse, almost misses my girl as she pops up with a bounce from the field and yells out in one breath, "MOMMM! BONES IS SITTING AND HE WON’T LISTEN TO ME! MOMMM!" Bones turns to me and winks before gracefully getting up and snorting at the child. Totally docile, he lets her walk him back to the paddock.

Bones escaped regularly. When he wasn’t at a window begging, he would be somewhere close by eating someone’s garden. We’d be outside roaming the dirt road calling out his name. Soon enough someone would reply loudly through the woods, which echoed better than any AT&T 3G service today.

We called it crystal-clear woods-wireless. However, the traditional Vermont-speak was a little harder to decipher.

Double-duty electrified, triple-duty latches were installed later that day. We found Bones the next morning, once again on the other side of the fence eating the last of our stumpy vegetable garden. The only thing still growing unharmed was zucchini, which even the horse wouldn’t eat.

Not long after, Bones went to a home far better suited to his needs. Happily, the child moved on from horses to kittens. Not only did felines eat less, they never had any interest in the flower or vegetable gardens. More my kind of barnyard critter.

Just for payback, every once in a while Farmer Roy let his cows wander into our field, right up to the back door. There is nothing quite like opening the door early in the morning only to be greeted by a herd of 1,200-pound cows chewing on the rose bushes.

Those woodsy hikes? Overrun with bramble and poison oak. Picnics in the fields? Lots of field mice and really, really big snakes.

On cold mornings we still make a batch of cornbread almost the same way we did back then, slathered with fresh butter and jam. The only thing missing is a horse named Bones staring in through the window, and a herd of Holsteins knocking at the back door.

The cornbread can be made gluten-free and is best served warm. Serve with softened butter -- European is tastiest, and a little bit of your favorite jam.