Where did all the angry young women go?

Despite what an older generation of reproductive rights activists says, younger feminists have been here all along 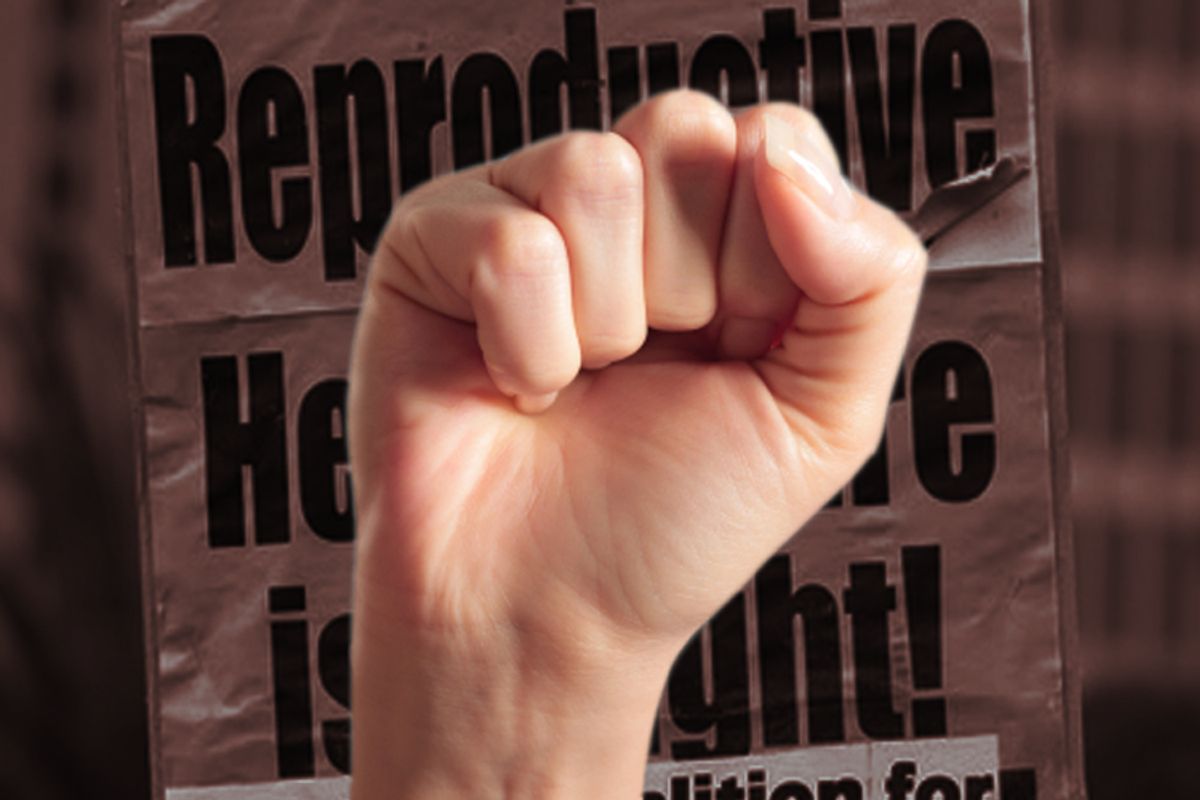 I was struck hard by a story in the latest issue of Newsweek about the purported apathy of young women toward their reproductive rights. The piece, by Sarah Kliff, included an interview with NARAL Pro-Choice America president Nancy Keenan, who called herself part of a "postmenopausal militia" and wrung her hands at the lack of young people who show up to support abortion rights. Telling Kliff about the experience of walking smack into a rally of anti-choice activists, Keenan said, "I just thought, my gosh, they are so young ... there are so many of them, and they are so young." Keenan sees no equivalent youthful surge within her own movement.

But she doesn't seem to be looking very hard. As Newsweek reported, Gallup polling shows that basic support for legal abortion has remained between 75 and 85 percent for the past 35 years, and that "even among young people ... 61 percent were 'pro-choice,' supporting legal abortion in 'all cases' or 'most cases.'" Yet, based on an "intensity gap" in feelings about abortion rights, Keenan and her peers worry that young people don't consider reproductive freedom central to their politics; the Newsweek piece cited one unnamed young woman who didn't worry that her rights were imperiled because the parking lot at her local clinic was always full.

If Kliff had spoken to young women about their interest in abortion politics for her story about youthful interest in abortion politics, she might have heard more about the perspectives of a generation that grew up in a world in which abortion was legal. Yes, it's true. The fact that young women have been raised without knowledge or experience of back-alley abortion does alter the dynamics of their approach. It makes the issue less personal, less urgent, less terrifying. That is part of the victory of Roe v. Wade. Frankly, that support for legal abortion has remained so high for so long is a testament to the enduring commitment of younger women -- who never experienced the atrocities of illegal abortion or lived without the power to control their own bodies -- to the issues of women's health and freedom.

To not acknowledge the changed landscape of feminism's inheritors is a failure on the part of the old, not on the part of the young. If senior activists could get past their own experiences of illegality and 1970's-style activism long enough to effectively communicate with -- to perhaps listen to -- junior activists describe the world as they live in it, perhaps they wouldn't have such a dismal take on the future. But again and again, I have seen smart, admirable, brave older women who cannot seem to see the young faces right in front of them.

Last year, I attended a NARAL luncheon at which an older actress and activist attempted to translate the foreign and exotic universe of youth to the crowd: "They're like Roe v. What?" this speaker said of young women. "They don't know who Kennedy is!" Sitting beside me was a 22-year-old full-time feminist activist who had been checking people into the event that day, who spends her life talking to college women who care very much about abortion, about women's health and women's rights, who know perfectly well what Roe v. Wade is, and probably know who John Kennedy was despite the fact that they actually don't need to know who he was because he is not their president; Barack Obama is. This young woman looked like she wanted to bang her head against the table, not with the embarrassment she was apparently supposed to feel on behalf of her own wifty generation, but with fury at how invisible she and her peers were to the organization she had given up her day to volunteer for.

Last year, former NOW president Kim Gandy supported 33-year-old Latifa Lyles to replace her as president in the NOW national elections. Lyles lost the election to 56-year-old Terry O’Neill. Fair enough; O'Neill should not have lost because of her age any more than Lyles should have lost because of hers. But leaders must stop claiming that there are no young feminists out there, when in fact there are plenty. And many of them have gotten the message that they are not particularly valued by institutional feminism.

Keenan's surprise at the numbers of youthful anti-choice activists should not have made her shake her head at the passivity of those on her side, but to consider instead that her ideological foes have apparently found a way to respect the next generation and perhaps to harness its power. When older pro-choice groups begin treating young women not as ungrateful, unschooled whippersnappers but as powerful women who were raised with different sets of expectations, with new modes of communication and protest, and who face a different set of obstacles, perhaps then they will begin to really see them. Perhaps when these leaders stop demanding that young women acknowledge their history, their priorities, their forms of resistance, and start instead to acknowledge the new kinds of activism that young people, not their elders, have succeeded in creating online, perhaps they will start to be able to make out these phantom young women.

Because they are there. They are everywhere. As my colleague Judy Berman, 25, recently told me, "When I was in undergrad ... everyone except the very religious believed pretty strongly in reproductive rights -- we organized a LOT of young women (and men!) to go to the March for Women's Lives in '04, where, as far as I remember, college women made up the bulk of the marchers." Berman remembers correctly. I was at that march too, and looked around at a sea of young people who seemed eager to stand alongside their elders. The speakers castigated them for not knowing what a coat hanger was used for.

Many of the young women who formed and populate the feminist blogosphere will tell you that they took to the Internet because they found no welcome in institutional women's organizations and decided not to work within a system designed and run by leaders who did not trust them, take them seriously, or show any interest in their opinions. Instead, they set out to create their own approach to women's rights, to reach their own peers in their own way, rather than wait to be acknowledged by their elders. As a result, some feminist institutions indeed find themselves with an age imbalance, membership listing precariously toward the senescent.

The Newsweek piece reports that Keenan and her peers at Planned Parenthood and NOW "will retire in a decade or so." But perhaps if, instead of holding on to their crowns like Queen Elizabeth, they might consider passing them down to women who are frankly far better equipped to communicate with future generations than they are, there would not be quite such a perceived crisis. "It's not that pro-choice activism doesn't interest young women anymore," Berman told me. "It's that doing it through NOW, NARAL, etc., doesn't seem relevant when we have all these online outlets that take us seriously."

That's not to say that the bloggy form of activism is always preferable, or louder, or more effective than older iterations of protest or commentary. There's lots to criticize about a feminist blogosphere, about armchair activism, about the self-interest of the Internet, and about the age-old struggles within feminism that are being repeated, and not necessarily fixed, by today's young activists. I smile when I think of Debra Dickerson's exhortation a year ago that "today's feminists need to blog less and work more." Her chiding pissed off a lot of those  feminists, but in taking them to task, Dickerson was doing a service to young women: She was admitting that she'd paid attention to the ways in which they raised their voices, considering how their forms of expression differed from those of her own generation. Stories like the one in Newsweek don't go that far, and in failing to do so, create a self-fulfilling prophecy. Why should young people announce their investment or their allegiance to organizations that fail even to acknowledge that they exist?

You want young reproductive rights leaders? Look around you. Look to the Internet, look to the junior ranks of your own organizations, to the women checking people in at the door of your events, to the potential of the women whose pictures you put in your brochures, but whose voices you apparently still can't hear. Instead of clinging to your positions of leadership, hand them over. Share some of your power with the women who see the world and its challenges differently than you do, who may feel critical and not always reverential toward the choices of your generation, but who have hope and drive and means to take their experiences and perspectives into the future, instead of muttering defeatedly and getting stuck in the past.