"Inspirational Night" fails to live up to its name, until Mamasox takes the mic and shows us how redemption is done 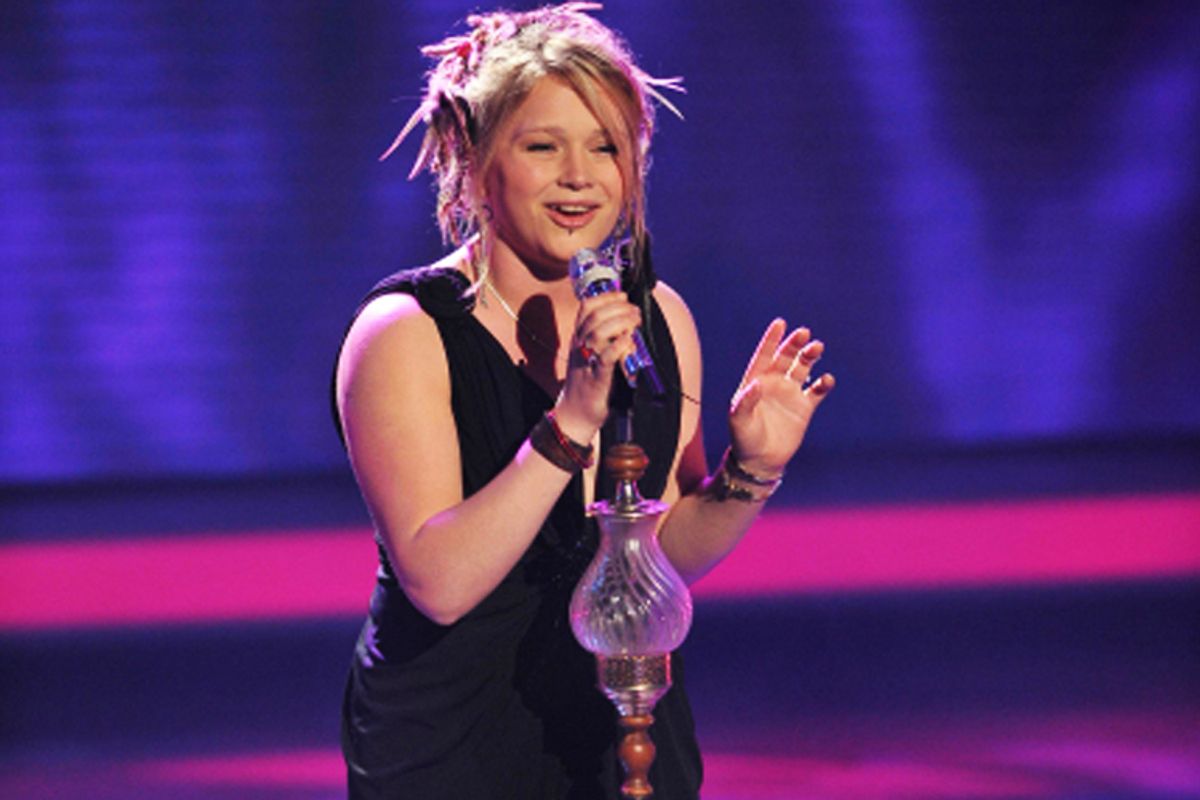 Tuesday night's "American Idol" was "Inspirational Night," and, at the risk of sounding like a non-believer, it wasn't. If you are a regular viewer of sorry and soul-sucking season nine of "American Idol," it will not come as any surprise to you that five out of the seven singers who performed on Tuesday night's show made me lose my religion, right on the spot. If "American Idol" is to faith what faith is to believing in God, then I went from agnostic to atheist in no short order. Given past weeks' performances, I sincerely believed there was no hope for any redemption, not for the show that's been going to hell in a handbasket before my disbelieving eyes.

But maybe miracles do happen and hope does spring eternal.

Alicia Keys, a woman who could make believers out of the most cynical among us, was the mentor for the week. Talk about a god in the music industry. This woman has earned 12 Grammy awards and sold over 30 million records. However, Keys' gentle and compassionate guidance wasn't miraculous enough for most of the contestants, and. quite frankly, Crystal Bowersox and Lee Dewyze would have done as well without her feedback.

Casey James sang "Don't Stop" by Fleetwood Mac. Casey needed to stop. His body was stiff and stilted. His voice was subdued and difficult to hear, at times. Casey tried to pretend to be some mad guitar jammer, without the jam. The song arrangement was less than underwhelming. and I wanted to scream at the TV, "Casey, have you forgotten where you are? Inspire me! Give me some goose bumps, guy!" All I got from that song was one big case of the yawns and new doubts about Casey.

Randy: "Yo: It was a good performance, but it wasn't your best. Every week we're seeing the same thing from you. Give me a little something else." Amen to that, Randy.

Kara: "You come out and it was like jam bam. That's not showing us what makes you different. I'm so frustrated." I couldn't figure out if she meant sexually or musically. When it comes to Kara, I'm usually confused.

Simon: "The theme is inspirational songs. You had zero emotion. You just stood there singing the song, playing the guitar. It was a lazy song choice."

Lee Dewyze sang "The Boxer," a classic Simon and Garfunkel song. Whoa, I loved it! I almost became an instant Pentecostal. Lee took this very simple song and definitely "made it his own." What was that on my arms? Yup, goose bumps! A rare sensation during this disappointing season.

Simon: "The difference between you and Casey was huge. It was sincere, emotional and inspirational. I've never been a massive fan of that song, but you made it sound like it was written a week ago. It was absolutely brilliant." Simon was a believer too.

Tim Urban sang "Better Days" by the Goo Goo Dolls. While Tim may bear some physical resemblance to the band, he certainly didn't sing like them. So there was Tim, doing another slow song, appealing to the audience with his big, sincere eyes while he played his guitar. Tim's voice sounded a bit huskier than it had in the past (artificial male hormones?), but it didn't make a difference. It's gonna take a miracle to save Tim after this performance, despite his devoted tween voting audience.

Simon: "This may have been a step too high for you this week as far as believing in the performance. You have improved over the weeks, but it was a little bit of a letdown." Simon was displaying the patience of a saint.

Aaron Kelly sang "I Believe I Can Fly," a song he has been singing since he was five. According to my calculations, that meant he's been singing it for, what, six years? Alicia thought his only shot was to cry at the end. I was on my knees praying he wouldn't.

Thank God he didn't. Now, no one can deny that Aaron has a good voice, but this interpretation felt old to me. Then he took it up a notch and really started belting out the notes. At one point, Aaron looked and sounded like a beggar, his voice sounded like a screechy plea, not unlike Jimmy Swaggart when he was begging for forgiveness for his transgressions with those wicked temptress hookers. Aaron did have that one good last strong note at the very end of the song. Let's hope it really was the last note we ever have to hear from him.

Randy: "The arrangement was strange, but you have pure vocal talent. You did a good job with a giant song." Coward.

Ellen: "I believe you can fly and you are on your way. That was a tough song and you handled it real good." Keep Ellen away from any cult leaders. She's a real easy target.

Simon: "Knowing you and liking you and having the guts to take it on a big song is one part. But the second part, in the real world, I would have turned off that song in ten seconds. It wasn't very good." Simon is a god.

Siobhan Magnus sang "When You Believe." I was distracted by Siobhan's dress, a very cool dress indeed. A butterfly dress. Again, Siobhan had this magnificent voice that got all swallowed up in vagueness and ambiguity. Siobhan seemed to be trying to inspire the audience with her song, but it came off as more pathetic than uplifting.

Kara: "Technically, it was a really well sung song, but this isn't a musical, and I still feel I don't know who you are."

Simon: "It wasn't the right song for you. The arrangement was too old fashioned. I just found the whole thing a bit all over the place. It's a shame."

Siobhan seemed set in her own beliefs (they say that pride cometh before the fall) and would only insist, "I just loved the song." Siobhan may be the lone prophet not welcome in her own town.

Michael Lynch: Big Mike sang "Hero," which he admitted was out of his comfort zone. Why these contestants don't just follow their gut instincts is beyond me. Big Mike sang a song about flying, but his guitar and the arrangement grounded him. In my humble opinion, Mike should have ditched the guitar and roamed around the stage and made some intimate contact with the audience while he sang a big song with his big voice. But he didn't. Mike didn't fly, he sank.

Randy: "You held your own with it, dawg. It worked out." Remember the 4/20 comment I made last week? Remember the date of Tuesday night's show? Enough said.

Kara: "You didn't cut through and the song was unrecognizable."

Simon: "You sang it pretty well, but once again, the theme is inspirational songs, and that was about Spiderman, wasn't it? That's kind of what bothered me. It felt a little bit artificial. It didn't gel, but I still think you're going to be around next week." I'm still wondering why Spiderman wasn't inspirational.

Crystal Bowersox sang "People Get Ready" -- without any kind of instrument! I was so excited. I've been waiting weeks for Crystal to go solo. Alicia, like so many, named Crystal one of her favorites.

Crystal started without any music, and she didn't need any. She could have sung the whole thing without one single instrument. Crystal's rendition of the song had the angels and saints singing from the rooftops of heaven. People were rolling around in the aisles, throwing up their hands and speaking in tongues. Forget about goose bumps! I had been filled with the Holy Spirit and was jumping up and down in my humble living room screaming, "Praise the Lord, Praise the Lord, Alleluia, Alleluia!"

I became a born-again believer that "American Idol" could actually be redeemed, saved from its lost and depraved ways by its savior, Crystal Bowersox. The kicker was when Crystal got so emotional, she broke down in the last verse of the song. Tears and handkerchiefs came out in the crowd. And, to top things off and make all of us sob even more, she had her stand-up mic from home on stage with her and spoke of her father, who was sitting in the audience.

Randy: "Yo yo. Been a fan since day one. That is how you do it, unbelievable. Gotta give you the Standing O." He did, and so did the audience.

Ellen: "You have never looked more beautiful. You keep evolving and growing."

Kara: "Thank you for putting your guitar down, Mamasox, you just schooled all those contestants."

Simon: "THAT was inspirational. I'm happy to see you emotional because you kind of have closed down a little bit in the past. You sang it fantastically, and for me, it was in a completely different class to everything we heard tonight."

Simon was preaching to the choir.

My top two: Crystal, with Lee a distant second (and Lee was good!).

All the rest… forgettable, really. I can't even remember their names.

Wednesday night's show features "Idol Gives Back," the annual music celebration that has raised more than $140 million to benefit charities around the world and across the United States.

And one contestant will be voted off.  Please, if there is a God, please let Her give the American voter (especially those in the tween age group) the wisdom and guidance to vote off Tim Urban. There are just some people who can never be saved.