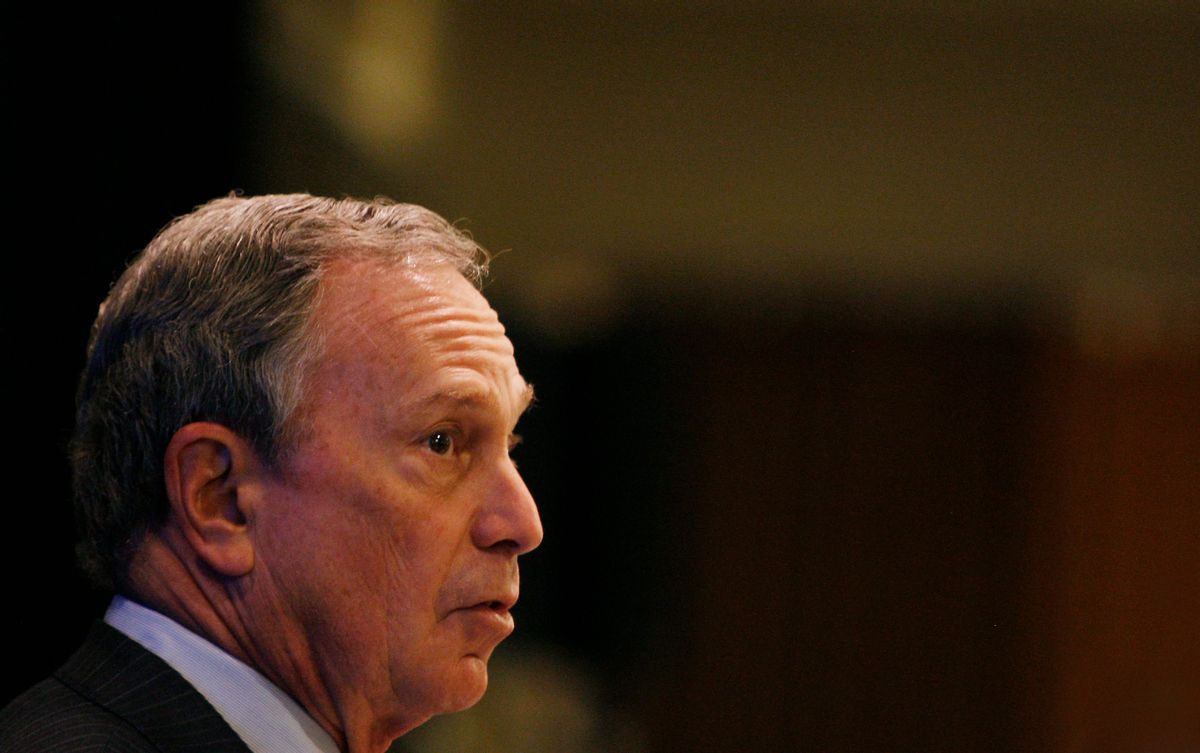 New York City Mayor Michael Bloomberg speaks during an appearance at the The Mayors Summit on Reentry and Employment in New York, February 28, 2008. Bloomberg has decided not to run for the U.S. presidency, he said in the New York Times, ending long-running speculation that he could launch a challenge as an independent candidate. REUTERS/Mike Segar (UNITED STATES) (Reuters)
--

Speculation is mounting lately that Mike Bloomberg will run for president in 2012 as an independent -- but if that is his plan, despite his routine denials, then the mayor may want to clean up his offshore finances. Today’s New York Observer  features an in-depth exploration of the Bloomberg Family Foundation, the multibillion-dollar entity now being used by Hizzoner to advance his political aspirations as well as his policy initiatives.

As the Observer reports, the Bloomberg foundation recently named a new 19-person board that reads like a "who’s who of national politics and finance," including former Florida Gov. Jeb Bush, former Sen. Sam Nunn, D-Ga., and former Treasury Secretary Hank Paulson.

While the foundation supports various works of goodness and charity, its image could nevertheless suffer from the Observer’s revelations about some of its investments abroad:

According to an extensive review of the mayor’s financial records by The Observer, even as Mr. Bloomberg was trying to counter the loss of taxes and other income from the richest New Yorkers, the foundation he controls was in the process of shuttling hundreds of millions of dollars out of the city and into controversial offshore tax havens that would produce nothing at all for the city in terms of tax revenue.

By the end of 2008, the Bloomberg Family Foundation had transferred almost $300 million into various offshore destinations—some of them notorious tax-dodge hideouts. The Caymans and Cyprus. Bermuda and Brazil. Even Mauritius, a speck of an island in the Indian Ocean, off the coast of Madagascar. Other investments were spread around disparate locations, from Japan to Luxembourg to Romania.

What might prove equally troubling to potential Bloomberg supporters is the identity of the financial advisor who directed those investments:

Why was the mayor’s flagship foundation sending hundreds of millions of dollars offshore? Neither the charity nor the mayor will explain. What is clear is that the issue could get prickly for Mr. Bloomberg, in part because his investment strategies have been so closely associated with Steve Rattner, the onetime boy wonder financier who remains under investigation by Attorney General Andrew Cuomo for his involvement in a state pension controversy. Last week, Mr. Rattner’s former firm, Quadrangle Group, took the extraordinary step of excommunicating him, saying in a statement that it “wholly disavow[ed]” Mr. Rattner over his role in securing state pension contracts—conduct the company called “inappropriate, wrong, and unethical.”

On December 26, 2007—the same day that the city’s Conflicts of Interest Board opened the door for Mr. Rattner’s firm to manage the foundation’s money— the foundation immediately sent $210 million to a new fund—“QAM Select Investors (Offshore) Ltd.”—based in the Cayman Islands.

The other question that Bloomberg and his handlers may need to address someday is what the foundation has done with its money, aside from investing in tax havens. Reporter Aram Roston found that the foundation’s tax returns show the mayor “donated more than $1.8 billion to the foundation in its first three years of life ... About $67 million -- $36 million in 2007 and $31 million in 2008 -- was given away. Much of it went to anti-smoking initiatives, including the World Lung Federation and an Indian anti-smoking group; other grants went to the government of Vietnam and the World Health Organization, for injury-prevention efforts. No grants went to organizations directly benefiting New York City.”

In recent years, Bloomberg has made enormous donations to city cultural organizations and charities through the Carnegie Corp. rather than his own foundation. But that support is reportedly ending now -- just as his political aspirations appear to be turning away from New York City and toward that town on the Potomac.

While visiting the Observer, you can also find my column on the "Obama effect" -- how it is measurably improving America’s image overseas and why it matters. (Disclosure: I’m also one of the editors at The Investigative Fund, which provided research support for Roston’s article.)