Viagra for women: The quest for the perfect orgasm

Is a female version of the little blue pill on the horizon? And if so, would that be a good thing? 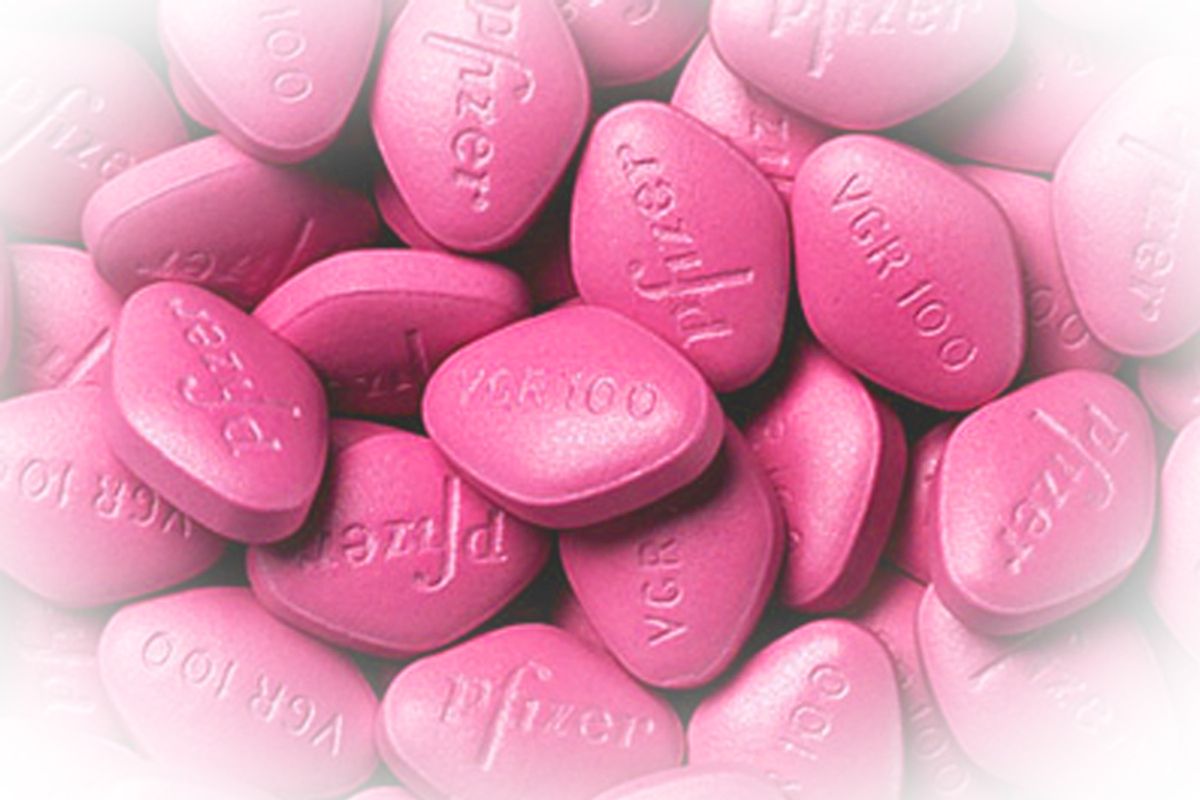 Last week, the media was worked into a breathless frenzy over the potential discovery of a "female Viagra." The results of a new study showed that a prototype drug made by Pfizer, the maker of Viagra, successfully increased blood flow to the genitals -- of female rabbits. That was all it took for news outlets to trumpet the imminent arrival of a sex drug for the ladies.

It was a bit of a déjà vu moment. In the past decade, there have been countless reports that the cure to female sexual arousal disorder (FSAD) -- an umbrella term that can sound awfully reminiscent of the hoary concept of female "frigidity" -- was right around the corner. Filmmaker Liz Canner knows this better than anyone: She spent nine years following the pharmaceutical industry's quest for a "female Viagra" for her documentary, "Orgasm Inc." The project began when she started editing erotic videos for a clinical trial for one such female arousal drug. Canner soon began to suspect that her employer -- along with many other pharmaceutical companies -- were exploiting women in pursuit of big bucks.

That isn't all that difficult to do in a society with a skewed perception of what is sexually "normal." One of the subjects of her film, Charletta, a gray-haired Southern woman in her 60s, went so far as to have electrodes surgically implanted near the base of her spinal cord and connected to a device called, in all seriousness, the "Orgasmatron" -- all because she was disturbed by her inability to climax without clitoral stimulation. She had no clue that the vast majority of women require more than the old in and out to come. The result of the invasive and debilitating surgery was that it caused her leg to twitch uncontrollably.

From Princess Marie Bonaparte, who had her clitoris surgically moved closer to her vagina in hopes of having orgasms during intercourse, to Charletta and her "Orgasmatron" to the current "designer vagina" trend, some women will go to extreme measures to feel sexually adequate and satisfied. Just imagine how many more would be interested in popping a pill for a fulfilling sex life. I chatted with Canner over the phone about this latest study and the search for the Holy Grail of "lady Viagra."

What did you think of the recent media circus?

I was actually really surprised that the media jumped on the study because, to me, it doesn't actually tell us anything. It was a study that was done on bunnies. Well, I guess Hugh Hefner got us confused with bunnies, why not Pfizer? They say that this drug is going to help with female sexual arousal disorder. But all we know is that it's going to work on female sexual arousal disorder in bunnies.

We keep seeing trial after trial where a drug, spray or gel successfully causes a woman's genitals to swell. What more are researchers aiming for, exactly?

For these drugs to be approved by the FDA, they have to cause engorgement, but they also have to cause sexual satisfaction. Viagra causes engorgement of the genitals in men, but [in Pfizer's research] women didn't really care whether they were engorged. Their studies show that women weren't any more sexually satisfied even though they were engorged. They came back and said, "Women are more complicated than we thought."

The FDA actually set different standards for men and women. The end point for Viagra was engorgement -- it wasn't whether the man was sexually satisfied. If a man has orgasmic dysfunction those drugs don't help with orgasms. It's an interesting thing because the reality is that men do care whether their genitals are engorged but women don't.

And yet they keep trying that same approach for women, don't they?

I don't think that the drug industry is going to give up. They see this as a multibillion-dollar industry. We haven't been very educated about sex. Regular sex education rarely talks about where the clitoris is. If you have a population who isn't very educated about sex, it's easy to take advantage of them. They can advertise and convince everyone that there's something wrong with them.

What has changed since you started working on your documentary?

I think unfortunately -- or maybe fortunately -- I don't think we've made any scientific breakthroughs around female sexuality. I think we're headed in the wrong direction. We're looking for a magic bullet, the pill that's going to solve all of women's sexual problems. I'm not sure that a pill or patch or nose spray or surgery is going to cure most of women's sexual problems. It's complex. What we should be working on is a society that doesn't abuse women sexually, because we know that creates sexual problems for women. We should be working on equitable pay and employment. We should be working on comprehensive sex education so that people are fully educated about their bodies. All those resources could have gone toward doing that sort of thing instead.

I feel like every couple months there is a new wave of hype about "female Viagra." Every time it is proclaimed that it's on the horizon – and yet it still isn't here.

It's all about selling drugs as if they're selling you a car in order to keep people anticipating something and believing that it exists -- although I should note that a small percentage of women really do suffer from sexual dysfunction. They want to keep the hype going, so a lot of these drug companies are working with these P.R. firms that are placing these stories. This is why you keep seeing the hype. What we're witnessing right now is a cultural shift, a rewriting of our understanding of female sexuality.

What do you think they will try next?

I don't know, they're trying all sorts of different approaches. Originally, it started out looking at the genitals. They started out thinking, "If we just get women engorged," but it didn't work [as far as increasing sexual pleasure]. So then they moved up to changing the woman's body chemistry and that didn't really work well either: Women were getting breast cancer in the clinical trials. The last thing they were working on was using flibanserin, a drug that affects serotonin levels. It was making women less inhibited and that was being connected to sexual pleasure. A study found that it gave women 0.8 more sexually satisfying experiences than the placebo -- whatever that means. I think they should just start selling sugar pills.