How Politico, and its star reporter, are hurting America

A major profile paints an unsettling portrait of Mike Allen, hotshot Politico reporter, as a sycophant to the elite 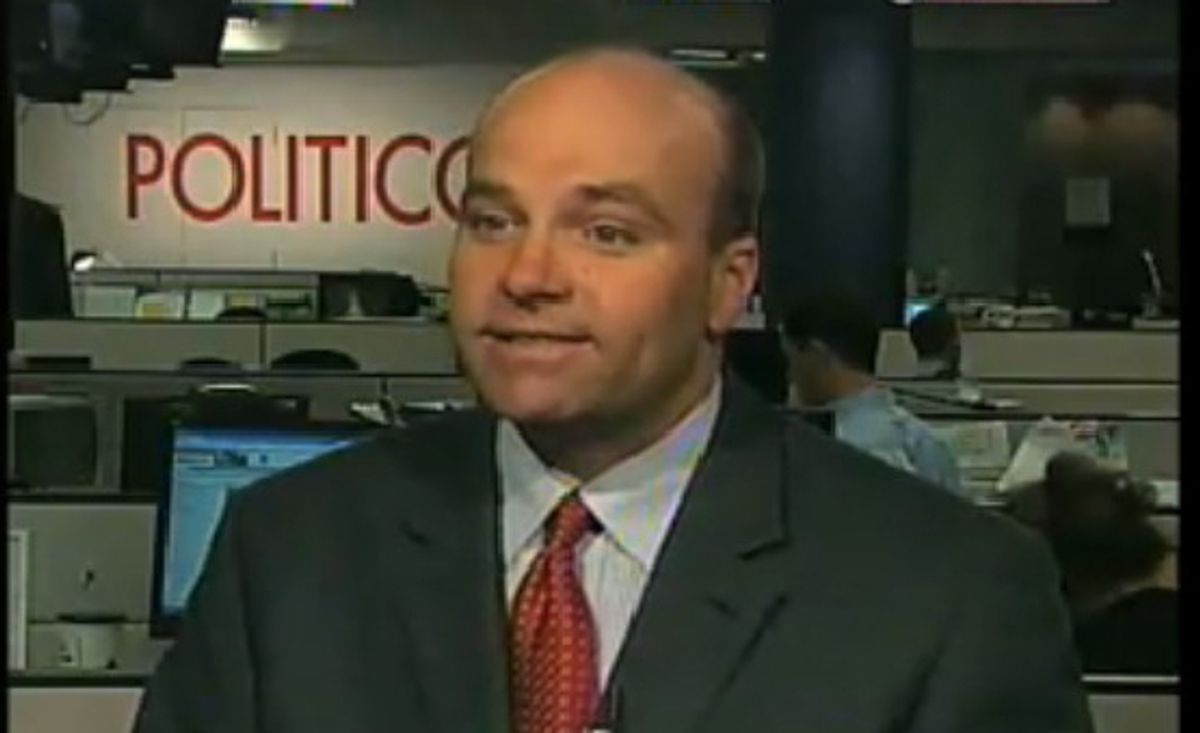 There are, roughly speaking, two strains of the Washington insider disease in journalism. The first is affected high-mindedness. This type is exemplified by columnists like David Broder and Charles Lane at the Washington Post, who love nothing more than bemoaning the replacement of cooperation and comity by political bloodsport.

The second kind of insider is the one who lives for political bloodsport. Here we're talking about gossip artists along the lines of Time's Mark Halperin, and who's up-who's down horse-race-loving commentators like NBC's Chuck Todd and the Washington Post's Chris Cillizza. Above all, in the past few years though, this type of work has been dominated by Politico.

But even though Broder spends his time decrying our coarsened political life while Halperin is busy coarsening it, the two types are still much more alike than they are different. They’re just two sides of the same coin -- an entrenched, clubby and self-obsessed political class. Some guys -- and they are mainly, though not exclusively, guys -- love it when politicians compromise. Some love it when they bicker. Both, however, love politicians, and don't really seem to think anyone else matters much.

There's an amazing illustration of this in this weekend's New York Times Magazine, which will run a long profile of Politico reporter Mike Allen. (It was released online on Wedensday.) Although he’s a genuinely weird figure, Allen is apparently deeply beloved in Washington. His morning update on the politics of the moment (literally, the moment -- this is not the place to look for the long view), called Playbook, is universally read by D.C.'s powerful, which means that Allen himself is a kind of unofficial mayor of the courtiers to the the Washington political class.

Mark Leibovich, who wrote the Times article, noted that Allen seems ubiquitous in Washington, and was constantly welcoming him to events and thanking him for coming to places where he wasn’t the host. This isn't the guy's only odd tic. Leibovich tries to go soft, because he -- like every other political reporter, apparently -- is friends with Allen, but he's too good a journalist to pass over what makes Allen interesting.

His mannerisms resemble an almost childlike mimicry of a politician -- the incessant thanking, deference, greetings, teeth-clenched smiles and ability to project belief in the purity of his own voice and motivations. He speaks in quick and certain cadences, on message, in sound bites, karate-chopping the table for emphasis. (His work is "joyful, exciting," he says. It is a "privilege" to work at Politico with young reporters. "I love this company. I love what I'm doing." And all that.) Over several discussions, Allen repeated full paragraphs almost to the word.

Talking points for a regular person -- that sets off a red flag, doesn't it? Then there's this:

Allen isn't the only writer at Politico, but he is its top star. As soon as the founders got the new publication off the ground, he was their first recruit, and he continues to draw a major chunk of the readership, as well as ad sales, for Playbook. And what's creepy-crawly about Playbook -- and about Allen -- is how much it's the logical conclusion of Washington narcissism.

The guy is plainly obsessed with politicians. He keeps up what Leibovich calls a "friendly scoutmaster" persona, and seems mainly concerned with fading into the background as much as possible so he can soak up precious gossip from the bright stars all around him. It's "don’t mind little old me" as a way of life: Allen literally won't even tell his friends where he lives or what his parents did for a living.

So it's not too surprising that much of Playbook's content seems to boil down to what Sen. Chuck Schumer, D-N.Y., had for lunch. "Playbook is D.C.'s Facebook," says Politico editor Jim VandeHei. But Allen, and Politico in general, don’t actually seem to care at all about politics -- the real stuff of politics. The publication betrays not a hint of interest in the meanings or effects of policy. It has no grounding whatsoever in the structural realities that shape the daily blathering: economic life outside of Washington, the historical background of current events. Politico seems to wake up every morning with no memory of the day before.

This complete lack of concern for grounding reporting in its proper context means that Politico writers often end up as stenographers for whoever wants to feed them information, and publish plainly ridiculous arguments or gossip. Because if someone important is talking, it must be news.

Leibovich's profile of Allen has a lot of amazing scenes, but the best has to be the Washington elite cocktail party, a birthday celebration thrown by a prominent lobbyist for "Meet the Press" producer Betsy Fischer. Who knew this kind of thing was real, and not just a rhetorical ploy for lazy populists?

McAuliffe, the former Democratic National Committee chairman, arrived after the former Republican National Committee chairman Ed Gillespie left. Fox News's Greta Van Susteren had David Axelrod pinned into a corner near a tower of cupcakes. In the basement, a very white, bipartisan Soul Train was getting down to hip-hop. David Gregory, the "Meet the Press" host, and Newsweek's Jon Meacham gave speeches about Fischer. Over by the jambalaya, Alan Greenspan picked up some Mardi Gras beads and placed them around the neck of his wife, NBC's Andrea Mitchell, who bristled and quickly removed them. Allen was there too, of course, but he vanished after a while -- sending an e-mail message later, thanking me for coming.

Allen probably is the nice guy everybody says he is, and I'm not trying to be cruel. But this kind of Washington clubbiness is, as Jon Stewart would say, hurting America. People don't trust the government because they don’t think political elites listen to them. Meanwhile, a celebrated new publication discovers fantastic success by showing just how much political elites listen to each other.

It's hard not to come away from the profile of Allen thinking that there’s a bipartisan quasi-conspiracy to run the country without regard for popular input, and that Allen and Politico both embody and facilitate it. Sure, Republicans and Democrats are engaged in nasty, bitter feuds. But it's like when the prom king and queen split up: they're still not about to go make friends with the nerds outside the clique. And Allen is the sycophantic school paper gossip reporter who can't get enough of the who-cheated-on-who. This is a self-referential world where only politicians matter, no matter what they do, and regular people don't at all.