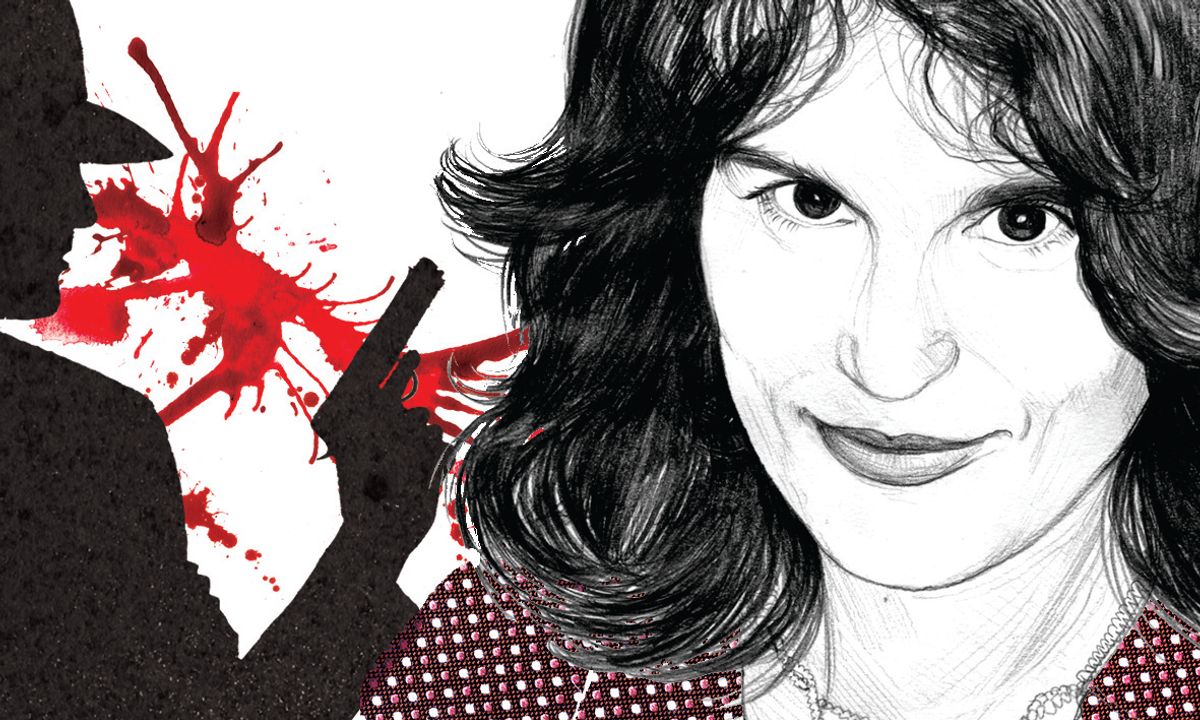 Last summer DC Comics' graphic novel division Vertigo launched a new imprint that, from the standpoint of many people, was a long time in coming. For years a number of crime writers had gravitated towards the comics realm, from Charlie Huston's run with Moon Knight, Greg Rucka's take on "Batman" (expanded into a novel titled "Batman: No Man's Land"), and Duane Swierczynski's interpretations of superhero sidemen "Cable" and the "Immortal Iron Fist."

But there have also been signs of crime writers making dramatic use of comics fomats -- with no capes in sight: Hannah Berry's masterful "Britten and Brulightly," her homage and tweaking of classic detective fiction, Darwyn Cooke's excellent adaptation of Richard Stark's "The Hunter," and "West Coast Blues," Jacques Tardi's slimmed down and speeded up adaptation of Jean-Patrick Manchette's "3 to Kill."

"Dark Entries" dropped John "Hellblazer" Constantine into the emotional quagmire that is a reality show (and illustrated, via Werther Dell'Edera's broad-brushstroke artwork, the torments awaiting the contestants) and Brian Azzarello and Victor Santos's "Filthy Rich" mined Nixon-era exploitation films for its caustic look at fast-fermenting celebrity culture. Both books, however, traveled the common road paved by the ethos of noir fiction, where a decent ending is one where the protagonist doesn't end up in hell. To drive the retro-pulp point home, these and future Vertigo titles deployed a black-and-white color scheme, emphasizing contrast over nuance, overt violence over psychological subtlety.

Having set its tonal template, Vertigo Crime laid low for a few months before starting in earnest at the beginning of 2010. "The Chill," by Jason Starr and Mick Bertilorenzi, was both a wise and nervy choice to start the year: Starr's standalone novels, such as "Hard Feelings" and "The Follower," sustain a mood not unlike the perpetual unscratchable itch on one's back, and go Highsmith-level deep into the sociopathic mind. When he partners with Irishman Ken Bruen, the collaborative efforts ("Bust," "Slide," "The Max") result in gleeful, over-the-top comedy. It's that hybrid voice that seeps into "The Chill," a tale of vicious serial murder in contemporary Manhattan that has its roots in a centuries-old Celtic myth of corrupted feminine power and the transmogrification of sex into death. Starr clearly has fun playing with old-world paranormal storytelling, as does Bertilorenzi with his lurid, Tarantino-esque illustrations of those who kill and are killed.

Oddly, the anti-heroes of both "The Chill" and veteran comics writer Peter Milligan's "The Bronx Kill" share a first name, though their occupations and plights couldn't be any more different. Starr's Martin Cleary is an Irish émigré, a Boston police detective, ensnared in the old-new culture clash because his lost love, Arlana, is embroiled in the escalating crimes. Martin Keane, on the other hand, had no desire to be a cop and emulate his garrulous, hard-drinking old man. Instead he writes, with one successful novel under his belt and a less successful one in the works, happy in a marriage that keeps the dark past at bay. At least until his wife disappears and Martin's the prime suspect, and that past resurfaces, in the form of some nasty family secrets, way up in a desolate, abandoned area -- the "kill," from a Dutch word for stream -- in New York's uppermost borough.

Though the story isn't uplifted by James Romberger's illustrations -- more serviceable than artistic -- Milligan more than makes up by mixing in excerpts from Martin's manuscript, its fragments furthering the story of what happened to Martin's wife. He also saves the best line for the homeless man who haunts the garbage-filled Kill, setting Martin straight on the ultimate source of the place's violence: "it's people that makes people crazy."

That sentiment could easily apply to "Area 10," Christos Gage's work of neurological suspense, which takes self-mutilation to an extreme both natural and horrifying. Ancient cultures considered trepanation -- drilling a hole through the skull -- to be a pain reliever, a stress inducer, and in some instances, a way to see beyond time. Such ideas are thoroughly discredited today, but for NYPD detective Adam Kamen, this form of pseudoscience feels eerily familiar, as his own brain injury in the line of duty happened in similar fashion, and unexplained time perceptions have further ill-explained connections to -- wait for it -- another series of gory murders (in the land of Vertigo Crime, Manhattan is crawling with grisly killers content with ever-more-pornographic methods of murder. Call it an occupational hazard of the comic book world.)

The narrative is fairly standard -- to the point where the beautiful resident shrink, of course, sleeps with Kamen -- but pulls off the mind-bending trick of making you believe long-discredited theories might still have some truth to them. Area 10's main star, though, is the gore (rendered in appropriately gut-churning detail by Chris Samnee's stark artwork). And that seems fitting: if you're going to dive into another realm, shouldn't it take drastic, blood-drenched measures?

Yet none of these graphic novels is Vertigo Crime's darkest. That honor goes to "The Executor," Canadian thriller writer Jon Evans and Italian artist Andrea Mutti's doom-drenched account of a former NHL hockey bruiser who returns to his upstate New York hometown at the posthumous behest of his former girlfriend. Avid genre readers will know how this story will go, because revisiting the past also means unearthing ugly skeletons, but the storyline Evans concocts travels all the way down to Inferno's ninth circle, with side trips into attitudes about Aboriginal culture and the downside of running drugs. Mutti's illustrations also keep the ever-increasing horror show just on the side of reality, such that the bruiser's final acknowledgement of wrongs that can never be righted smack with the force of a cleanly hit puck.

My one criticism of Vertigo Crime to date is that it's been a boys' club, reveling in violence that, while entertainingly lurid, lacks depth. Of course, the comics world is deliberately double-dimensional, and shouldn't apologize for being so. But I can't help but look forward to a planned entry from two sharp-witted female purveyours of contemporary noir, Edgar Award winner Megan Abbott and Edgar nominee Alison Gaylin. Between the two of them their novels run the gamut from Dreiser-like tragedy ("Bury Me Deep") to celebrity-obsession satire ("Trashed").  Their joint graphic effort -- like Christa Faust's "Money Shot," the only Hard Case Crime novel to date by a woman -- should mine some very interesting sociological territory as part of its quest to give the reader some Black Mask-like fun.