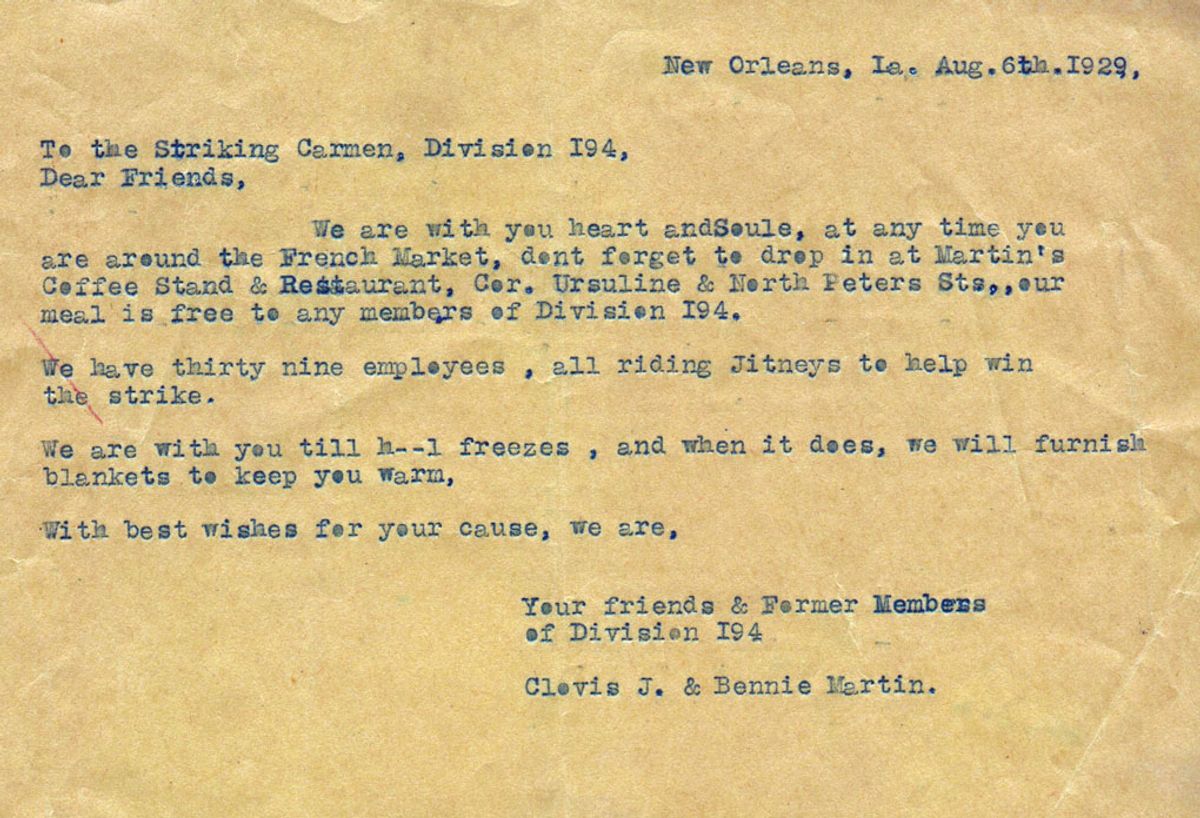 I'm working on a guide to the sandwich glories of New Orleans, but came across something I wanted to share with you right away: the letter that gave birth to the po' boy sandwich -- a fierce, beautiful piece of humanity and lefty worker solidarity.

The history of the po' boy -- New Orleans' answer to the sub, hero and hoagie -- is like all creation myths, maybe a bit murky. There's controversy around the edges, but most people seem to agree that the po' boy was invented by the Martin brothers, Clovis and Bennie, who owned a restaurant and coffee stand in the French Quarter in the 1920s.

When the city's streetcar conductors organized a strike in 1929, the Martins, former conductors themselves, offered to feed any hungry strikers who came their way for free. To do so, they contracted with a baker, John Gendusa, to make exceptionally large, rectangular-shaped loaves of bread that they could fill quickly and cut into sandwiches big enough to feed the strikers and their families.

The strike turned violent and lasted for months, and as more and more streetcar workers came to the Martins' shop, they would call out to each other, "Here comes another poor boy." In hilarious New Orleans fashion, the phrase stuck to the sandwiches.

But it's this letter, that the Martins wrote to the streetcar workers, that caught me yesterday. Its language is so strong, so muscular in its solidarity with the strikers, that I choked up a little. Really, you should click on the link to see it in its full typewritten, typo-ed glory, but it reads:

To the Striking Carmen, Division I94,

We are with you heart and Soul, at any time you are around the French Market, don't forget to drop in at Martin's Coffee Stand and Restaurant, Cor(ner) Ursuline & North Peters Sts. Our meal is free to any members of Division I94.

We have thirty nine employees, all riding Jitneys to help win the strike.

We are with you until h--l freezes, and when it does, we will furnish blankets to keep you warm.

With best wishes to your cause, we are,

Your friends and former members

For more history of the po' boy, check out the Po' Boy Preservation Festival website.