A motley band of misfits face impossible odds and leave carnage in their wake. Sound familiar? 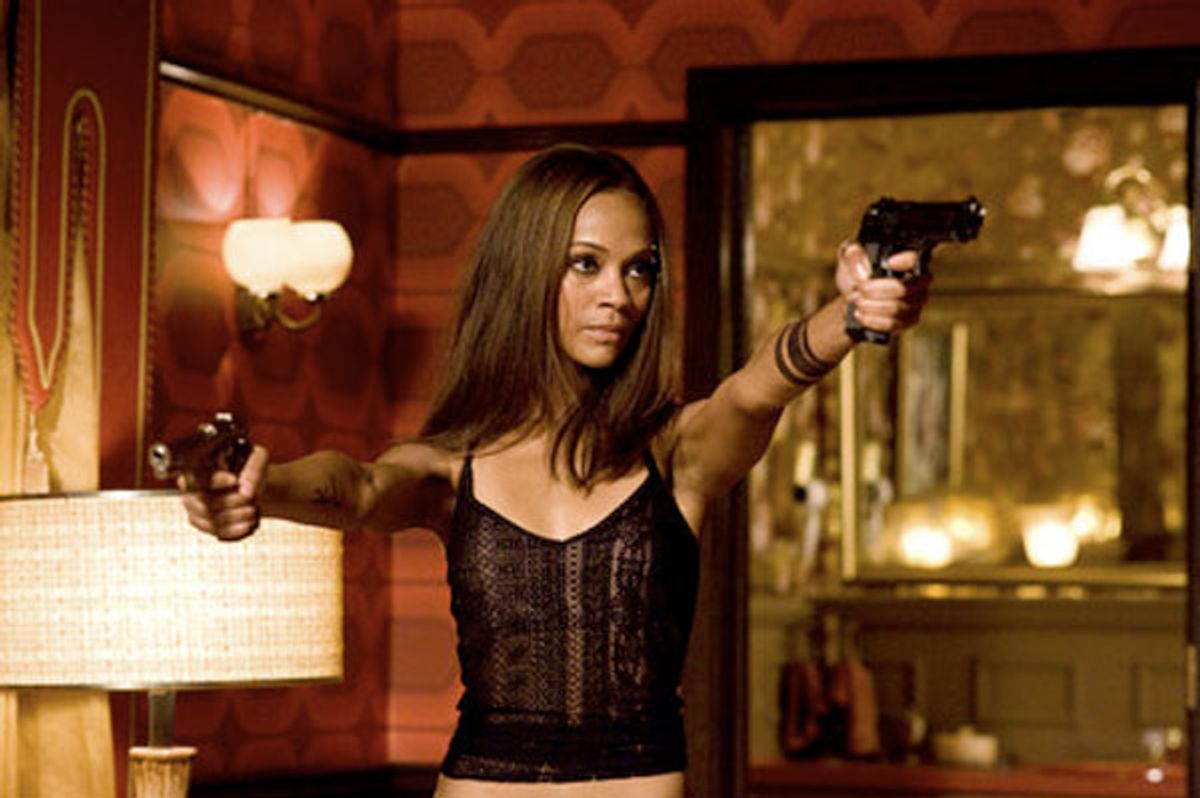 Movies aren't loaded weapons, though sometimes, they do go off when their users aren't careful. Take the bombastic, blithely inchoate "The Losers." It's shinier and noisier than its threadbare design might suggest, much like one of those cheap handguns you'd find in a grimy pawnshop, its nickel-plated surface gleaming luridly through thick layers of smudged glass. As with the pistol, you may not need or want "The Losers." But on any given Saturday night of loathing and longing, you can't take your eyes off it -- and, O my brothers and sisters, do you hate yourself for it or what?

Well, maybe you won't. Maybe you're not at all bored or queasy over the prospect of yet another movie in which a motley band of jovial cutthroats pool their lethal talents, mismatched personalities and (yeah, whatever) rakish charm against impossible odds and improbable situations. If so, consider "The Losers" a heat-seeking missile aimed directly at your frontal lobes with nothing on its makers' minds except total distraction. Don't ask for much, and your expectations will be met. Why invest anything as extraneous or irrelevant as "thought" into such a transaction?

Fine. Don't. Just listen to the white noise and stare at the carnage, which begins with what starts out as a well-coordinated assault on a Bolivian drug lord's compound by a Special Forces unit led by "Colonel" Clay (Jeffrey Dean Morgan), a veteran so grizzled that his grizzles have grizzles. His four-man team includes Roque ("The Wire's" Idris Elba), a mercurial demolitions expert who prefers big-ass blades to large-scale explosives; Pooch (Columbus Short), a family guy who's in charge of transport; Cougar (Oscar Jaenada), your standard-issue scowling sniper; and Jenson (Chris Evans), a buff, bespectacled tech wizard, who may as well be walking around this hoary old neighborhood with a neon sign flashing "comedy relief" on his forehead.

You can guess within seconds that their mission's going to hit a snag and, sure enough, something Very Bad and Really Gross happens. (Nothing gets an audience's collective teeth grinding like the mass killing of fresh-faced children, particularly when there's nothing left of them but a smoldering hunk of teddy bear.) Clay and his team are marooned in Bolivia, presumed dead from the same bomb that killed the kids. Their gloomy exile is curtailed by a sultry young toughie named Aisha (Zoe Saldana), who promises to give team members their lives back in exchange for helping her take out Max (Jason Patric), a malevolent CIA something-or-other who set them up for certain death.

As noted earlier, all this stuff moves too fast for any sustained contemplation. (This is, after all, co-produced by Joel Silver, eminent impresario of heavy-metal movie violence who helped make "Lethal Weapon" and its sequels.) Still, you have questions: Why is it necessary for Clay and Aisha to meet-cute with scissor kicks and elbow punches before setting a hotel on fire? What CIA protocol allows Max to shoot a woman operative to death for failing to keep an umbrella over his head, to say nothing of wanting to cave in most of Southern California with a super nuke? Why would Roque want to kill Aisha when all he knows about her (at the time) is that she's going to help them kill the guy who sold them out?

Even with its storyline's clichés and inconsistencies waved in your face, director Sylvian White's entry into the action-movie sweepstakes emits a frustrating aura of clutter and compromise. Inspired by the graphic-novel series from DC Comics' genre-bending Vertigo imprint (whose writer, Andy Diggle, claims "Lethal Weapon" scriptwriter Shane Black as an influence), "The Losers" struggles to sustain an antic wit that flickers on and off throughout like a weak fluorescent bulb.

You count on Evans, designated joker in the "Fantastic Four" movies, to be That Guy in the movie who is so hip to the jive that he keeps the cheesy smell from seeping through the screen. (Bill Murray used to be That Guy.) Evans tries hard, but his goofball patter and geeky swagger veer into aggressiveness that too easily blends in with the rest of the movie's bluster. So it's left to Patric, a little jowlier and far livelier than he was as an action hero in "Speed 2," to carry what little self-deprecating irony there is in "The Losers." You wish he had more to do here and, maybe, someone smart will figure out a better use for this smarmy, gimlet-eyed upgrade of Patric's persona. In a Hollywood ruled by anything-for-a-buck pawnbrokers, that possibility seems as remote as a plausible explanation for anything that happens in "The Losers."

Gene Seymour writes about film, jazz and anything shiny or incongruous that catches his interest. He did this for Newsday between 1990 and 2008. His articles have also appeared in the Nation, Washington Post, New York Times, Entertainment Weekly and American Heritage. He's a contributor to "The Oxford Companion to Jazz" and the author of "Jazz: the Great American Art." He lives in Brooklyn, N.Y.