In HBO's understated biopic, the notoriously hammy actor does something truly riveting: He disappears 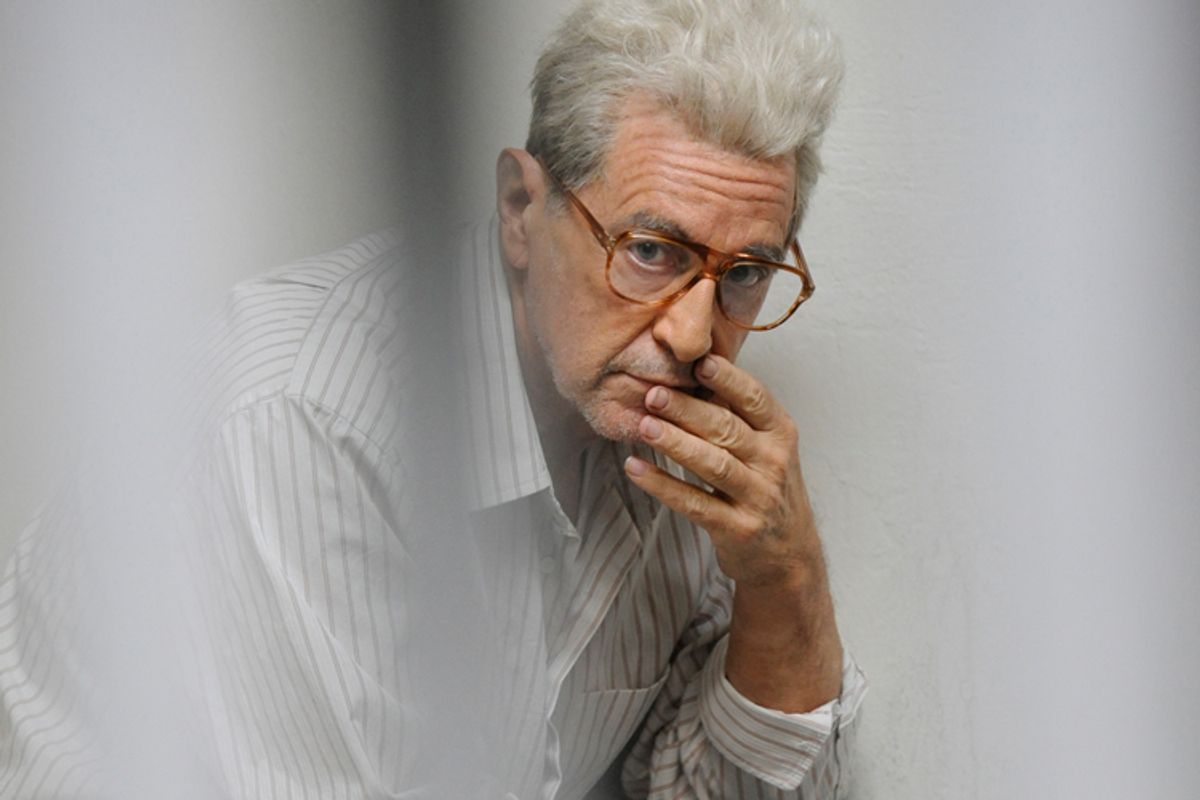 Most Americans are willfully ignorant about death. We cling so desperately to our distractions, our novelties, our money, our diversions, all with the illusion that we can put off death indefinitely, that any direct talk of death makes us uncomfortable.

"We're all going to die someday," the realist tells us. "We get older and older, and eventually, we die."

"Jesus, could you stop being so negative?" we respond.

"It's really best to plan for it before it happens, so we have some control over how it goes," the realist counters.

"Plan for it? God, you're morbid," we say, turning back to our iPhones to tweet about the fantastic pastrami we had for lunch.

We actively divert our attention from death each day, and then one day, there it is, rudely interrupting our normal routines, and we're bewildered by how cruel and callous the world suddenly seems. Doctors who refuse to weep with us! Coroners who go about their business as if they do this several times a day! Funeral home directors who gesture gracefully to a plentiful box of tissue, pursing their lips in a grotesque affectation of heartfelt sympathy! It's all so macabre, yet so mundane! It's just so wrong.

This is the framework in which we encounter Jack Kevorkian, aka Doctor Death, the advocate for physician-assisted suicide. "Death? Suicide? Physician?!" we shriek. "Who is this creepy guy?"

But HBO's Kevorkian biopic, "You Don't Know Jack" (premieres 9 p.m. Saturday, April 24), offers a more mundane picture of Kevorkian, and of death itself: Patients neither weep inconsolably nor smile sweetly like those brave souls on "Grey's Anatomy," nor do they close their eyes in an instant as their friends and family hold hands in a circle, singing softly. Death may bring relief to Kevorkian's patients, but in the end, the dying patient and his or her loved ones hardly know what to say. They look at each other questioningly. They hold hands and try to smile. "You're so brave," one woman tells her husband. Another dying woman simply thanks Kevorkian for helping her, the two squeezed together in his VW van because there's nowhere else to do this.

The mundane reality of death is something we don't anticipate, something we can't bear, at some level, thanks to a lifetime of being spoon-fed valiant stories of the soldier who speaks a few brave words then dies on cue or the old man who lies in his bed at home, receiving loving visitors with warmth and clarity. By presenting death -- and Kevorkian himself -- unadorned by the usual comforting clichés, director Barry Levinson and screenwriter Adam Mazer not only do justice to Kevorkian's story, but they also do justice to his very humble cause.

"Is this the face of a killer?" That's what the promotional posters for "You Don't Know Jack" say, under a close-up of Al Pacino's face. Is Scarface a killer? Is that a trick question?

Miraculously, though, in "You Don't Know Jack," Al Pacino makes us forget every other role he's ever played. Instead of bringing more Pacino to the table than anything else -- the macho growling, the eye rolling, the almost poetic line readings, the exaggerated rage -- the actor brings low-key eccentric Jack Kevorkian to life. Direct but unassuming, confident but ambivalent about the spotlight, Kevorkian allows Pacino the chance to do something he's only been able to do a few times in his long acting career: disappear.

Along with the pleasure of watching Pacino flesh out this strange, stubborn man, bickering amiably with his friends in a scratchy Midwestern accent at poker night or matter-of-factly interviewing patients about why they want to end their lives, HBO's biopic demonstrates beautifully how the profile of a strange controversial figure like Kevorkian can be transformed into a moving, eye-opening story. Like Kevorkian himself, this film isn't a splashy attention seeker, but its charms are apparent within the first few minutes, from Jack's rambling, off-topic conversations with his friend Neal Nicol (John Goodman) to his humble little apartment, with its odd ambient light and framed photographs. Instead of glamorizing Kevorkian or making him appear more heroic or more suave than he is, the filmmakers embrace the down-to-earth nature of his life and his choices. Each scene, each shot reflects this perspective: the wide angle of Kevorkian crouched under his VW van, working on it, as activist Janet Good (Susan Sarandon) approaches to tell him she's sorry she couldn't help him with his first patient; the off-kilter banter with his sister Margo (Brenda Vaccaro) that always skitters around the darkness of what Kevorkian is taking on.

Most important, "You Don't Know Jack" presents what many of us missed back when Kevorkian's face was on all the magazine covers, navigating the kind of media storm that can make even the most unassuming idealist look like a grandstanding opportunist. Despite the grim nickname "Doctor Death," despite the disturbing nature of what he did, rigging up tubes or gas masks to help terminally ill patients die, Kevorkian's aims were anything but morbid. After watching helplessly as his mother died slowly in the hospital, lingering on, in pain, unable to speak, he decided to challenge the accepted approach to death in this country, an approach that he saw as inhumane at best, downright savage at worst.

Death doesn't have to unfold the way we assume it does, Kevorkian argued. No one should necessarily have to accept years of suffering through whatever extended nightmare awaits them, in the hospital, in hospice, in the nursing home. Death isn't some frightening, terrible thing. Just because we spend most of our lives trying to avoid its very existence, just because it's depicted in books and movies and works of art as some shadowy, mysterious, dramatic presence, that doesn't mean we're utterly powerless in the face of it. As taboo as it is to look at it directly or to dictate its terms, death can simply be a choice to stop living.

Kevorkian himself didn't always make the most rational choices. After helping 130 terminal patients end their own lives, Kevorkian had the audacity to show footage of himself administering a lethal injection to an ALS patient on "60 Minutes," after which he openly dared authorities to do something about it. He then represented himself in his murder trial -- stubborn idealists as passionate as Kevorkian aren't always so open to advice in these matters -- and subsequently spent eight years of his life in jail. Even as we witness Kevorkian skidding off the tracks, as his friends and former lawyer look on, cringing, it's hard not to admire his tenacious adherence to his own principles. He didn't want to help people behind closed doors, he wanted to change the laws of the land. He accepted his fate with an understated shrug. In his mind, he really had no choice. "When a law is deemed immoral by you," he tells anyone who'll listen, "you must disobey it."

The film conjures a complicated picture of Kevorkian. But even with such witty, touching dialogue and such a moving performance by Pacino, what we remember most clearly at the end of this film are Kevorkian's patients. These people didn't see Kevorkian as "Doctor Death," they saw him as an angel, one who might finally deliver them from their suffering.