Why I finally joined a church

I was a religious skeptic who bristled at joining a community. But two things changed that: My kids 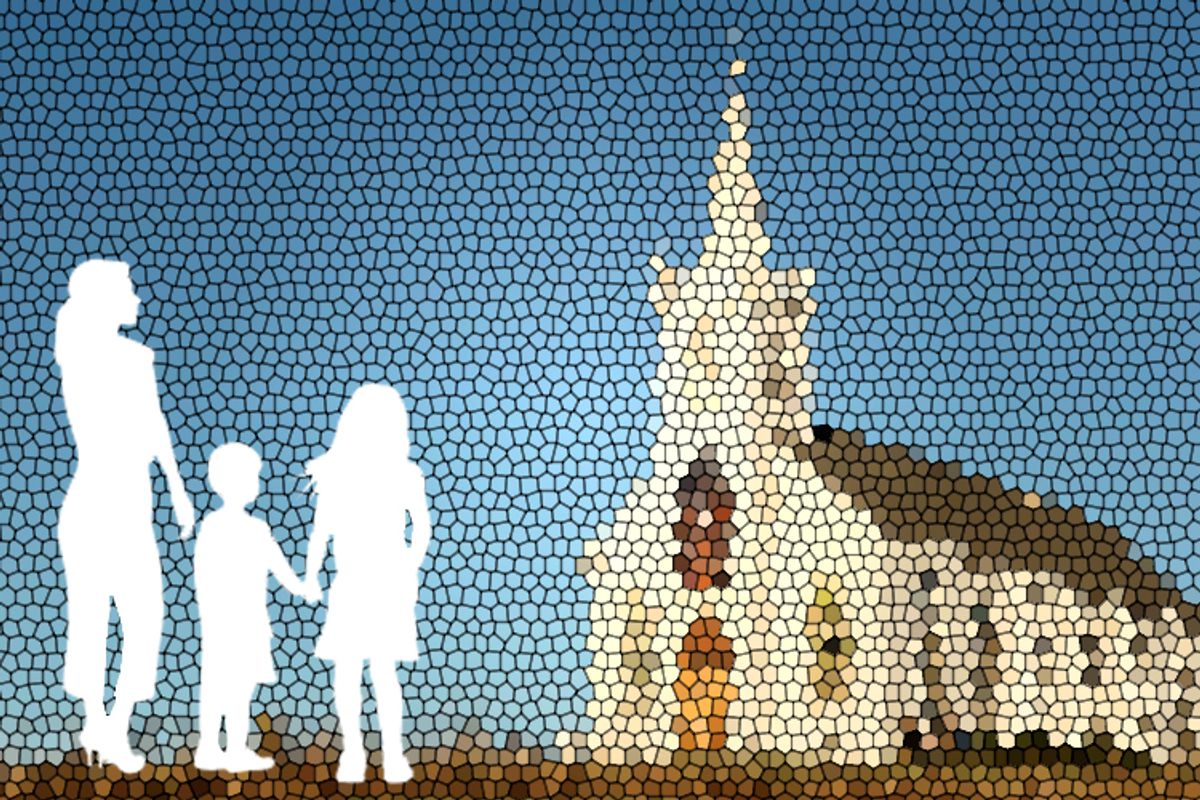 Our family just joined a church.

This may not sound like a radical statement -- not here in America, arguably the churchiest nation in the world. But hearing these words from my own mouth feels about as natural as, "I've just joined the Marines."

Granted, the church in question is Unitarian Universalist, a relatively laid-back faith whose central tenet is that all religions have wisdom to offer, and that we must love one another -- and recycle. But it's still a religious community, a culture I haven't been a part of for more than 15 years.

When I was growing up, my family was active in a Congregational church. I sang in the choir, did Sunday school and youth group, and was confirmed at 14. The whole shebang. But by my late teens, I'd begun questioning the notion that Jesus was anything more than a charismatic leader who got a lot of things right. By college, I considered myself Christian only in heritage and love of Christmas.

I'd also grown wary of organizations, period. Whereas my high school career was dominated by endless clubs and activities, by college I was done with the Tracy Flick routine -- tired of meetings and obligations and bickering about minutiae. For the next 15 years, I avoided extracurricular commitments of any kind. I was captain of my own ship. Joining a church would have been unthinkable.

My husband, meanwhile, has a Jewish mother and an Episcopalian father, neither of them very religious. As a child, he was exposed to both traditions, but in a primarily secular context. Above all, he was taught to be skeptical about religion and religious institutions. If I was an anti-joiner by my early 20s, he'd basically been one since birth.

So why, now, have we gone and joined a church? We who, until recently, couldn't handle being members of anything beyond Netflix?

In a word, children.

Our twin daughters are only 3. Currently, their Big Questions are mostly along the lines of "Where is my Cookie Monster doll?" and "Why can't I have more raisins?"

But it won't be long before they'll start asking what happens to people after they die, and why so many bad things happen in the world, and whether or not there's a God. There will be other, less metaphysical religious questions we'll need to answer. Like: Who is that lady in the blue dress standing in the clamshell in our neighbor's yard? And can we get one?

By being a part of a U.U. church and going to religious education classes, our girls will learn about their Judeo-Christian heritage and any number of other religious traditions. They'll be given a framework for thinking about spiritual matters and be exposed to principles and ideas that we value, in a context other than our own parenting. They will get, we hope, a spiritual grounding that will allow them to choose -- or refuse -- their own paths as they get older.

But there's more to our decision than just this heady spirituality stuff. Because there's more to a church -- this one, anyway -- than just services and Sunday school. There are fundraisers, social events, service projects, study groups, retreats and, of course, committees. Oh, the committees.

It's precisely the sort of join-o-rama I've avoided for most of my adulthood. But although there's a part of me that still resists, quite fiercely, I'm trying to embrace it again.

I want my children to see that a group of people can work together, give of their time and talents, and support each other through life's joys and sorrows not because they're family or even necessarily friends, but because they believe that it's an important part of being human.

I also want to expose them to good, old-fashioned community in a world where, increasingly, community happens only in virtual spaces. I'm a huge fan of blogs, Facebook and Twitter, but I don't think there will ever be a substitute for sharing the same physical space with a group of people -- having conversations, making music together, offering each other a handshake, a smile, or a word of sympathy.

I know how earnest this sounds, and the cynic in me cringes to type the words. But the rest of me believes this is the stuff that matters. My girls will figure out irony and irreverence and how to craft a pithy, 140-character dispatch on their own -- probably sooner than I think. But before that happens, I want to make damned sure they understand kindness, empathy and respect for other people. Of course, joining a religious community isn't the only way to do this. But it's a way to practice and think about these values on a regular basis, with intention. Lord knows I could use the practice, too.

Jane Roper is the author of Baby Squared, a narrative blog for Babble.com. Her first novel, "Eden Lake," will be published in 2011 by Last Light Studio. She lives and writes in the Boston area. Her website is www.janeroper.com.

Jane Roper’s memoir of twin pregnancy, parenting and clinical depression, "Double Time," will be published in May by St. Martin’s Press. She blogs at Baby Squared on Babble, and lives in the Boston area.