"Stuff": The psychology of hoarding

Their love of stuff made their homes unlivable. An expert offers insight -- and horror stories 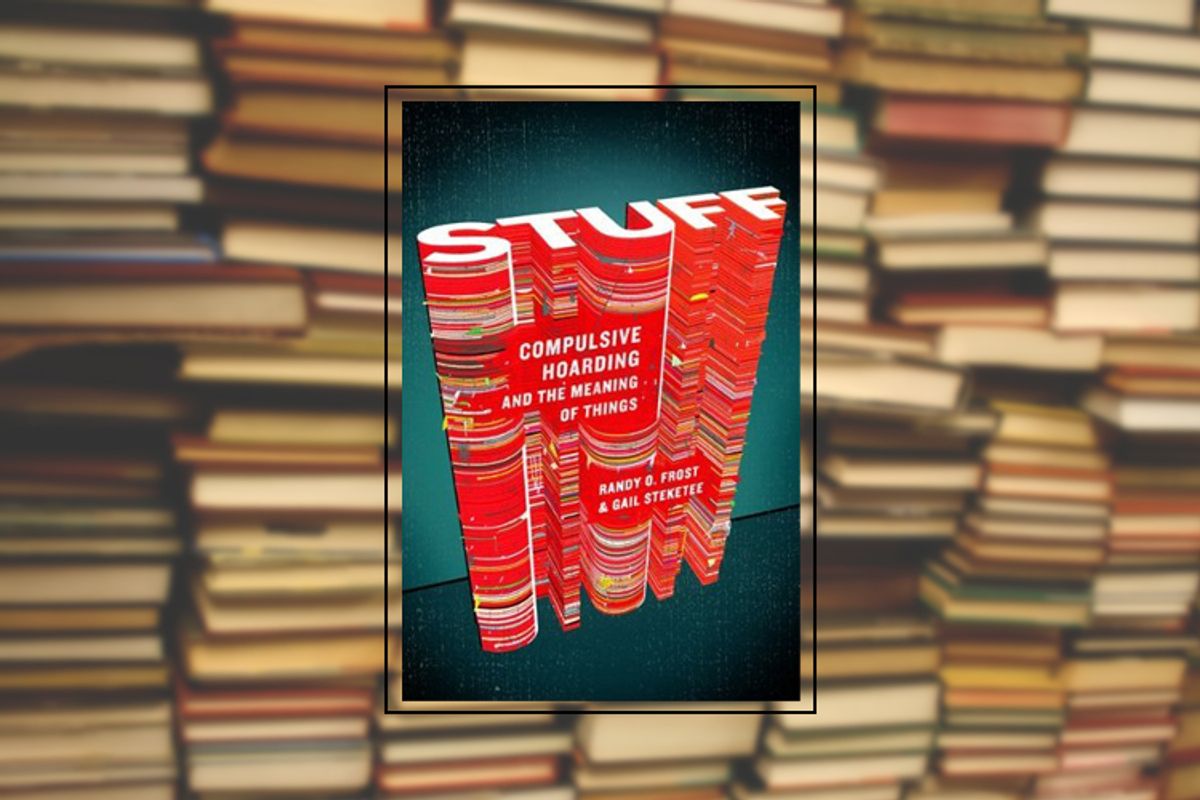 America's most notorious case of hoarding came to light on March 21, 1947, when New York City police were called to investigate a dead body in a three-story Harlem brownstone. The building belonged to two elderly brothers, Langley and Homer Collyer, and when the cops made it into the building, they were shocked by what they saw: piles of junk -- including 14 pianos, a Model T Ford and the remains of a two-headed fetus -- that reached to the ceiling, and a system of tunnels in which Homer and Langley were found dead, one crushed to death by a pile of things, the other dead of starvation.

The story of the Collyer brothers may be an extreme and tragic example of hoarding, but it's not nearly as unique as you might think. As Randy O. Frost and Gail Steketee, professors at Smith College and Boston University and two of the first people to study hoarding in America, explain in their compassionate new book, "Stuff: Compulsive Hoarding and the Meaning of Things," there are more than 6 million hoarders in the United States. Many have had their lives made miserable by their uncontrollable desire to collect everything from garbage to pets -- a desire that often leads them to turn their houses into dangerous and unlivable firetraps.

Through a series of visits and interviews with hoarders, the authors explain how the affliction can destroy marriages, turn children against their parents, and, in one especially memorable case, transform a New York condominium into an unsanitary nightmare populated by thousands of cockroaches. Hoarding has experienced a bit of a pop cultural moment in recent years, mostly thanks to A&E's "Hoarders" and TLC's "Hoarding: Buried Alive," but "Stuff" is worth reading not only because of the authors' authority on the subject, but also because of its elegant prose, and its nuanced and well-researched take on the subject.

Salon spoke with Frost over the phone about American materialism, TV's hoardersploitation trend and what happens to children of hoarded homes.

A lot of the cases you describe in the book are quite extreme -- people who lose spouses or go bankrupt because of their hoarding problem. What causes them to let possessions take over their lives?

One is a sense of intense responsibility for objects and an unwillingness to waste them. Another is this sense of objects as opportunities. One of the hoarders in the book compares her hoarding to a "river of possibilities," because each object is a world of possibility for her. And then there's the emotional or magical quality that possessions have. They connect people to the world. For that particular hoarder, her possessions connected her to the world around her and without them she felt she would somehow lose that. They were also a part of her identity; if she got rid of them she would lose a piece of herself.

And then there's an aesthetic quality to the hoarding. Another hoarder we wrote about in the book created piles from stuff that she’d collected, and at some point, this pile became a work of art. When most of us look at an object like a bottle cap, we think, "This is useless," but a hoarder sees the shape and the color and the texture and the form. All these details give it value. Hoarding may not be a deficiency at all -- it may be a special gift or a special ability. The problem is being able to control it.

Most people expect hoarders to be socially reclusive and incapable of human interaction, but so many of the people you profile in the book are in fact extremely charming.

Exactly. But what does happen with these people is that they become more isolated as they get older and that’s in part because family members try to help them, then problems break out and the family fractures and eventually rejects the hoarder because they can’t tolerate being in their home. And then, because the hoarder can’t have anyone over, they don’t have the ability to reciprocate friendships. Hoarders often don’t have problems interpersonally, it’s just that the situation they find themselves in limits the kinds of contacts they can make.

When confronted with a hoarder in their family, most people would be inclined just to tell them, "All these objects are meaningless," and throw them away. That would probably be the first thing I'd do.

Well, part of the problem is that the people who hoard are themselves ambivalent. On the one hand, they realize their life is complicated: They have all this clutter and it would be good if they could just do something about it. But on the other hand, they’re so attached to this stuff that they can’t. If a family member comes in and starts arguing on one side of this equation -- "Why don't you get rid of this stuff because of X, Y and Z?" -- then the person with the hoarding problem will naturally take the other side of the equation. What needs to happen is for the hoarder to argue this out on their own by bouncing ideas off somebody, rather than having a person there who takes one side of the argument.

What about children who grow up around hoarding? How are they affected?

It affects them in an unfortunate way, and it seems to happen mostly if they live in a hoarded home before the age of 10. The amount of hostility that is expressed by the children to the parent is pretty extreme when they get to be adults, and a really unfortunate consequence of this behavior is that their relationship may be so difficult that they can’t transcend that hostility. There's also a tendency to have social anxiety, feel uncomfortable having other people over as an adult.

What was the most memorable hoard you encountered in your research?

The most memorable I encountered in terms of sanitary conditions is an apartment I describe in the book that belongs to a man named Daniel, that was filled with trash. As we walked into the apartment the whole door frame seemed to move a little bit. But it was actually the cockroaches that surrounded it that were moving. They were on the walls and the apartment had a pungent cockroach dung smell. It was pretty hard to be in that apartment for very long.

There are others where I've walked in and there were papers all the way up to the ceiling, and I wondered whether something was going to come crashing down on me. When I first started going into these homes, I was struck by their darkness, and wondered if people who hoard have this tendency to want to be encased in a protective shell.

It all boils down to the level of distress that the person or people around them experience. If you can’t eat at your table, if you can’t sit on your couch, if you can’t sleep on your bed, then those things are all impairments that occur as a result of hoarding, and that’s the tipping point, from when it’s just a set of behaviors and eccentricities to where it’s a disorder that needs some attention.

Shows like "Hoarders" and "Hoarding: Buried Alive" have given hoarding a higher profile. Why do you think these shows have so much appeal?

If you go into a hoarder's home with a crew of people who are designed to throw stuff out, you’re going to see crisis. You’re going to see someone experiencing a trauma. It’s not like other reality TV shows where people take on this persona and they act differently in front of the camera than they would otherwise. These people are under the control of their possessions, they’re locked in, and so they react this way because they can’t react any other way.

There's also an appeal because, on the one hand, hoarding seems bizarre to us, but on the other hand, it’s a reflection of something that all of us have with respect to our possessions. They're exaggerated versions of us.

Do you think these shows are exploitative?

If you spend one weekend with someone with a camera crew, a cleaning crew and no therapy, you’re making some educational contribution by showing people what hoarding is -- and that it’s really an illness -- but it gives the impression that what you should do with someone who has this type of problem is bring in a cleaning crew and start pressuring them. But if you do that when the person isn't ready, the home will be back to its original state, or even worse, in short order.

You can’t change this behavior in TV time; it’s a long-term process. But that's not as dramatic as when you’ve got a burly cleaning crew throwing out someone’s prized collection of 10-year-old newspapers. In our treatment, we start with having somebody throw out a single item, and the purpose of the treatment is not to clear the clutter, the purpose is to change the behavior and to change the nature of these people's attachments to possessions. Once those things change, then the clutter will be easier to deal with.

Different cultures have different attitudes toward objects. Can we blame hoarding behavior on American materialism?

I think it might make it worse, but it’s clearly not a major component. If you take someone who's highly materialistic, who buys cars as a part of their identity, these are outward signs to the world saying, "This is who I am." In hoarding, the interest is not to show the world who you are, but to experience the objects. Though I suspect that any culture that has a large number of inexpensive and accessible objects is probably going to be one where there’s more hoarding.