How to get health advice online: A doctor's guide

Physicians may debate the Web's influence, but patients must simply be savvy when they seek a medical diagnosis 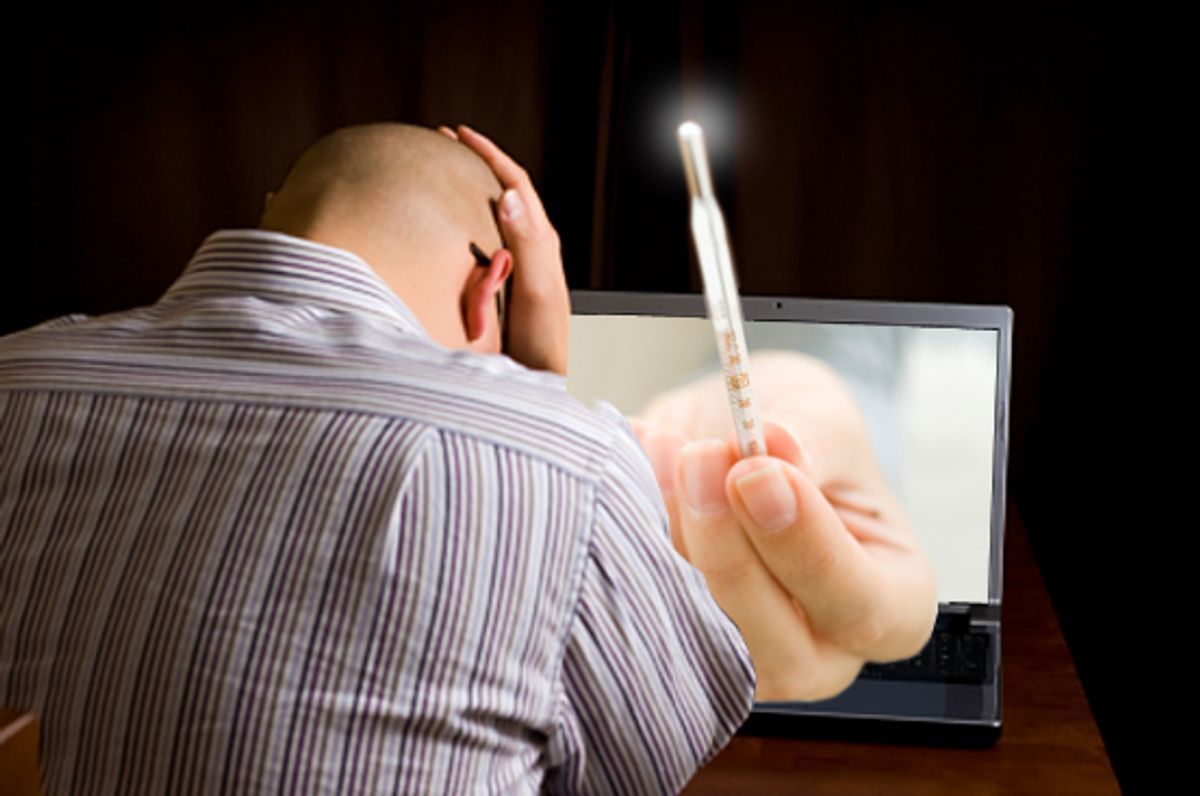 A recent article in the New England Journal of Medicine by Harvard doctors Jerome Groopman and Pamela Hartzband fired up a decade-long debate about patients who use the Internet to learn about their health. Though the physicians praised the Web for fundamentally changing the doctor-patient relationship, giving more control to patients than ever before, they went on to sound the alarm. "Falsehoods are easily and rapidly propagated on the Internet," they sternly cautioned. And for hypochondriacs, the Web is "perilous."

Many e-patients, as they're called, were not pleased. "Dear Dr. Hartzbrand & Dr. Groopman: The Internet is here to stay. Let's move on," tweeted Susannah Fox of the influential Pew Internet and American Life Project, which closely follows e-health trends. Gilles Frydman, the founder of one of the largest cancer support websites, chimed in: "I was saddened to see that [the] opinion piece shows one more time that many doctors remain uncomfortable about rebalancing the control to a more transparent system ... there is no examination of the positive aspects of the growing number of informed, activated and engaged networked patients," he wrote.

It was the old medical establishment versus a new cadre of Internet-informed e-patients, and as such, it reminded me of a spat two years ago, when Time magazine's medical columnist Dr. Scott Haig called patients using the Internet "brainsuckers." That essay was nothing more than a petulant rant. Groopman and Hartzband, on the other hand, raise valid concerns about the uneasy alliance of health and technology at a time when the Internet's presence in our lives keeps growing. Don't misunderstand: I encourage my patients to use the Web -- to better understand health and medicine, and to hold doctors accountable for their decisions. But in my experience, many patients are not as savvy as Gilles Frydman and his fellow e-patients. The truth is, the Internet cuts both ways. Let's dial down the rhetoric and get on with something more important: helping others be smarter health consumers on the Web.

Frydman is certainly right that the Internet can empower patients, in turn promoting sensible medicine. I'll illustrate with the following story: An infant in my practice developed severe constipation. When the therapies we tried didn't help, I began to suspect a condition called Hirschsprung's disease, in which a child is born lacking nerves to the parts of the rectum and lower colon that help them have bowel movements. I saw them in my office for an exam. The parents had done research on the Web before they came to see me, so they knew about Hirschsprung's disease and that it would entail a referral to a specialist and a biopsy to diagnose it. They were anxious, no doubt, but they also came prepared with questions enabling us to get their child the right care.

Groopman and Hartzband are also right that e-patients have plenty to be cautious about. When they are not, the risks of the Internet outstrip its benefits, driving up cost, lowering quality and hurting the doctor-patient relationship. Again, a story from my own practice: I recently saw a teenager who had multiple minor complaints -- a little fatigue, a string of recent colds, some sores in the mouth being treated by the dentist. Her mother pushed a piece of paper at me, asking me to order a specialized test for Lyme disease, one that I had never seen or heard of. The mother, having done Internet research and communicated with others over the Lyme disease message boards, was convinced that this was her daughter's diagnosis, even though nothing in her history and exam suggested it. Yet she wouldn't relent, and waved more and more printouts at me with information to support her diagnosis. I felt pressure to cave -- after all, she was just asking me to sign a piece of paper. But there was more at stake here: If the test came back positive, her daughter would need at least six months of antibiotics. This would require her to have an intravenous line surgically placed into her body (putting her at risk for serious infections) and regular home visits from a nurse to administer the medication.

For an hour, I held my ground, eventually agreeing to look into the matter further before making a final decision. It didn't take long to learn that the test she had championed basically lowers the bar for what constitutes a diagnosis of Lyme disease, so that essentially everybody who takes it has it. Yet when I explained my concerns to her, she wouldn't have it. "There's no such thing as a false positive Lyme test," she insisted. Doctor or not, anybody who has taken a basic statistics class can tell you that it's impossible for a test to be 100 percent accurate. Before I could respond, she got angry and accused me of obstructing her child's path to health. Needless to say, we parted ways.

Experiences like that have taught me that it's still more about people than the Internet. If you are an e-patient and you see Dr. Scott Haig, you're going be upset because he called you a brainsucker instead of addressing your needs. On the other hand, if you're an e-patient like the mother of that teen, you're going to be upset because you expected your doctor to take your order like a waiter at a fancy restaurant. What patients need more of is, in Gilles Frydman's words, "respectful discourse" with their doctors. What doctors need more of is a patient's acceptance that, in Groopman and Hartzband's words, "information and knowledge do not equal wisdom."

With that in mind, we need to help the masses surf the Web wisely. The first lesson is: Don't panic. This is, perhaps, the hardest lesson to learn; countless worriers have Googled themselves into a lather over misunderstandings. But every doctor has stories of a patient who came in expecting cancer and left with nothing more than, say, a prescription for antibiotics. A parent in my practice anxiously brought in her 3-year-old son with back pain. The night before, she looked online at the diagnostic possibilities. Many were listed, but, of course, it was the most frightening ones that stuck with her: tumor, infection, degenerative neurological disease. When I examined her son, there was nothing abnormal at all. In fact, it turns out he had been squeezing into his parents' bed to sleep with them over the past few nights, the back pain nothing more than the result of sleeping in an awkward position. When I spoke with the boy's mom, I wanted her to know that, like that list she had looked at on the Web, doctors always consider a wide range of possible diagnoses, but a good history and physical will quickly narrow things down, and provide some context to relieve uncertainty and anxiety. I'm betting the next time she goes online to learn about her child's health, she will keep that in mind and perhaps shoot me an e-mail before she fights traffic and the notorious parking lot at my medical center.

It sounds mundane, but teaching Web surfers to check references that back up health claims, and to see who is sponsoring the site, could really help them separate sound advice from, say, the Huffington Post. There are also a lot of games that dubious advocacy groups play on the Web to stay visible. Google "autism" and one of the highest-ranking pages is the Autism Research Institute, which is a conglomerate of anti-vaccine groups offering "biomedical" treatments for children with the disorder, all of which cost a lot of money and none of which have been proven to work. That means it also makes a lot of sense for people to search multiple sites, and ones that aren't hyperlinked to each other so they perpetuate a single person or group's agenda. One terrific place to get these kinds of pointers is from the National Library of Medicine, which offers an online tutorial about smart ways to use the Internet to find health information. As for my own advice on where to go, you can start by looking at sites that minimize conflicts of interest and have reputations for developing and maintaining high-quality, accurate and up-to-date health content. The CDC, NIH and other government agencies fit that bill, as do multispecialty medical groups like the Mayo Clinic, Kaiser Permanente (full disclosure: I'm a Kaiser doc) and the Cleveland Clinic.

Finally, believe me when I tell you that as much as the Internet has helped patients become better informed of their health, it's helping doctors do the same, and look smart as a result. A while back a colleague of mine ran over to my office asking me if I remembered McMurray's sign. This is a maneuver one performs on the knee to check how stable it is, and whether the anterior cruciate ligament is damaged. I did not, I told him. But as I was reaching for a textbook off my shelf I stopped, spun around to face my computer, pulled up YouTube and typed in McMurray's sign. Up popped several "how to" videos. We watched one of them, and off went my colleague to try it on his own patient, giving new meaning to the medical school adage "see one, do one, teach one."