Not all of it will be thrown out by the courts, but the most controversial provision has to be. Here's why 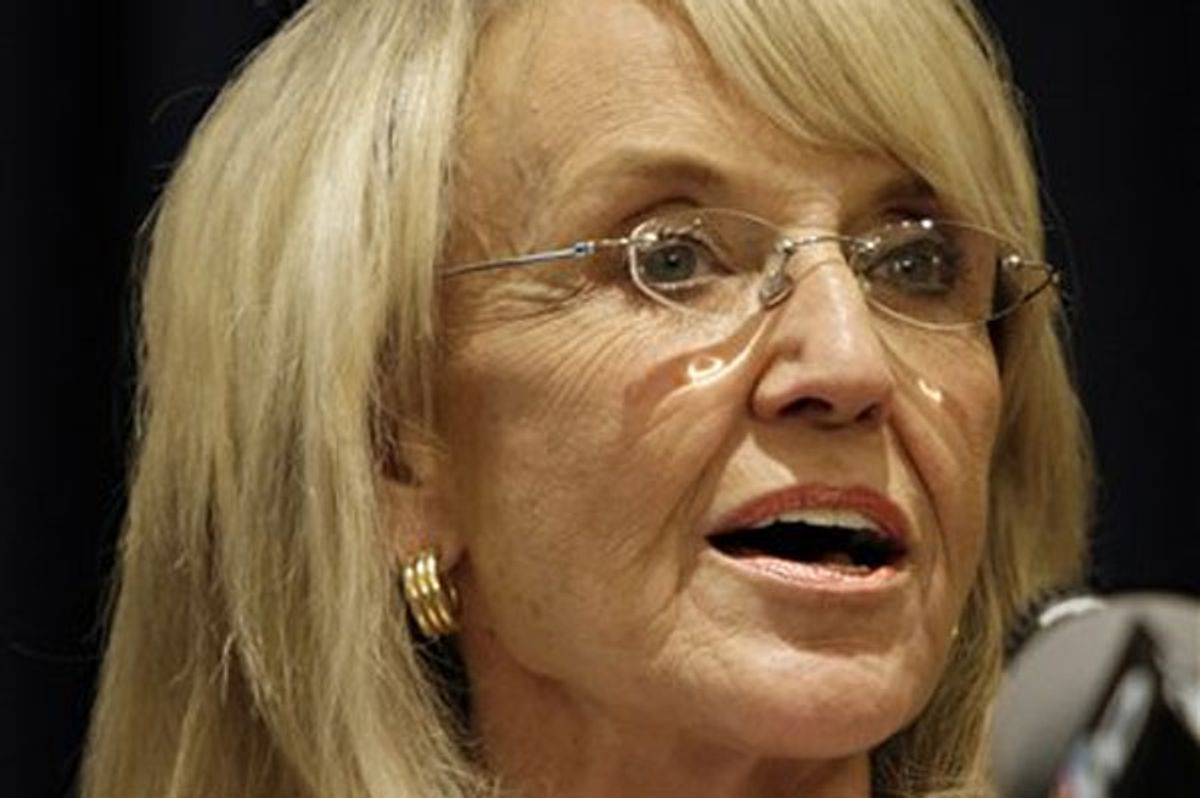 This April 14, 2010 photo shows Arizona Governor Jan Brewer at the Capitol in Phoenix. Brewer has called for more troops along the state's border with Mexico on Thursday, April 23, 2010, two days before a deadline for her to approve or strike down the nation's toughest legislation on illegal immigration.
--

Minutes after signing the nation's toughest illegal immigration law, Arizona Gov. Jan Brewer was asked about her confidence in its ability to withstand a legal challenge. Even the most complex legal wars begin with public relations battles, and the question provided the governor a good opportunity for a first strike -- a full-throated defense of the law's legality. She passed.

“Well, you know,” Brewer said, "it's probably going to survive, I think, i-i-in most areas."

The governor's hesitation was warranted. Although Brewer might be right that much of the law is legally unobjectionable, there is a high probability that its most controversial provision will be struck down before the law goes into effect.

The Support Our Law Enforcement and Safe Neighborhoods Act (known mainly as SB 1070) requires that police officers determine the immigration status of a person "where reasonable suspicion exists" that the person is in the country illegally. The officer must then verify the suspect's immigration status with the federal government.

As many have noted, the most obvious (and provocative) question raised by this provision is, "What do illegal immigrants look like?" They're probably Hispanic, but so are 30 percent of Arizona's residents. So unless the law authorizes the stopping and questioning of any person who looks darker than the average Caucasian, there needs to be some other criteria that set apart illegal aliens from lawful residents.

But so far, no one has come up with any. When asked what other factors an officer might use to single out an unlawful resident, Brewer replied, "We have to trust our law enforcement."

That's not a constitutionally acceptable answer. For one thing, the Constitution's equal protection clause forbids the government from differentiating between anyone in the United States -- including illegal aliens -- on the basis of race. The new law, on its face, doesn't make racial distinctions, but its supporters haven't articulated any other grounds for suspecting that someone is an unlawful resident. It is, therefore, vulnerable to the argument that it essentially criminalizes walking while Hispanic.

The failure to adequately define "reasonable suspicion" also subjects the law to what might be called the "Papers, please" line of attack. Under the Fourth Amendment, police officers can't simply stop people on the street and force them to answer questions. Instead, policemen can generally detain people only if there are specific and objective facts that suggest criminal activity is afoot.

For many crimes -- say, drug-dealing -- there may well be reliable and concrete factors that would alert an officer to possible illegality. But unlawful presence in the United States is a crime of status. Short of seeing someone sneak over the border, what specific, objective facts would suggest to an officer that a person is in the country unlawfully?

The law seems to require that officers demand documentation from suspected aliens based on mere hunches -- a clear violation of the Constitution.

There are other problems. Even assuming that an officer reasonably suspects that a person is in the country illegally, what happens next? The law doesn't specify. If a person -- for example, a park jogger -- lacks what the officer regards as proper identification, is the officer supposed to arrest the person? Or detain him or her while checking the person's immigration status with the federal government? Do Arizonans need to worry about being held in the back of a squad car because they forgot to bring their license with them on a quick trip to the grocery store?

The uncertainty surrounding these questions brings SB 1070 directly into the cross hairs of what's called the "void for vagueness" doctrine, a legal principle that requires a certain specificity in criminal statutes. The Arizona law, in failing to provide clear guidelines either to citizens or officers, creates a risk that policemen will, in the words of the Supreme Court, conduct "standardless sweep[s]," bound only by "their personal predilections."

None of these legal arguments is bulletproof, and each one in isolation might not be enough to invalidate the "reasonable suspicion" provision. But constitutional claims often have a synergistic effect, and courts typically do not look kindly on laws that, like SB 1070, cut close to an array of constitutional freedoms. A law that can be, unfairly or not, characterized as sanctioning the widespread questioning and detention of a particular race of people based on vague suspicions is probably not long for the books.

So what happens if part of the Arizona law is invalidated? Not a lot, necessarily. The "reasonable suspicion" section is a small part of SB 1070, the majority of which consists of fairly specific provisions designed to prevent the harboring and hiring of illegal aliens. The only real argument for tossing the entire law is one based on federalism: that the Arizona law interferes with the federal scheme for regulating immigration. But that's an argument that might not gain traction with moderate judges, suggesting as it does that any state efforts to deal with the consequences of illegal immigration are improper.

The most likely outcome of the legal challenges to SB 1070 may be that the bill survives, shorn of its most offensive parts. This is obviously a good result for civil libertarians, but it's also good news for their frequent adversary, police officers. In requiring officers to check immigration status but providing them no clear guidelines on when or how to do so, SB 1070 places policemen on the razor's edge of violating Arizona law on the one hand and infringing on constitutional rights on the other. The "reasonable suspicion" provision is probably one that Arizona's police officers are perfectly happy to do without.

The losers in a successful legal challenge are obvious. If parts of the Arizona law are invalidated, Brewer and the state legislators who voted in favor of the bill will likely have made not only a legal misjudgment, but a political one. As many commentators have observed, the future electoral success of the Republican Party depends in part on its ability to capture a significant percentage of the country's growing Hispanic population. So the delicate dance for Republicans is to satisfy the "no amnesty" wing of their base without gratuitously offending Hispanics -- a mission that does not seem of great concern to Brewer, who faces a Republican primary in August. She might get across the finish line this summer and again in the fall, but in signing a partially unconstitutional law that seems to regard Hispanics as presumptively criminal, it's unlikely that she did her party any long-term favors.