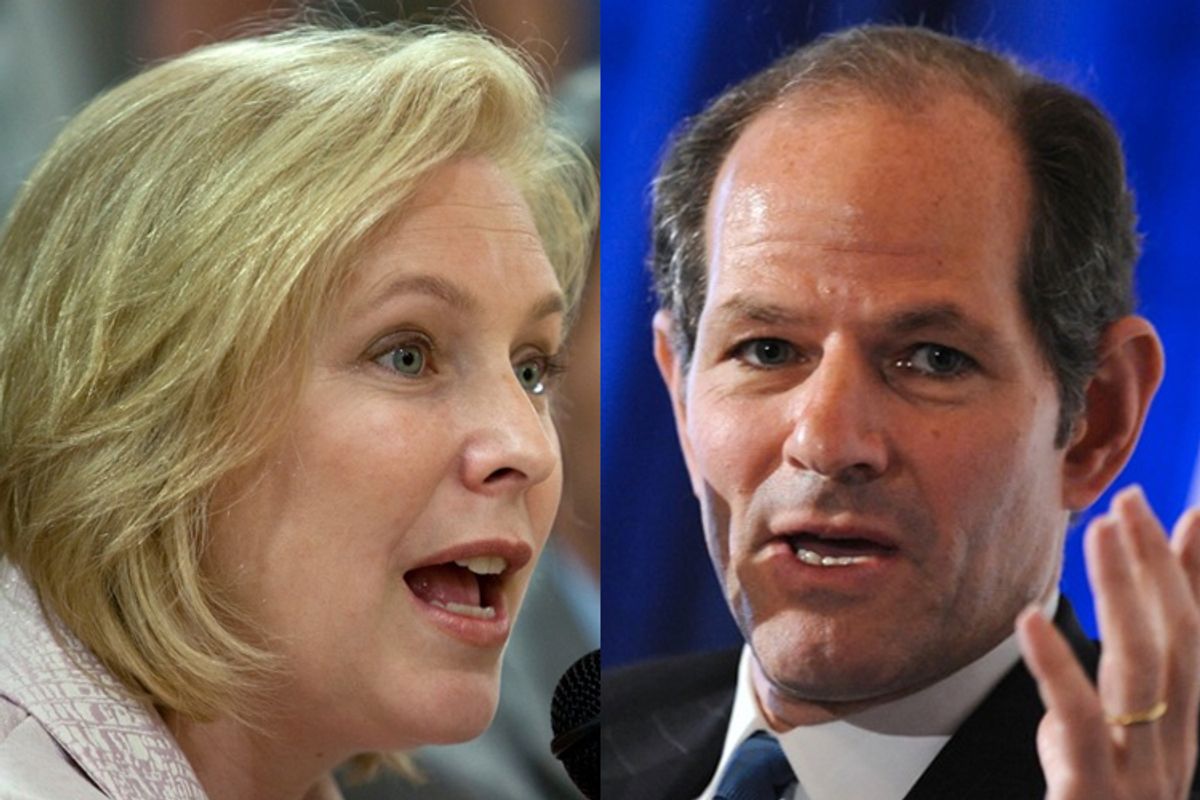 It’s clear that Eliot Spitzer has made a political comeback his priority, moving aggressively and deliberately to restore his public profile, and pointedly refusing to rule out another run for office.

Now the question is: Will he cash in his surprisingly positive reception by running this year for the only available office that fits his stature, the U.S. Senate -- one he would probably win? Or, will he heed "sensible" advice and let some more time pass before testing the electoral waters, only to find every door blocked?

Spitzer has certainly picked a bold and novel path back to the limelight, cooperating with a documentary film by director Alex Gibney, linked to Peter Elkind’s unsparing book about his fall from grace, "Rough Justice," and launching an out-of-nowhere attack this past weekend on Andrew Cuomo, his Democratic successor as state attorney general and the all-but-certain winner of this year’s governor’s race.

The Spitzer for Senate idea was raised earlier this year. A small boomlet took brief shape in February, when a New York Daily News piece by Mark Greenbaum laid out a clear-cut rationale for such a race: Kirsten Gillibrand, the appointed senator, is uncommonly weak; a garish string of political sex scandals has made Spitzer’s moral lapse seem almost tame; and most crucially, Spitzer’s record of taking on Wall Street matches the current moment perfectly.

New Yorkers expect their senators to be heavyweights, like Bobby Kennedy, Jacob Javits, Pat Moynihan, Hillary Clinton and Chuck Schumer. Gillibrand clearly isn’t that, at least in the voters’ eyes. A one-term, moderate upstate congresswoman before Gov. David Paterson picked her to replace Clinton, she’s had massive assistance from her mentor Schumer, from many of Clinton’s ex-staffers, and from the Obama White House, which strong-armed several eager top-tier Democratic challengers out of her way.

Despite these advantages, Gillibrand’s brief performance in office has been mocked and criticized, and her ratings are stalled. She is winning only by default. A bizarre near-challenge from former Tennessee congressman (and occasional New Yorker) Harold Ford and an even more far-fetched trial balloon from billionaire Daily News publisher Mort Zuckerman only served to showcase her vulnerability.

Spitzer is probably well-suited to the Senate, where his crusading zeal, knowledge of finance, and legal background might play much better than in the Albany statehouse. He could have a long career as a committee chair and shaper of legislation, and achieve a personal rehabilitation to rival Ted Kennedy’s.

But apart from his strengths in a September primary against Gillibrand, it’s Spitzer’s utter lack of other options in the foreseeable future that should tip him toward what would be a spellbinding return to the campaign trail.

Spitzer is rumored to be considering a race for state comptroller. Though plausible -- the office has been tainted by scandal, and Spitzer could handle the job in his sleep -- what would be the point of running for that thankless job? It’s never been much of a steppingstone, and anyway, it’s hard to see Spitzer climbing the ladder back to governor. Despite some observers’ skepticism, Andrew Cuomo could easily turn out to be a successful governor who might serve three terms, as did his father and George Pataki. (And then there's Nelson Rockefeller, who won four times.) And sex scandal aside, virtually no one shares Spitzer’s view that his truncated administration was anything but a disaster.

And another chance at a U.S. Senate seat from New York won't come Spitzer's way after this year. Schumer is a safe bet for reelection this fall, and can be expected to run for at least one more term after that, which takes us to 2022. And at age 43, it's safe to say that Gillibrand could serve for decades if she wins this year (although she would have to run for a full term in 2012; this year's race is just for the last two years of the term Clinton won in 2006).

Spitzer’s legal transgressions also preclude a return to his old job of attorney general. Sure, he could someday pick a race out of left field -- New York mayor in 2013, or perhaps some open House seat. But would those uncertain prospects be better than becoming a U.S. senator in 2010, two-and-a-half years after being declared politically dead? (Since Gillibrand is a fill-in appointee, anyone who beat her would take office upon election, jumping ahead of next year’s freshman Senate class in seniority.)

If he were to run, Spitzer would make some fresh enemies in his party, including the White House. But he is a bold, aggressive guy. His willingness to criticize a pit bull and rising star like Cuomo shows he has few qualms about offending New York’s limping Democratic establishment. And though few remember that Gillibrand’s protector Schumer made serious noises about running against Spitzer for governor in 2006, and later encouraged Nassau County executive Tom Suozzi to enter the race, Spitzer certainly does, and would relish the chance for payback.

To be sure, a sudden entry into the Senate race would be risky for Spitzer. Yes, it’s late. Yes, Gillibrand is a dynamite fundraiser. (Her $5 million cash-on-hand has scared off others, but is a fraction of what a competitive statewide race would cost -- and Spitzer can self-finance. And with universal name ID, he could get by with less money.) Yes, fresh details about his penchant for paid sex would be brought up, though he may feel that the documentary interview and book have inoculated him.

But next to freak shows like Eric Massa, Mark Sanford and John Ensign -- not to mention John Edwards, who will soon have to explain under oath why he chose to record a sex tape with his pregnant mistress at the height of a presidential campaign he expected to win -- Spitzer’s a virtual poster child for how to regain dignity after catastrophic humiliation. (It helps that he managed to save his marriage -- and that senators aren’t expected to be moral paragons.)

And looking at his dim options in the coming years, one could argue he is taking a much bigger risk if he doesn't challenge Gillibrand. His brand equity as the "sheriff of Wall Street" is at peak value now, not down the road when both the issue and memory of his attorney general years will have faded.

Crazy? Maybe. But if Spitzer hopes to ever return to office, it would be even crazier to pass up a race that could essentially make him a senator for life before the year is out, a golden opportunity he’ll never have again.

Peter Feld is a writer and web content strategist who has worked as a Democratic political consultant and pollster, and was a market research director at Conde Nast Publications. He has written about politics for the New York Post, Gawker, Radar, Conde Nast Portfolio, Ad Age, Guest of a Guest, and Cookie, and taught polling in NYU's graduate program in Political Campaign Management.