The ex-lovers and former collaborators are at war again. But you'll never guess who's being classy about it 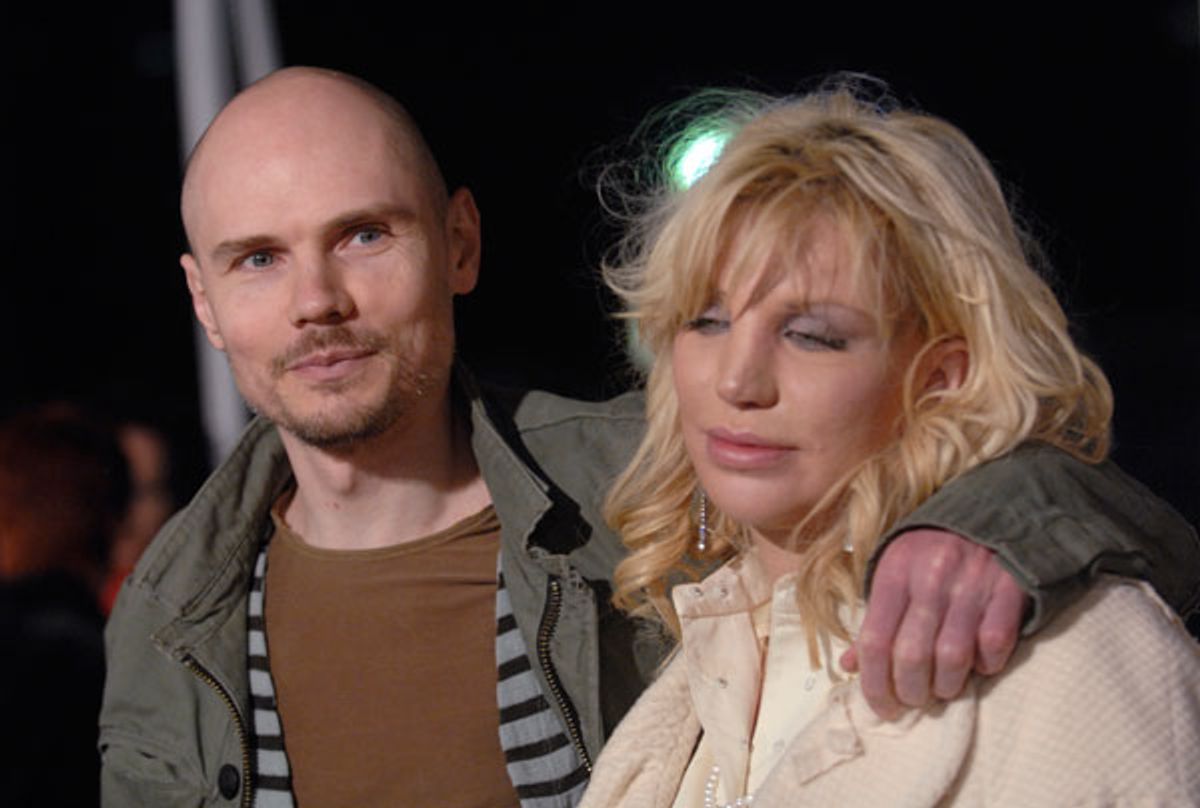 Today's big-name Twitter battle is a celebrity death match straight out of "I Love the '90s." In one corner, we have Courtney Love, who has recently made headlines for losing custody of her daughter, (maybe) temporarily changing her name, and putting out a surprisingly fantastic new album. In the other, Smashing Pumpkins main man Billy Corgan, who's been connected romantically to the likes of Jessica Simpson and Tila Tequila, is in the process of releasing his latest 11-EP magnum opus and has some frighteningly nutty thoughts about the origins of swine flu. Love and Corgan have been friends, lovers and collaborators on and off for about 20 years -- and this is far from the first time they've fought in public. Considering the history and personalities involved, this Twitter matchup has all the makings of a crazy-fest that could put Scott Baio, John Mayer and Ice-T to shame.

Corgan vs. Love round 859 started Monday, when the Great Pumpkin (whose Twitter contributions usually have more to do with praising God and capitalizing words like "star" and "sky," Emily Dickinson-style) tweeted a six-point list of his "thoughts" about the Hole singer. Making reference to her recent custody troubles, Corgan wrote, "the world is aware of your lack of responsibility, as seen in the gov't taking away your parental right ... Only u could abandon such a beautiful, incredible child who is smarter than u, cooler than u, and better than u. Oops, did I say too much?" He also suggested that he deserved more credit than he was given for co-writing songs on Hole's new album, "Nobody's Daughter," twisting the knife with a particularly cruel jab: "maybe you should go someone [sic] nice+live off your husband's money, u know the money he made for writing all those great songs." In conclusion, Corgan opined (in words that wouldn't be out of place in a Smashing Pumpkins song), "so have your moment, burn up in the sun that laughs at u as equally as it appears to celebrate u+sleep knowing u have no honor."

Corgan, it seems, was responding not only to Love's chat with Howard Stern Monday (in which she may have made some disparaging comments about Corgan's sexual prowess) but also to a public apology she offered him last month on Facebook. (Sample sentence: "We have again created beauty from the agony between us, all the buried and unburied anguish, all that is true, that is gold, that is meant to be is within this endless and somehow eternal cycle of Billy & Courtney.") So, shouldn't Courtney -- who, God bless her, has never been known for her Twitter restraint -- be responding with some kind of angry/sad/insane meltdown about now?

As it turns out, Ms. Love may really be making a sincere effort to get a handle on the "Courtney monster" Amy Benfer describes in her review of "Nobody's Daughter." She isn't ignoring Corgan's comments or keeping mum about a supposed affair with former Bush frontman/current Gwen Stefani husband Gavin Rossdale (and I, for one, am glad she hasn't changed that much), but she is certainly doing some self-policing. On Twitter Tuesday afternoon, Love fired off a few quips wondering why Corgan was so obsessed with her daughter, Frances Bean Cobain, and agreeing that she really is an awesome kid. Then there was the following laugh-out-loud funny tweet: "@Billy you remind me of Bette Davis in 'Whatever Happened to Baby Jane.'" Minutes after her initial messages, she started retweeting fans' suggestions that she ignore Billy or that they take their argument out of the public eye. (Let it never be said that Love doesn't interact with or appreciate her fans.) Soon after, she reeled herself in and addressed her followers: "thank you so much for the support and my apologies for even responding a little bit i deleted most of it but the kid? my kid? really? creepy."

I don't want to debate Love's parenting ability or who actually wrote most of "Nobody's Daughter." Perhaps Corgan really does have a reasonable complaint (although I have to wonder: If he can write a great album for Hole, why haven't we seen any compelling Smashing Pumpkins material since the mid-'90s?). But for now, I just want to celebrate Love's newfound self-control and retain my hope -- for her and her fans alike -- that it lasts long enough for her to give some career-defining performances and promote the hell out of the hard-won success that is "Nobody's Daughter."