Courtney Love has the last laugh

The tabloid punch line and master of self-sabotage has done something totally expected: She put out a great album 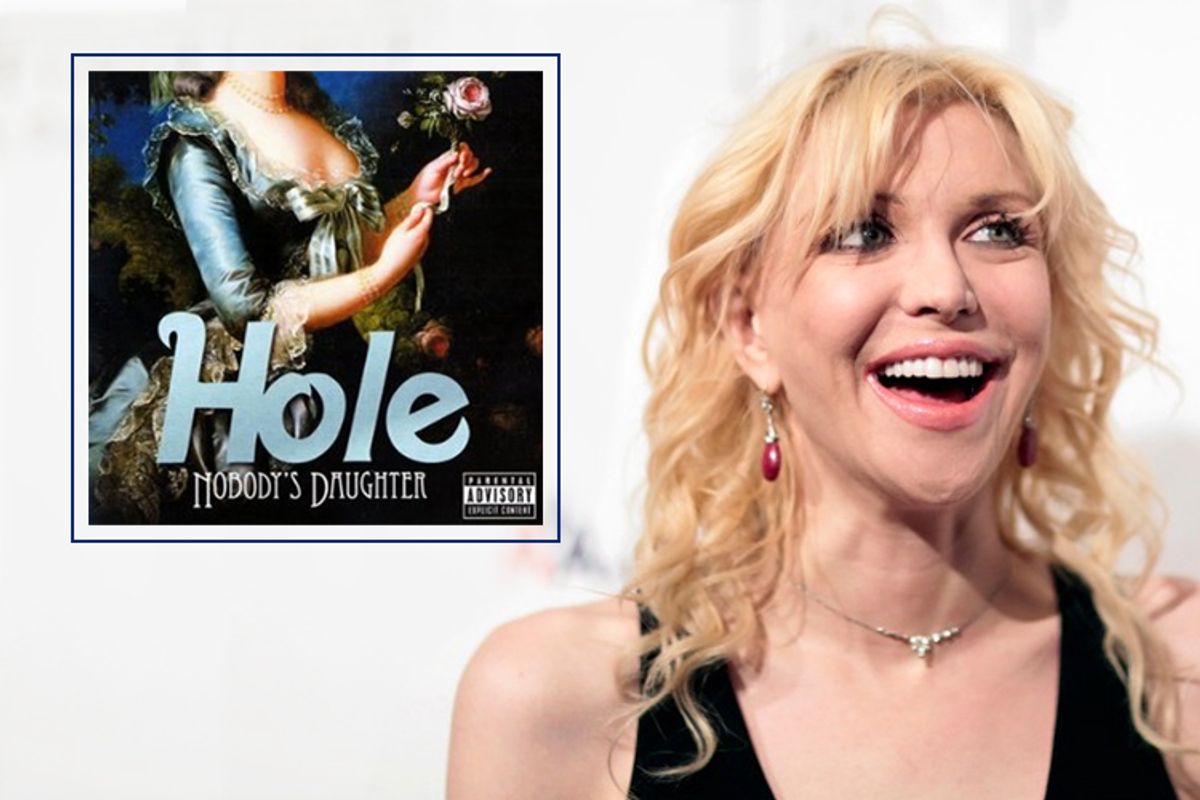 On "Never Go Hungry Again," the final and one of the best tracks on her new record "Nobody's Daughter," Courtney Love asks us to picture her on some long journey back from some unnamed dark place. "My dress is torn," she tells us, "and I've got no jewels," and later, "my wig is crooked/and I've got no shoes." There is, she says, "No one left to offend." But it is time for her to "stand up and be a man." It's as perfect an image as any to evoke the 45-year-old rocker taking her last stand at a comeback: She's Scarlett O'Hara, the defiant widow (a familiar trope; both this song and Hole's second album, "Live Through This" take their title from O'Hara's speech at the end of "Gone With the Wind"), claiming her place among the grizzled, whiskey-soaked gunslingers of rock. She's beautiful and ballsy and knows she's faintly ridiculous, but she's not afraid to let you know she can take you the fuck out in back.

"Nobody's Daughter" is the fifth album from Courtney Love (and the fourth recorded under the name Hole, though she is the only remaining original member in its current incarnation), and is overdue by about three years. But even her hardcore fans anticipated little more than yet another chance for her to demonstrate just how little she has in common with the woman who was once, as she recently joked in an interview, credited with "dragging every single female English major through college. And some of the males too." Fans and critics were underwhelmed by her last record, "America's Sweetheart," and its release in 2004 was handily overshadowed by a month of behavior so perverse -- flashing Letterman, offering her breasts to a complete stranger in Wendy's -- it seemed she was hell-bent on self-sabotage. (According to the New York Times, even she now refers to it as "le disastre" and "that piece of trash I made in the South of France.") The many delays did little to boost the reputation of "Nobody's Daughter," and when news came this past February that it would finally be released, bloggers felt free to trash it without ever having heard the thing, rubbing their hands with anticipatory glee for the fabulous wreckage sure to accompany the upcoming press junkets and tours.

And yet, thus far, that's not quite what has happened. Early last year, after listening to leaked tapes, Fox News called "Nobody's Daughter" a potential "masterpiece" (comparing it to Marianne Faithful, Patti Smith and the Eagles in one breathless sentence). Her first single, "Skinny Little Bitch," is getting decent airplay and her shows are selling out across the country. The NME gave her a cover story (in which she seemed to renounce her last name, only to reclaim it over Twitter within a day of the story going to press) and the New York Times treated her to a profile in which she comes off as articulate, polite and nearly demure.

"It's been twelve years of not being respected at all, and then, all of the sudden, to have it happen again is a little creepy," she told the Toronto Sun last week (in a rambling, highly amusing interview that's worth reading in its entirety). "It's like being a fat girl and then losing a ton of weight. And what can you say about that? When you were fat, you weren't attractive. Now you're skinny and you are. You can't be mad about it. But you can scratch your head."

Though Love's weight has oscillated as wildly as the rest of her life, the factors that made her first unattractive to some, then downright reviled by others included drugs, baroque financial disasters, losing custody of her daughter, Frances Bean Cobain, and making a crap record in 2004. And her professional comeback, if it happens, requires two very major shifts: First, she has to make a record that other people actually want to listen to, including some combination of the fans who can still sing all the words to "Doll Parts," and may consider second-rate everything she's recorded since 1994, and those who spent 1994 in a bouncey chair, and have no idea what she did outside of tabloids and Twitter. And second, she has to hold her shit together well enough to avoid screwing it all up for herself. This is a woman who has proven so adept at being her own worst enemy that she has begun to excoriate herself in interviews, referring to "CL" or "the Courtney Love monster" in the third person, as if her stage persona were some sort of malignant appendage she has been shackled to against her will.

The Courtney Love monster seems like she'd be a disaster to have hanging around the house: she'd borrow your best dresses, steal your liquor, then pass out in your closet. But exorcising the Courtney monster comes with dangers of its own. As Judy Berman pointed out in Broadsheet last week, part of Love's appeal comes from her very American striving quest for self-improvement, and her frequent failures to transcend her own messy nature. "Like so many of us," Berman writes, "no matter how hard she tries to invent and inhabit new and superior identities, she always remains the same, old Courtney Love, with all the weaknesses and excesses that implies." And while she's managed to alienate plenty of people solely on the basis of being a hot mess, she has just as frequently turned people off by seeming to be overly bald in her ambitions: the teenager who put "make friends with Michael Stipe" on a to-do list grew up into a musician who alienated some fans by dressing too fancy, seeming to care too much about Hollywood bullshit, or creating radio-friendly singles.

Love began writing this record in rehab, so it will surprise exactly no one that the overarching theme of the record is, to quote one of the album's singles, "How Dirty Girls Get Clean." The Courtney Love monster is frequently taken out to the wood shed by her own creator; she writes about her own bizarre swings of fortune ("I've been cheated/covered in diamonds and covered in filth"); her days as an object of ridicule ("I never meant to be some kind of comic relief") and even her own self-hatred in "Skinny Little Bitch," a song directed at her scrawny and drug-addled 100-pound self.

Many of the songs, including "Nobody's Daughter," and "Dirty Girls," have several versions lurking around the Internet; musically speaking, the ones that made the album are the "cleaner" (read: smoother, more produced) versions, while the "dirtier" versions were left to haunt illegal file shares. Musically, this places the record closer to 1998's "Celebrity Skin," but the "cleaned-up" Courtney (the one covered in diamonds as opposed to filth), has always seemed subversive in her own way. Just as there was a certain "fuck you" to seeing the one-time punk princess in her Versace phase, it somehow seemed even dirtier to hear her sing lines like "Oh, Cinderella, they aren't sluts like you," accompanied by sunny pop hooks.

"Nobody's Daughter" has several similar studies in contrast: "Pacific Coast Highway," allegedly written the day she returned from rehab, has the same jangly, melodic guitars as "Malibu," off "Celebrity Skin," but tells of driving along a highway "with your gun in my hand." The chorus cleverly reverses the child's rhyme about God ("he's got the whole world in his hands") to "your whole world is in my hands," and is one of many on the album that seems to address her late husband. Although she has become understandably impatient in playing the lifelong widow ("I am not his official spokesperson on Earth," she snapped to the NME earlier this month, speaking about Cobain), this record serves as an uneasy exorcism of sorts. There's not a lot of pretense going on: in death, he's the angel; in life, she's the devil, left "stuttering around and staggering through," with her messy habits, her drug problem, their child, while becoming old and un-fabulous. One might wish for a little more original imagery than the many "angels" and "devils" and "dead stars" that populate this record, but one might also point out that, in her life, these images are much closer to literal plain speech than metaphor.

Ultimately, this record has a raw, unadorned quality of a woman with an awful lot behind her. This often comes out literally in her voice, in which the damage is physically inscribed, giving the simplest lines layers of meaning. "Look what I can do," she says, in "For Once in Your Life," delivering a sense of menace and regret, as if she's Medusa surveying some awesome scene of carnage. When later in that same song, she pleads, "please stick around and I'll build you a world," one is reminded that she did lose a world once, and is still struggling to rebuild.