From the OCD, the Tribes and the Hostiles, how to spot the wildlife in the miles and miles of aisles 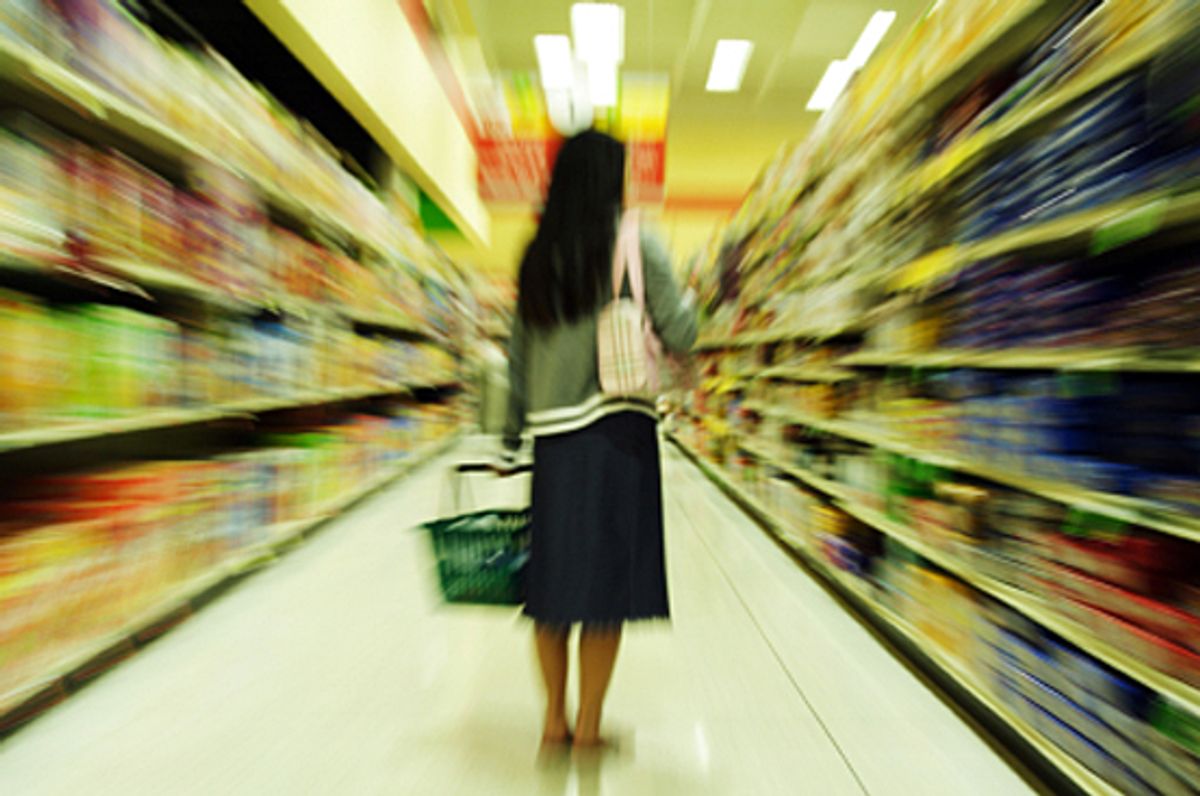 A woman shopping in a grocery store
--

Every Saturday morning, even if Mercury is retrograde, we go to the grocery store. In this part of the world there is no such thing as Whole Foods, and the nearest Trader Joe's is an hour away. We shop at Meijer's Thrifty Acres, a Michigan-based operation that sells everything from food to auto parts. There is no artisanal cheese, lobster ravioli, free-range chicken, Tofurkey or cheap house reds; this is a Midwestern store with Midwestern values. (Like no Tofurkey). It has been a fixture throughout my life (aside from a brief relationship with Star Markets in Boston), and is at once sprawling, overwhelming and as familiar as home.

In the aisles of Meijer's, I have seen the gamut of human types and behaviors; it is a fine microcosm of my community and of humanity as a whole (or, sometimes, as a "hole"). Everyone is trying to get something accomplished; some have a rigid plan, and others wander in a cloud of uncertainty. Some shop alone, others with an entourage of friends and/or family members. There are folks who beam their rays of love as they push their carts through the dog food aisle, and folks whose hostility and malevolence are palpable. As sociological research goes, a Saturday morning at Meijer's is a bonanza.

Because we live near a large university, and many students live off campus and own (nicer) cars (than we have), shopping at or after 12:00 means that they will be found around every corner. At the beginning of the school year they come with their parents, collecting unwieldy piles of mops, storage containers and institution-size packages of ramen and Frosted Flakes. Mothers advocate buying vegetables and Clorox spray; fathers look mutinous and flee to the hardware section. The students are clearly counting the minutes until their parents have emptied their wallets and their SUVs and returned to the suburban comforts of home. Later in the year, clusters of roommates may be found in the soup aisle, blocking all legitimate traffic as they hold earnest debates about whether they really prefer chicken noodle soup or tomato. Sometimes, on the day of a home football game, a rangy herd of young men in sweats and backwards hats will lumber in to buy vodka and Cheetos, leaving behind them a trail of f-bombs guaranteed to shock all grandmas, mothers and other sensitive humans.

There are also parents with numbers of small children best suited to a TLC series, pushing low plastic carts with built-in DVD players projecting a continuous and jangling loop of animated chaos. Often, two children share the seat inside the cart, one trailing a foot in such a way as to exert maximum drag, and both whining about who put their sucker on the other's snow pants. An infant will be perched in a car seat on the cart's handle, and at least one other child will run alongside the cart nagging for eye-level cereals and dropping behind periodically so that the frantic parent has to choose between abandoning the other three to make a reconnaissance mission, or standing by the cart and yelling, "David? David?!" until the prodigal son returns with the sample of cholesterol-free turkey sausage he has cadged. I have, at various times, retrieved projectile bottles, pacifiers and baby socks from the floor and returned them to grateful and demoralized mothers and fathers; I only wish we could also send them on a spa vacation with their offspring left in the care of Supernanny.

The aforementioned Parent of a Thousand Toddlers is a varietal of the Tribe, a phenomenon in which it appears that not only every family member, but everyone living within a mile of one's home, is brought to the grocery store. These bands often include people my age, their parents, their children, their grandchildren and mysterious duplicates at several age levels who could be siblings, cousins, parole officers or hitchhikers. These tribes take up most of the space in an aisle, and there is usually a large group clustered around the cart as if it were a wet bar, with satellites heading off to grab the actual groceries. Often, the majority of the group is not only un-animated, but appears possibly to have become zombies, while the remaining human in the group frantically gathers food before her own flesh is consumed. I have no idea why people shop this way; it is a rule in my own (small) family that no one talks to me while I am shopping, because I am Following My List and Counting the Total at all times. When I see someone I know (because there is no socially acceptable way to clue them in on the "don't talk to me" rule) I surreptitiously write down my current total so that I will be able to resume after they have moved on.

My least favorite variety of shopper is the Hostile. For whatever reason, maybe a bad day or a bad life, these people view all other shoppers as potential combatants, and are not only willing but anxious to take visible umbrage. These are the people fluent in what my father calls "dragon breath," the disgusted exhalation meant to be heard and understood by those who have gotten on the breather's Last Nerve. Transgressions known to offend the Hostile include, but are not limited to, having a crying baby, being slow in the U-checkout, and accidental cart bumping. I have personally had the misfortune of tapping my cart accidentally against the cart of a Hostile while rounding a corner. After I said "excuse me" in my most winning way, I received the roll of an eye, the breath of dragons, and the dramatic departure featuring muttering about how "some people just think they rule the world" in a voice intended to be audible. Clearly there is some kind of pathology at work, but it just seems so much easier to smile and say "no worries" than to engage in major and protracted huffery. People do, after all, forgive those who cheat on them and injure them in accidents; what's the big deal about miscalculating turning radius at the intersection of International Foods and Cereal?

As long as I live here, which will probably be as long as I live, I will be at Meijer's every Saturday, following my OCD route with my OCD list. I will tell the undergraduates the difference between salted and unsalted butter when they ask, Rob will reach things from high shelves for me and my fellow dwarfs and midgets, and we will both smile sympathetically at frazzled young parents. Even if I have to listen to the Chipmunks singing "The Christmas Song," followed by "Jingle Bell Rock," I will strive to be a benevolent force in the aisles of Meijer's. As for you, Hostiles of the world: All I am saying, is give peace a chance.