An investment bank public relations disaster: Wall Street's best and brightest get hung out to dry in Washington 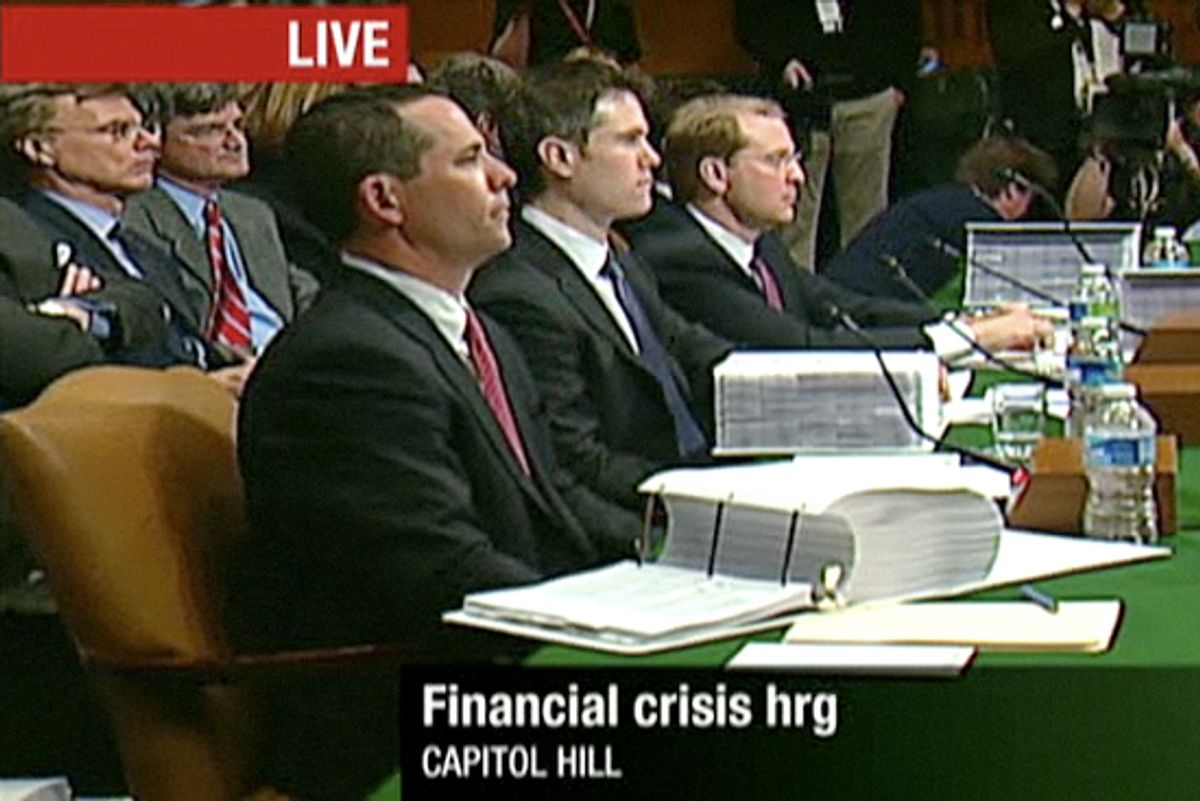 Fans and detractors of Goldman Sachs agree on at least one point: The investment bank employs the smartest traders on Wall Street. The best risk managers, the most deadly sharks, the crème de la crème. But at the start of a full day of congressional hearings featuring Goldman Sachs executives, past and present, Sen. Carl Levin, chairman of the Senate's Permanent Subcommittee on Investigations, made Daniel Sparks, Goldman's former head of mortgage trading, look pretty dumb.

The first panel featured four Goldman executives at the heart of Goldman's structured finance division, including Fabrice Tourre, the trader who is the focus of the SEC's allegations of securities fraud against the investment bank. It would not be an exaggeration to describe these four men as the belly of the structured finance beast -- the creators and marketers of the complex financial instruments whose collapse was at the heart of the financial crisis.

They sure looked smart. And there is little doubt: They were clearly better at their jobs than their counterparts at other Wall Street investment banks. They recognized the moment when the mortgage market started to turn sour, and they deftly shifted Goldman's own investment strategy to shield the bank from the losses that crushed their competitors. But at the same time they continued to push structured finance deals built from mortgage-backed securities to clients who still believed that the housing market had an upside.

Levin's first question, directed at Sparks, concerned Goldman's efforts to sell to clients a security that referenced mortgage loans originated by New Century Finance -- one of the most notoriously reckless subprime lenders. The loans were terrible, and Goldman knew that they were terrible -- Goldman was hedging its own risk by betting that the security would decline in value.

One of Goldman's clients asked via e-mail, "How do you get comfortable with the collateral behind those securities?" Meaning, basically: Those loans are crap, how in the world can you possibly be comfortable pushing this deal?

And Daniel Sparks simply would not answer the question. He tried delaying tactics. He tried to pretend that he did not understand the question. He tried to wiggle by citing Goldman's favorite defense: that any investor Goldman made a deal for was "sophisticated" and fully understood what it was getting into. But a relentless Levin kept pressing the point, which boiled down to something very simple: Did Goldman have a responsibility to its client to indicate its own evaluation of the securities it was pushing?

Susan Collins, the ranking Republican present on the committee, followed up with an even more direct question: "Do you have a responsibility to act in the best interest of your client?" Seems like a simple enough question, but Sparks could not answer it either, saying only, after much pressure: "I believe we have a duty to serve our clients."

Goldman's defenders, if you can find them, will say that Goldman's responsibility was just to broker deals, to be a "market maker." If a sophisticated investor wanted to get on the side of a deal that Goldman was betting against, that's OK. Everyone's a big boy here. "Serving" the client, in this respect, means making the deal that the client wanted to happen.

That may well be a legally defensible position.But the reality is that most Americans do not understand the definition of "serving your client" to include "pushing your client to invest in a 'shitty deal'" (as one Goldman exec characterized a deal zeroed in on by Levin) on their clients. And that's what Goldman was doing.

Wall Street was, in fact, a factory for turning shitty deals into profit. Goldman was the best in the business, but it was a very, very bad business.