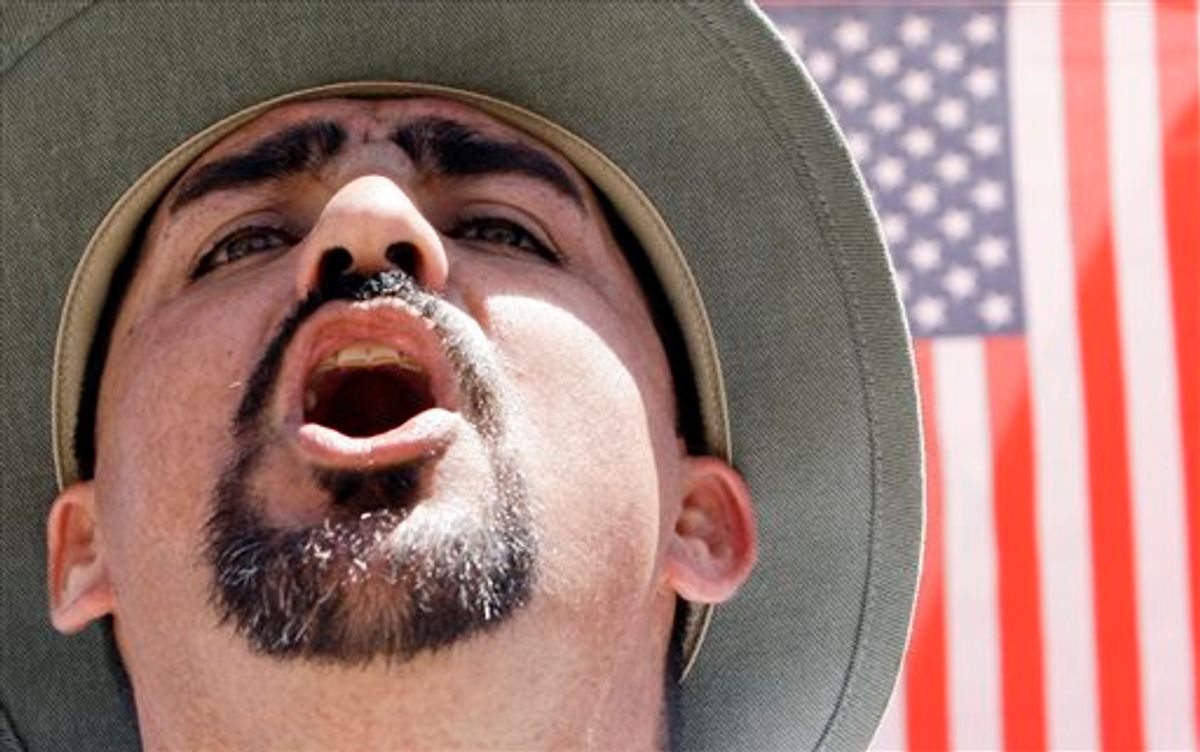 A protester shouts as he joins thousands attending an immigration rally in Arizona on April, 25, 2010. (AP Photo/Ross D. Franklin)
--

So the Obama administration and Senate Democrats have apparently decided that, once financial reform is finished, there's only enough time for one more major legislative push before the midterm elections shut down Congress. Both immigration reform and an energy-and-climate bill have been jostling for the nod, and it now looks like Democratic leaders are going with immigration.

There are some good reasons to be dispirited about this. For one thing, while bringing millions of undocumented people out of the shadows is important, climate change is by far the most crucial single issue of the era, and we're just plain running out of time to do something about it. This session of Congress will probably have been the most opportune moment to come around in a while to act. Hell, a climate bill has already passed the House, and there's actually a Republican senator, South Carolina's Lindsey Graham, who's ostensibly eager to move on a compromise.

But the Democrats are punting. No wonder Graham got mad, and has pulled his support from the proposal (and from the compromise immigration bill, of which he's also an author). As far as the South Carolina Republican is concerned, he went out on a limb on a tough issue, and the Democrats abandoned him there to go rack up some political points by pushing an immigration bill that can't pass.

On the other hand, as Ezra Klein points out at the Washington Post, a climate bill probably can't pass either. Graham might not have been willing in the end to be the Republican who gave the Democrats their bipartisan stamp of approval. (Remember how well that compromise on healthcare worked out with Sen. Chuck Grassley, R-Iowa, and Sen. Olympia Snowe, R-Me.?) If climate change stayed on the agenda and Graham stuck with it, he probably would've become a focus of right-wing rage like we can scarcely imagine. Which means that he probably wouldn't have stuck with it. Most likely, the bill only seemed viable because nobody was paying attention yet, so the South Carolina conservative base hadn't yet heated up to white-hot fury. (Besides, Democrats might have lost a few votes from anxious coal-state senators.)

Nonetheless, Graham's complaint is pretty much spot-on in its basic premise: Ditching climate legislation in favor of immigration reform is straight-up political calculation. But who says that's so bad? For showing some political savvy, at least, the Democrats deserve some applause. With the election approaching and vulnerable incumbents -- not least Senate Majority Leader Harry Reid, of 25 percent-Latino Nevada -- getting nervous, putting immigration at the center of the national agenda seems to make a certain strategic sense. It's an issue that divides Republicans more than it does Democrats. Not to mention that, in the wake of Arizona’s new draconian anti-immigration law, getting behind reform is a way for the Democrats to signal to Latino voters that at least one party is still friendly territory. Democrats are hoping that they can repeat the electoral gains they made off of California’s 1994 crackdown, Proposition 187. That confrontation helped drive Latino votes away from the GOP for years.

Democrats are probably right to think that another major showdown over immigration with an angry, out-of-power GOP will pay off, even though the bill will most likely not pass. That prospect has the conservative base freaked out about an issue of American national identity. And you know what that means: White people -- engage!

Republicans are naturally shocked -- shocked! -- by this hard-boiled cynicism on immigration from the Democrats. The president "wants to put the Hispanic community ... back in a state of agitation," says Dick Morris, who thinks that Democrats don't even want the bill to pass. (Of course, that guy has elevated being wrong about everything to a weird kind of art form.) Tucker Carlson declares, "This is an attempt by the Democratic Party to whip Hispanic voters into a frenzy." The president "doesn’t have any cards to throw down so he goes to the race card," says Fox’s Laura Ingraham. I wonder if Ingraham thought that President Bush was playing the race card when he backed legislation very near to Obama's position on immigration?

So, on the one hand, we’ve got a group of people who want to work and live regular lives free of harassment, and a political party happy to represent that desire. On the other, we have types like Laura Ingraham, who think that is cynical identity politics and "going to the race card," but that supporting apartheid-style passbook legislation in Arizona is totally legitimate. Apparently, it's parochial, quasi-racist demagoguery to worry about keeping migrant families together and ensuring decent wages and working conditions. But a campaign of harassment against immigrants -- that's something everyone can love.