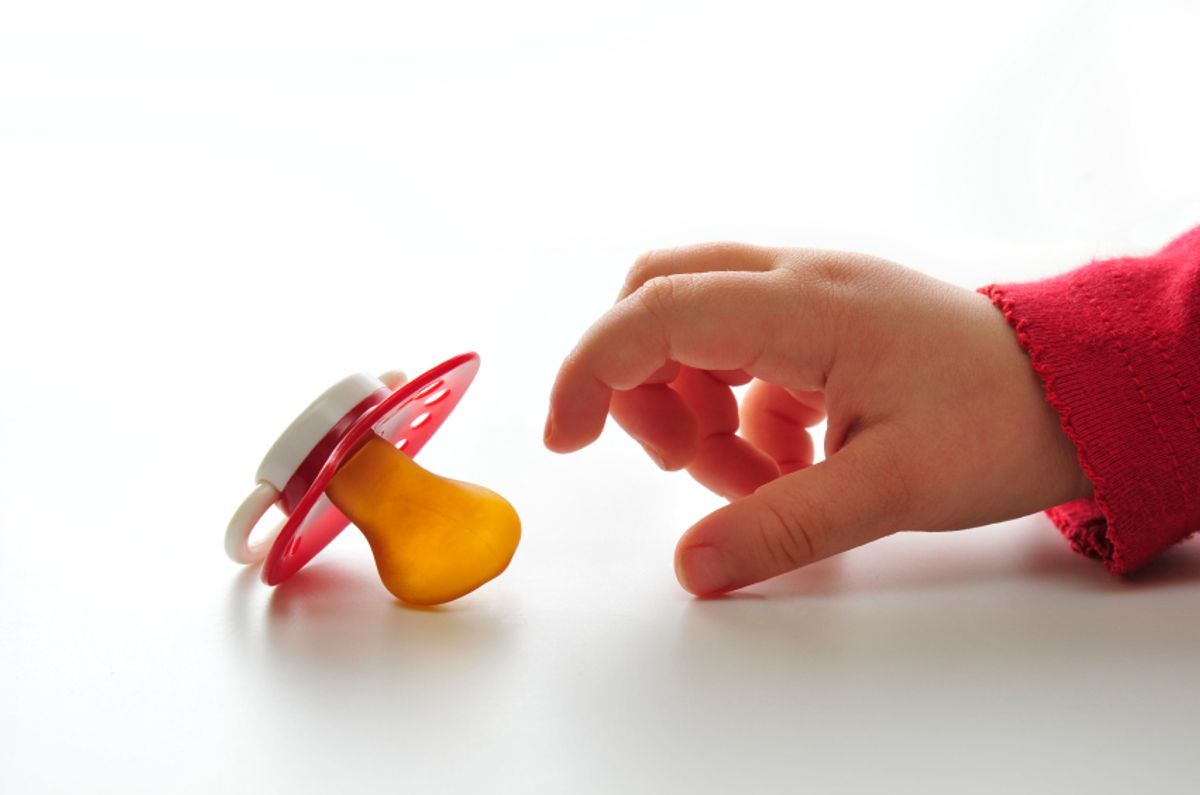 Type "pacifiers" into Google and it immediately -- helpfully! -- asks a common parenting question. "Pacifiers: Are they good for your baby?"

I thought no. Isaiah thought yes. And if he could type, he'd put that "yes" in italics and all caps.

From the moment my son was born, the one and only thing he asked of the world is that it give him something to suck. Isaiah sucked -- poorly -- on his thumbs and fingers and -- expertly -- on dirty laundry, stuffed sheep, our necks, other people's noses. If we had put lumber in his bassinet, he would have sucked it down to driftwood.

Like all newborns, he was a body led around by a mouth. "Sucking is a predominant activity during the first 6 months of life," as the infancy scientist Tiffany Field has written, "just as walking is the predominant milestone at 1 year." It starts early: Ultrasounds frequently capture fetuses sucking on their extremities; babies are born tattooed with sucking blisters.

Sucking was what Isaiah was born to do. So why did I feel wracked about giving him a pacifier? He wasn't wracked about taking it; he thought multicolored silicone was delightfully soothing. And it wasn't just me who felt uncertain about it. Even Google's algorithms knew we didn't know what to make of pacifiers.

Strangely, our contemporary anxieties about pacifiers likely have less to do with the actual objects -- recent research suggests they're helpful, not harmful -- than with their twisted modern history. We've inherited over a century of medical hysteria about infant sucking. No wonder pacifiers get us all worked up.

It's a hysteria that was born in 1879, when a disturbing illustration of a "6 year old thumb pleasure-sucker with active assistance" appeared in a German medical journal. The illustration left no doubt what was meant by "active assistance." The journal article -- "The sucking of the fingers, lips, etc. by children (pleasure-sucking)," by S. Lindner, a German pediatrician -- concluded without equivocation that infantile sucking was the cause of chronic masturbation. Lindner's evidence was a study of 69 children who habitually sucked for comfort. As Lindner himself admitted, only four of those studied sucked with "the active assistance of the genitals," but he took the small number to be proof of his hypothesis.

Unbelievably, this logic carried the day. Lindner's article is the study that launched a thousand parental nightmares. It's the ur-text of orality -- it would inspire Freud several decades later -- and by the turn of the century, Lindner's conclusion was widely accepted: A medical treatise on childhood diseases could plainly state that "infants who persist in the habit of sucking always become masturbators." Pacifiers were as problematic as fingers. "Remember that a baby that has a dummy is like a tiger that has tasted blood," an English health pamphlet warned, using the British term for pacifier. A popular childcare book of the time described a typical pacifier user as "ricketty, pale, pasty, soft, wanting in bone and muscle, feeble, nervous, timid." Taking away the pacifier was not enough. To prevent infants from sucking, parents were instructed to tie their children's hands to their cribs, and if that didn't work, to stuff them inside aluminum mittens.

Psychologists immediately drew a parallel between sucking, with its world-obliterating intensity, and drug addiction; indeed, many concluded that all addiction was sublimated sucking. In 1925, the American psychologist James Mursell went so far as to argue that "the drive behind the smoking habit cannot be due to the specific effects of tobacco as a drug, for these are negligible in any case." The ultimate effects of alcohol and tobacco, he concluded, are "largely fictitious." Sucking was the true menace.

It's a fear that sounds at once far away and close by: Too much sucking is bad. For some reason. Really. Trust us.

Through the middle of the last century, the question of why infants sucked for no apparent reason -- what's known as non-nutritive sucking -- would be a major disciplinary issue in psychology. The research into it was weird, colorful and occasionally bewildering. By the early 1940s, you could find a sentence like the following in a major scientific journal: "Although the writer has witnessed foot-sucking on numerous occasions in two young honey bears the present paper is devoted mainly to a record of thumb- and toe-sucking in the baboon."

As Freud's influence faded, the tenor of the research changed -- infantile sexuality slipped into the background -- but passions remained as intense. The seemingly small, remote subject of infant sucking continued to generate a startling amount of scientific work. As it does today.

Paradoxically, though, the bulk of contemporary research into pacifiers is not about their dangers. It's about their benefits. Premature infants who are given pacifiers mature faster and leave the hospital sooner: Non-nutritive sucking is now a standard part of preterm care. Pacifiers are highly effective pain relievers, dramatically reducing crying during painful procedures like circumcision. They -- somewhat mysteriously -- reduce the risk of SIDS: The American Academy of Pediatrics, in a highly controversial decision, now recommends pacifier use at night and during naps. The pacifier entry in a recent book on infant development includes this unconditional assessment: "Pacifiers provide comfort, promote physiological tranquility, and help in growth and development."

It's a confusing verdict: It seems unequivocal. Things can't be that simple, can they? And according to many doctors and lactation consultants, they aren't. This entry only tells half the story: The real problem with pacifiers is that they impede breast-feeding -- the flimsy, fake nipple confuses the infant and disturbs the natural rhythms of nursing. Weaning soon follows.

In fact, UNICEF/WHO's influential Baby-Friendly Hospital Initiative requires that hospitals "[g]ive no pacifiers or artificial nipples to breastfeeding infants." It makes intuitive sense that pacifiers would disturb breast-feeding. But evidence for it is underwhelming. The best studies on the question conclude that pacifiers, at least if given 15 days after birth, have no effect on the duration or success of breast-feeding. Nipple confusion, for that matter, may simply be a myth. A recent review of the literature concludes that "[p]acifier use should no longer be actively discouraged and may be especially beneficial in the first six months of life."

Isaiah sucked on pacifiers compulsively for a few months. But after they began ruining his sleep -- he'd wake up when they fell out -- we broke him. And after a day, he hardly noticed. He didn't need to suck so much anymore. He'd changed. And we'd survived.

If pacifiers are benign, or even beneficial, it is hard not to feel that what permeates the contemporary pacifier debate is a fundamental distrust of parents: the fear that pacifiers will allow parents to detach themselves from their children -- to substitute a cold, industrial object for warm skin and sweet whispering and a steady heartbeat. It's a modern version of Lindner's worst-case scenario. But I'd like to think that while Isaiah used a pacifier, we had more of ourselves to give him: Screaming exhausts parental love; it doesn't strengthen it.

Of course, the current research on pacifiers might turn out to be flawed. Or maybe too many parents will rely too much on pacifiers. Or who knows. But until any of that happens, it'd be nice for parents -- at least for parents like myself, people who are instinctively, mysteriously allergic to the idea of pacifiers -- to be told that their decision might not much matter. For too long, how babies suck has mattered way too much.

Nicholas Day is a freelance writer who lives in New Haven, Conn.

Nicholas Day is a freelance writer who lives in New Haven, Connecticut.