The "temporary" Delaware senator is protecting the public interest better than most colleagues. Why doesn't he run? 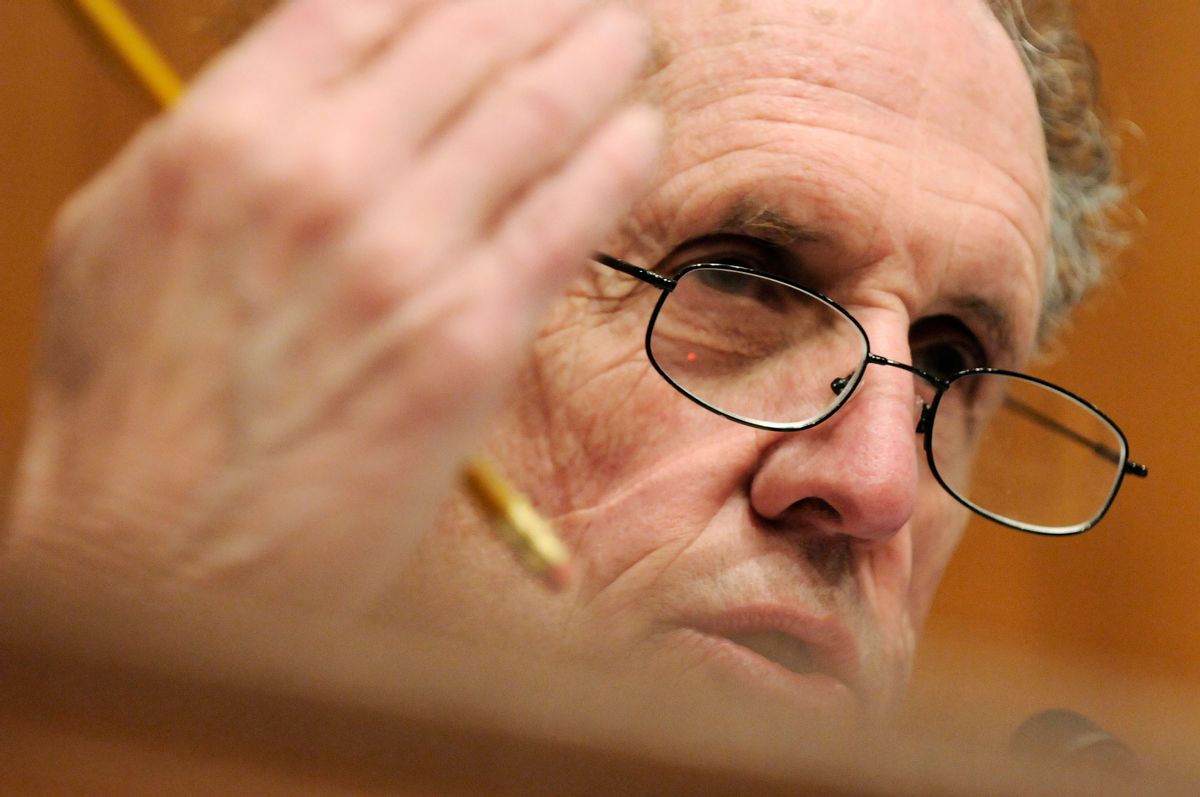 US Senator Ted Kaufman (D-DE) hears testimony on the future of US public diplomacy during a subcommittee hearing of the Senate Foreign Relations Committee on Capitol Hill in Washington, March 10, 2010. With no desire to mount a campaign or keep political power, Kaufman hasn't had to spend time raising millions of dollars to run for office. Instead he's been free to focus on the nation's needs and those of his home state of Delaware. To match interview USA-POLITICS/KAUFMAN. Picture taken March 10, 2010. REUTERS/Jonathan Ernst (UNITED STATES - Tags: POLITICS) (Reuters)
--

It's been great to watch Sen. Ted Kaufman step up and lead on the issue of bank reform. It's not just his proposal, with Sherrod Brown, to break up banks that are "too big to fail." He also backed a late, failed push to get a public option added to the healthcare reform bill. But his smart, calm, quietly outraged questioning of Goldman Sachs executives Tuesday morning finally made me ask: Why isn't Kaufman running to hold his Delaware Senate seat?

I know why: He promised not to, when he was appointed to fill the seat vacated by Vice President Joe Biden. There was a decent reason for his promise -- he'd been a longtime Senate staffer who had never sought or held public office before -- and there was a bad reason: He was being chosen as a temporary caretaker until Attorney General Beau Biden could run for his father's seat in 2010.

The only thing worse than political nepotism is political nepotism that fails. Beau Biden decided to pass on the race. Now the Democrats are without a strong candidate, and GOP Rep. Mike Castle is expected to win in November. So far, there is no Democrat with statewide experience in the race. I mean no disrespect to New Castle County Executive Chris Coons, but every poll taken to date this year (I know, it's early) shows Coons trailing Castle by about 20 points.

There was a strong statewide candidate back in 2008: Former Lt. Gov John Carney. But when he was passed over to give Kaufman the role as caretaker, he opted to run for Castle's open seat (and he's expected to take it.) By the time Biden passed on the election, Carney was well into his House race and decided not to seek the seat. I'm generally a Joe Biden fan, but that was a big fucking deal, Mr. Vice President -- and not in a good way.

Yes, Kaufman could be seen as complicit in that arrangement, which might hamper his standing with Delaware voters. But while he's had the seat, he's voted his conscience and he's led in the ways Biden would have – and maybe even more aggressively, when it comes to bank reform. Some might say that Kaufman is only free to be so aggressively progressive because he's not running for reelection, but I'm not that cynical. I hope Kaufman reconsiders, now that he sees what the job requirements are: strong values, and a little courage. Democrats need more fighters.