Let's get this straight: Older aircraft are not dangerous. And guess who has one of the world's oldest fleets? 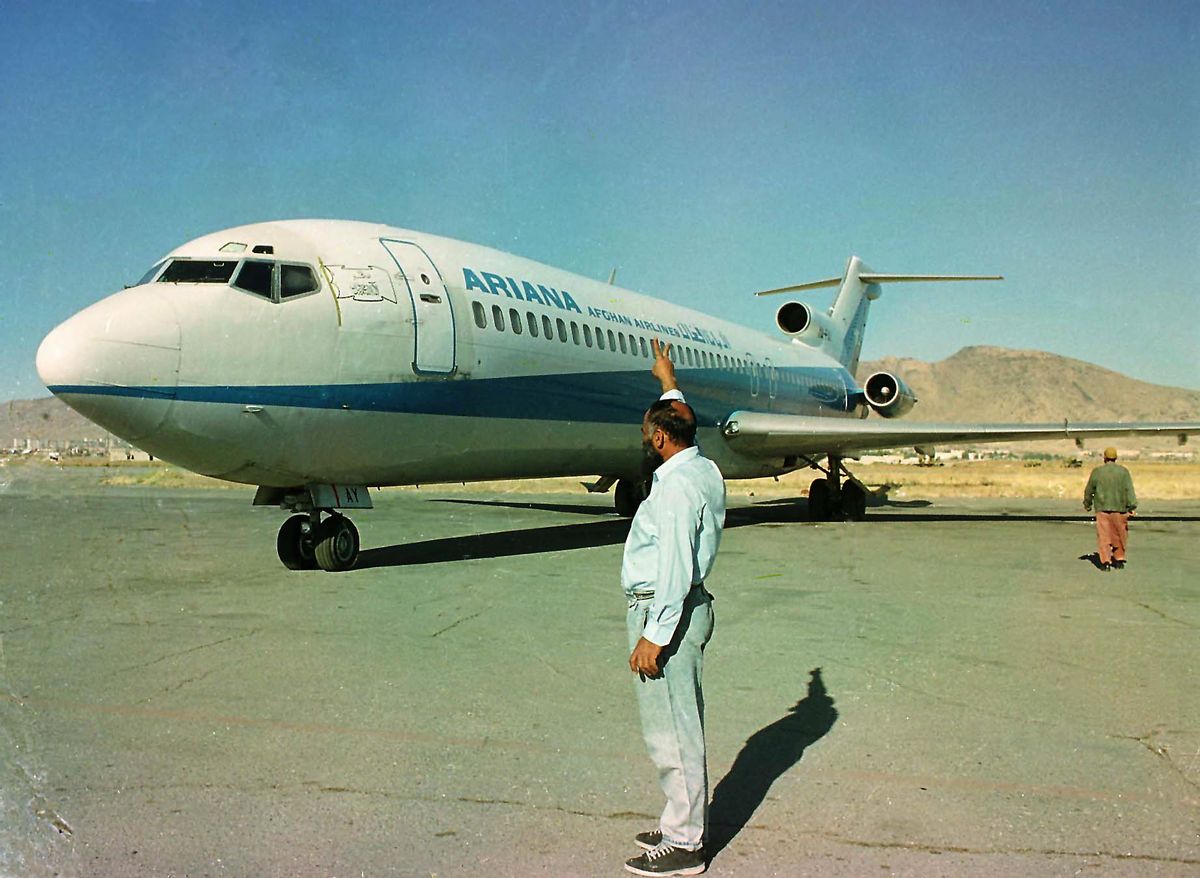 Undated file photo of an Ariana Boeing 727 passenger plane at Kabul airport in Afghanistan. The same type of jetliner with 166 passengers on board was hijacked earlier Sunday, Feb 6, 2000 by unidentified armed hijackers and forced to land at Uzbekistan for refueling before taking off to Moscow. (AP Photo/Amir Shah) (Associated Press)
--

Not this again. More distortions and caricature about those dangerous foreign airlines.

It happened in an interview with Carl Hoffman, journalist and author of "The Lunatic Express." For a far-flung correspondent like Hoffman, getting from place to place can be a challenge.

In 2008, says CNN, "Hoffman embarked on a five-month trip using modes of transportation that most leisure travelers would avoid at all costs but that many people around the planet board every day. He flew on airlines with some of the worst safety records in the world, endured 28-hour trips on buses prone to plunging off cliffs in South America, took overcrowded ferries in the Amazon and Asia, and survived sweltering trains in Africa."

At this point my hype antenna was already twitching, but then came this gem of a question from the interviewer:

"You flew on statistically risky airlines like Ariana, Cubana -- Cuba's national carrier -- and TAM in Brazil. How did you feel on takeoff, knowing that maintenance, training and plane age might be an issue?"

Article over, as far as I'm concerned.

Let's start with "plane age." As I've hit on previously in this column, commercial aircraft are built to last more or less indefinitely -- which is one of the reasons they're so expensive -- and it's not the least bit uncommon for a jet to remain in passenger service for 25 or 30 years. Granted, the older a plane gets, the more and better care it needs in the hangar; inspection and overhaul criteria grow increasingly strict. But a plane's vintage is only part of the equation, and statistically there is little direct correlation between accidents and age.

And as it happens, it's the airlines of the United States that have, on average, the world's oldest fleets. The author references Cubana, Ariana Afghan Airlines, and TAM of Brazil. Ariana has some old birds, it's true, but at the moment most of Cubana's international fleet dates from the early 1990s, putting it at least on a par with the American majors. TAM's fleet belongs nowhere in this conversation; the carrier operates only the latest generation Boeings and Airbuses.

That TAM is mentioned at all is entirely mystifying. Putting this large and successful airline, with a perfectly acceptable safety record, in the same conversation with Ariana Afghan and Cubana, is a nonstarter.

Not that either Ariana or Cubana is particularly unsafe either. Which brings us to the bigger, overarching point: There is no such thing as a truly "dangerous" airline, anywhere. Some are safer than others, but even the least safe airline is still very safe.

The nervous flier's tendency is to make distinctions in an abstract, purely statistical sense rather than a practical one. For instance, go to data banks like Airsafe.com and you can spend hours comparing and contrasting accident rates. But, really, is airline A, with three crashes in 20 years, a safer bet than airline B, with one crash over that same span? Would a careful audit of training, maintenance and day-to-day operations determine that Cubana is, when hashed out in decimal places, a riskier bet than a European or American carrier? Yes, but riskier is not the same as risky, and by the measure of reasonable intents and purposes they're all up to par.

Some airlines will always have reputations that precede them. Aeroflot, for instance. Once by far the largest airline in the world, Aeroflot was splintered into dozens of independent carriers, one of which inherited the Aeroflot name and identity. Based in Moscow, the Aeroflot that exists today operates about 90 aircraft and transports around 7 million passengers annually. It has not had a serious accident in more than a decade.

Korean Air is another. In 1999, Korean was put under FAA sanction after a string of fatal incidents. People still hold this against them, despite the Korean government's ambitious overhaul of its entire air system, and despite a sterling critique by the International Civil Aviation Organization in 2008. It ranked Korea's aviation safety standards, including its pilot training and maintenance, as the highest in the world, beating out more than a hundred other countries.

A list of carriers that have been accident-free since at least 1980 includes not only names like Qantas and Cathay Pacific, but Royal Jordanian, Syrianair, Air Zimbabwe, Tunisair and Uruguay's Pluna. While some of these airlines are very small and make comparatively fewer flights, any unblemished legacy lasting 30 years is impressive on its own accord.

The region of the world with the worst reputation by far is sub-Saharan Africa, where scores of small companies operate without anywhere near the oversight or resources of airlines in the West. But even here the statistics can be misleading. It's important to make the distinction between mainline African air carriers, which are very safe, and lower-tier cargo and non-scheduled commercial operators. Flying on South African Airways, Tunisair or Ethiopian Air Lines, for example, all of whom have respectable records, is not the same as flying aboard a Congolese cargo runner. Africa's "dangerous" airlines are not even airlines as most people think of them.

It's much the same with the EU's controversial airline blacklist. The vast majority of the forbidden operators are airlines that a typical traveler wouldn't ever fly on in the first place. They consist mainly of marginal cargo outfits, most of them based in West and Central Africa. The highest-profile name on the list is, well, Afghanistan's Ariana.

Ariana -- what a beautiful name that is for an airline -- has been around since 1955. While I would not recommend avoiding the carrier altogether, for obvious reasons it currently lacks the resources to meet European safety standards.

When war breaks out, airliners often become a sort of civilian casualty. Ariana's international services had been curtailed after U.N. sanctions in 1999, and eight of its planes were later destroyed in the U.S. bombing.

Iraqi Airways was founded in 1945, and its fetching green livery was once a common sight throughout the Near and Middle East, where the airline was among the most distinguished and reliable for many years. Sanctions forced its grounding during the first Gulf War, and several jets were hangared for protection in neighboring countries (including Iran, which was a bit like Saddam Hussein asking to store one of his personal jets at Andrews Air Force Base). Iraqi Airways is now back in business, with orders for more than 30 new 737s.

Iraq destroyed several jets owned by Kuwait Airways during its short-lived occupation of that country. Defiantly, the airline had kept flying throughout the conflict. Kuwait's 747s were seen in New York even as coalition forces bombarded the retreating Iraqis.

And before we close, an invitation to my local-area readers:

This coming weekend I am hosting a travel photos exhibit at my apartment near Davis Square in Somerville, Mass. This is part of the annual Somerville Open Studios event. Last year more than 200 people stopped by and I'm hoping for a similar turnout. (Yeah, for those of you who were here, mostly it'll be the same pictures, but I'll have a few new ones thrown in. I'll have free fruit and snacks, and the finest "Vintner's Choice" examples from Trader Joe's selection of $3.99 wines. Ask the Pilot hats, T-shirts and books will be for sale. This Saturday and Sunday, May 1 and 2, noon to 5 p.m. Please e-mail for exact directions, or see the Somerville Open Studios website.