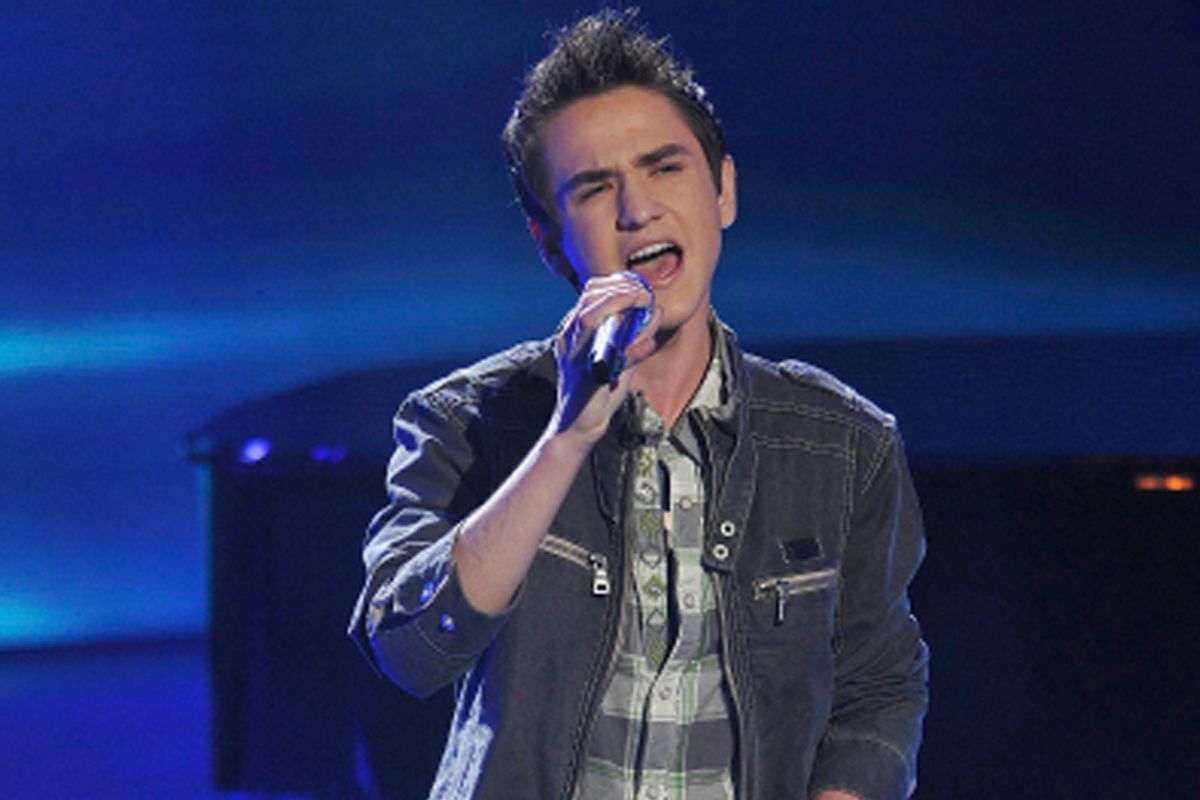 Tuesday night's "American Idol" was like a bad country song (aren't they all?). There were the requisite ballads of cheating hearts, hard luck stories, love gone wrong and mediocre contestants.

The guest mentor was Shania Twain, and the competition featured her music. According to Seacrest, Shania Twain is "the one who made country hot." She's the winner of five Grammys, and her 1997 album "Come on Over" became the best-selling album of all time by a female musician in any genre.

The show started out with the six remaining contestants on the stage standing quietly while Ryan described each contestant in a lame attempt to create faux tension:

These six lives have been changed forever, but only ONE can gain the title, American Idol."

The way this season is going, perhaps Ryan's best advice to them should have been: "Don't quit your day job."

Lee Dewyze: Shania encouraged Lee to start his song with just his voice and the piano. "He's got this fantastic style and cannot be buried by his guitar."

Lee sang "You're Still The One" and, dang it all, he didn't listen to Twain's advice because he started with the guitar. I loved the song, and I think Lee could have brought down the house, but he was initially hesitant and his chorus was slightly off key. He did eventually build into the Lee style that so many know and love.

Randy: "Check it out. One of my favorite songs of all times, but it started out pitchy. Midway through the song, you found a way to make it your own. A pretty good job, dude."

Ellen: "Better than a pretty good job. You couldn't look cuter, and I say, ;All aboard the Shania Twain.'"  That line was cornier than "Hee Haw."

Kara: "Look how far you've come since the beginning until now. That's a love song, and you cracked a smile a few times." Yes, Lee did manage a smile or two, but he looked about as happy as a tick on a fat dog.

Ryan said, "Great feedback from the judges." No, it wasn't! Give the guy some criticism. I've been seeing a trend for a while now: Lee and Crystal never get criticized, while other contestants like Siobhan get hog tied and roasted on a weekly basis.

Michael Lynche: Shania said, "You're one of these guys that could sing the phone book and everyone will melt. Don't take that for granted." Apparently she missed the show where Big Mike was last and almost got voted off.

Sitting in the shadows on the stairs on the stage, Big Mike sang "It Only Hurts When I'm Breathing."

After last week's anemic "In the Ghetto," Big Mike went back to good, ole country basics and sang the song sweet, simple and pure. Tammy Tyree would have been proud.

Ellen: "I was a tiny bit nervous for you, but it felt like Luther Vandross. I felt your emotion... it was beautiful".

Simon:  "I thought the performance was a little wet, like in a musical acting out the words." Wet? Did Simon say, "wet"? The other judges were equally confused and demanded an explanation.

Simon said, "Yes, wet… it was a little bit girly for you, Mike." Since when does "wet" equal "girly"?  Simon either had a very dirty mind or was being completely sexist (duh, it's Simon).

Casey James: Shania said, "I sense that he's missing a bit of inner confidence. Casey, bring it inside and let it come out through your voice." Casey listened.

He sang, "Don't," and I'm thrilled he did. The audience got to focus on his voice, which was not overshadowed by his guitar. He had the "Jesus" look going, with his glowing blond hair, and we all know how much country fans love Jesus.  Dang, Casey was fine like cream gravy and did country proud.

Randy: "Yo, dude, for me this was one of the best Casey James performances EVER. Nice job, baby."

Kara: "You didn't hide, you didn't cover it up with your guitar, and if you keep doing that, you'll be in the front of this competition." OK, Casey was good, but we all know Kara is biased when it comes to Casey, so her opinion doesn't count.

Next up was Crystal Bowersox. Ryan was talking to Crystal about her time with Shania and sadistically rubbed in Crystal's face the fact that Shania has such GLOWING WHITE TEETH. I think Ryan can be quite "wet" himself.

"Sound more happy," Shania told Crystal, the clear front-runner, after she listened to Crystal's song. Crystal, not one to be told what to do about anything, responded that the song she chose was a clear message to her boyfriend who needed to "man up one of these days."

Crystal's boyfriend was in the audience wearing a T-shirt in support of his girlfriend. And no, he is not the father of Crystal's baby, even though his name is Tony and Tony is the name of her baby's father, but that first Tony is back in Bosnia with another woman he had a baby with.  Sounds like a good country song in the making to me!

Crystal sang "No One Needs to Know." I'm a huge fan of Crystal's, and no offense to Shania, but this was the kind of country song that gives country music a bad name. I had a sudden urge to do-se-do and dip some chew in my mouth. The song was choppy, disjointed and Crystal seemed distracted.

Randy: "Yo, yo. It wasn't my favorite performance, but I love you and like seeing you try different things."

Simon: "Oh, I could be in so much trouble. We don't like Crystal this week. It was limp. It was something you would expect in a coffee shop. I didn't feel any conviction from you."

Aaron Kelly sang, "You've Got A Way." Aaron, who suddenly looked like Gomer Pyle, knew how to sing country! I thought it was his best performance by far, and he made me forget he was the tender age of 17. Shania looked like a proud mother.

Kara: "It was like you really felt those words." Aaron said he sang his song for his mother. A collective "Ahhhhhhhhhhhhh" was heard throughout Nashville and L.A.  Any good country crowd loves a mama's boy. (Just don't marry one!)

Simon: "Tonight, you were like a different artist. This is the kind of record you should make. For the first time in weeks, it felt sincere and believable. I think you did really well tonight.  Well done." Hey, Simon liked Gomer!

Siobhan Magnus sang "Any Man of Mine." She was all gussied up, with her cowgirl boots on and looking prettier than a glob of butter melting on a stack of pancakes. Siobhan got down into the audience and sang her heart out, belting out those high notes at the end. I thought she was sensational.

Ellen: "Way to pull the Shania Twain into the station! Fantastic." Ellen was as funny as Minnie Pearl.

Simon: "I really liked that song, and the song choice was perfect. The screaming at the end may have gone on a little bit. It's almost like you were giving birth at the end. If you heard that note in isolation, you might have thought something bad had happened."

Well, tie me to a pig and roll me in the mud! What a surprise, Siobhan got criticized.

My top three (just for tonight):  Siobhan, Aaron and Casey. I'm fairly certain that Crystal just had an off night, but there's a part of me that wonders how seriously she takes this whole "American Idol" thing. I get the sense that she thinks it's a joke, and really who could blame her?

Who will be voted out on Wednesday night's show? Honestly, after Tuesday night, it's hard to say. I suspect that it may have been too little, too late for young Aaron, and he'll be singing, "Take Me Home, Country Roads."

But I'll be back next week for another riveting "American Idol" recap. Y'all come back now, ya hear?