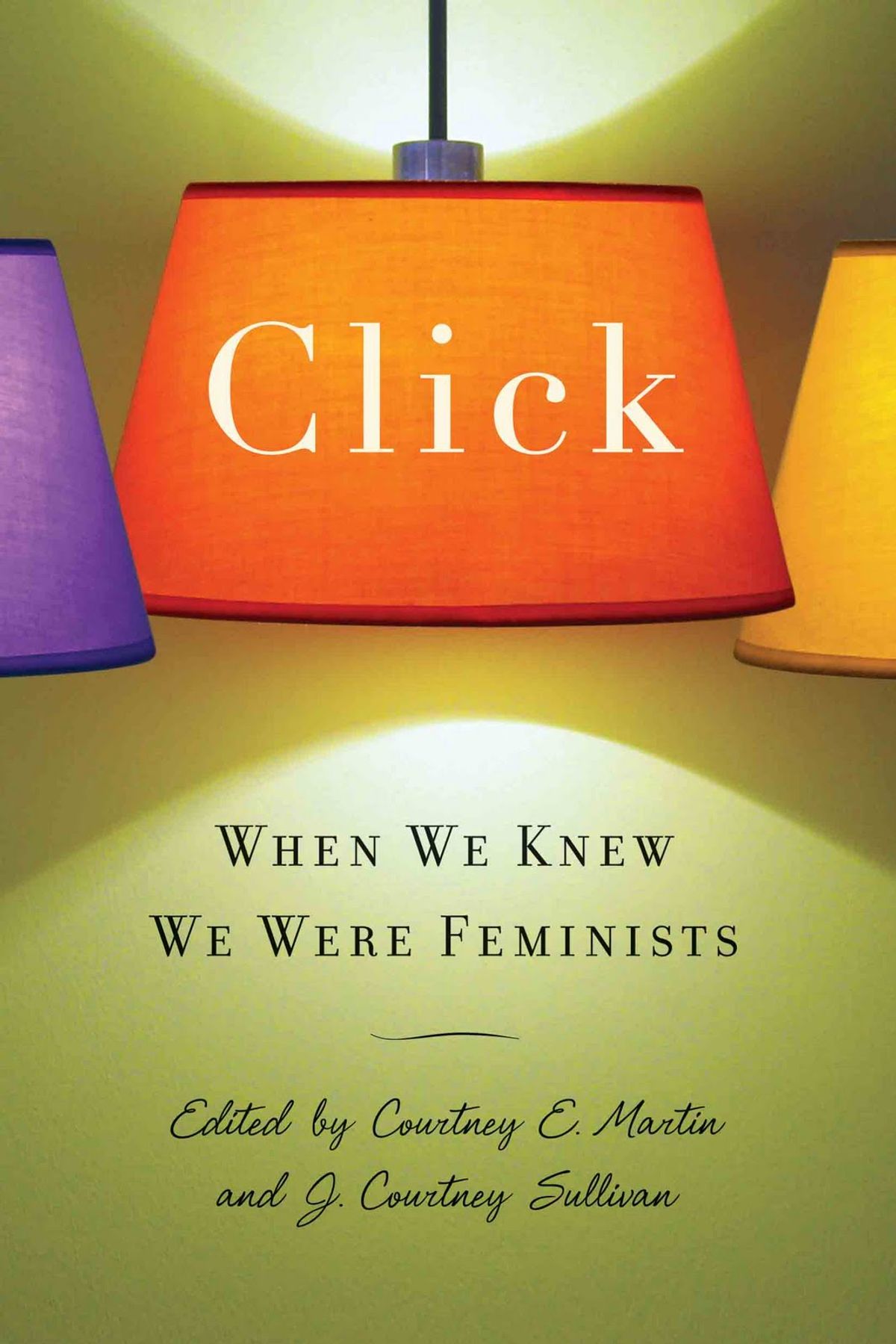 Most growth happens gradually. Kids learn to read, then to question. Braces slowly straighten our teeth. We develop a taste for foods other than chicken fingers. But then there are those changes that happen all at once: "Click moments," we call them, when our perspectives shift and suddenly the world looks different. For many young feminists, that's just what it feels like the first time we identify with the f-word.

That's the subject of a new collection of essays called, appropriately, "Click: When We Knew We Were Feminists,” compiled by editors Courtney E. Martin (Feministing blogger and author of "Perfect Girls, Starving Daughters") and J. Courtney Sullivan (who wrote the bestselling novel about female friends, "Commencement"). Thirty feminists under 40 (including Salon's Rebecca Traister) talk about their own epiphanies, prompted by everything from rape to ADHD, from bad sex education programs to Kurt Cobain’s suicide. Despite this variety, the click moments in the book share one common thread: the realization, as Sullivan put it, that "Wait a minute, this is not fair. This is not an equal society, and there has to be some way of combating that."

J. Courtney Sullivan spoke with Salon over the phone.

I have a distinct memory of a college professor asking in class who was a feminist, and I didn't raise my hand. Within a year, thanks to a couple of great feminist professors, I was angry and assertive about feminism. It was a drastic shift, so the concept of this book really rings true to me. Where did the idea come from?

It goes way back to this Jane O'Reilly essay in the first issue of Ms. Magazine called "The Housewife's Moment of Truth." That essay is where the whole idea of a click moment took form. O'Reilly talks about women in their day-to-day lives going along and then suddenly, click, they realize that sexism surrounds them all the time. I was working on "Commencement," and one of the characters educates another about feminism, and I was trying to think -- why do we call ourselves feminists, if we do? I sent a mass email to a bunch of young feminists. Someone hit "reply all" and wrote what their feminist click was. And then everyone else started replying to all. It was amazing because the responses were so varied. Courtney Martin then said, "This would make a good book."

How did you choose the contributors? What were you going for in the variety?

We had a short list of people we wanted to approach, and we put out an open call on Feministing.com. All of our contributors were in their teens, 20s, and 30s. We created an upper age limit because what we thought was interesting about this generation of feminists was that we grew up with feminism in the air, whether we grew up with mothers who were feminists or in a household where feminism was a dirty word. This was a generation that was responding to our mothers' choices. We wanted to get a wide range of voices, because there's a myth that the movement is only open to people who look or act the same, and that's definitely not the case.

Based on the essays, it seems that people develop their feminist beliefs gradually but the actual act of taking ownership of the word is a lot more sudden and weighted than, for example, the first time they call themselves a Democrat. Why is that?

It can be a loaded term. I know a lot of women who embody what it means to be a feminist but do not want to use that word. The misperceptions about what it's all about have gotten into their heads. To me, it's hugely important to claim the word, because it makes you a part of something. It makes you a part of this bigger community, which is a powerful thing.

I've noticed what frequently follows the click moment is a sense of intense rage. Why is this so?

You have this veil lifted, and rage and anger are often your first emotional responses. Once you know [sexism] is there, you start seeing it everywhere. You start looking for it, learning about it, and you just can't help but see it. This idea of claiming the feminist label and taking that to a proactive place is the next step. It's what you can do with that anger to actually effect change.

In your co-editor Courtney E. Martin's essay, she says she pays attention to what she wears when she speaks on college campuses because she knows that looking cool matters when trying to draw in young women. What do you think? What are some good strategies for bringing young people to feminism?

I remember reading Feministing.com, and that to me opened up this whole world that I didn't know about. These blogs are accessible, and there's any number of girls and boys all over the country and the world who might stumble upon them at any time. I think what Courtney's talking about is giving the message that feminism is relevant. It's turning the assumption that feminism is outdated on its head. And with this book, here are 30 voices to say no to that assumption.

There's an argument that pops up in the news every so often that older feminists complain about a lack of passionate young feminists. It came up recently in Newsweek, specifically about abortion rights. Where does this argument come from? What can be done to bring the generations of feminists closer together?

When you read about it, it seems like there's this great divide, and in some ways there may be. But when you get in a room with a feminist of a different generation, the whole thing changes. Part of it is just getting together and talking. A lot of women from the last generation of feminism want to know that everything they did was not in vain and that we are carrying it on.

Yeah, and so many people in "Click" mention Gloria Steinem and Susan Faludi. We learned about feminism from this previous generation, so the idea that we're enemies is interesting. For whatever reason, various outlets and individuals are committed to making the world think that young girls don't talk or care about feminism anymore, that it's totally over. But it's not.