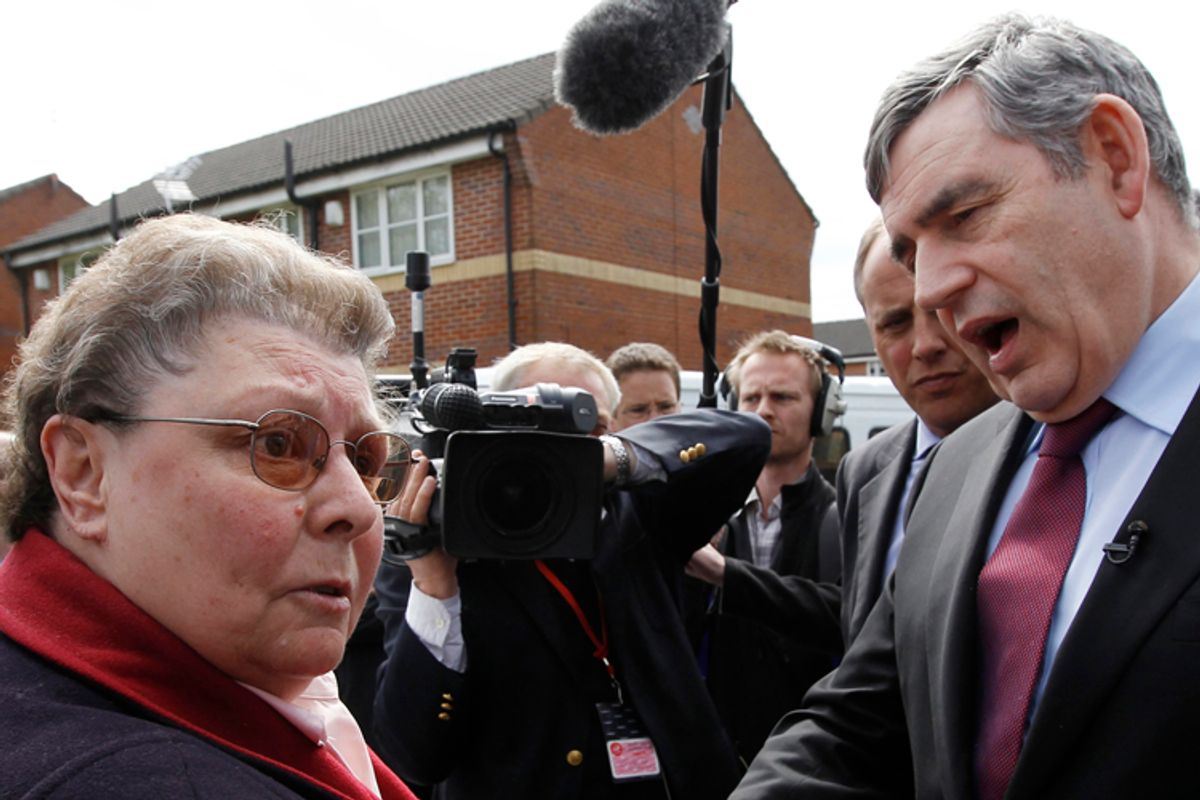 Brown made the first major flub of the country's short campaign season Wednesday, caught on an open microphone calling a 65-year-old voter a "bigoted woman" after she pressed him on immigration during a public meeting.

The British leader, said to have a sharp temper, raged at an aide after mixing with voters in northern England -- but failed to notice he was still wearing a TV microphone, or that it was recording.

It's the latest in a long line of missteps by lawmakers whose private remarks have been made accidentally public -- from President Ronald Reagan's 1984 joke declaration of war on Russia to President George W. Bush's overly familiar "Yo, Blair" greeting in 2006 for Brown's predecessor, Tony Blair.

But the political consequences of his blunder could be severe, with Brown already third in opinion polls for Britain's May 6 election and desperate to show his supposedly statesmanlike credentials to dispatch less experienced rivals, Conservative leader David Cameron and Nick Clegg of the Liberal Democrats.

Brown's campaign team even overhauled its election strategy this week -- betting that more contact between the leader and ordinary people would revive his flagging election hopes.

That was the plan, at least. But then grandmother Gillian Duffy in the northern town of Rochdale, quizzed Brown about issues such as tax policy, education and immigration, telling the prime minister that "you can't say anything about immigrants."

"All these Eastern Europeans ... where are they coming from?" she said.

Brown said that 1 million people had come to Britain from the Continent but that the same number had moved the other way.

"There's too many people now who aren't vulnerable but they can claim, and people who are vulnerable can't claim, can't get it," she said.

The exchange appeared good-natured, but after Brown ducked into his car, he was heard on his open microphone telling an adviser: "That was a disaster. They should never have put me with that woman. ... Whose idea was that? It's just ridiculous."

Asked what Duffy had said to upset him, Brown told the aide: "Everything. She's just a sort of bigoted woman."

Shortly afterward, the BBC played Brown the audio recording as it interviewed him. Brown's head sunk into his hands and he shielded his face from the camera.

Duffy told reporters that Brown's remarks left her shaken. She said she was a lifelong Labour Party supporter and had planned to back Brown, but would now likely abstain.

"He's an educated person. Why has he come out with words like that?" Duffy said. "He's calling an ordinary woman who's just come up and asked questions ... a bigot."

Duffy said Brown had initially appeared receptive as they discussed policy. "I thought he was understanding but he wasn't, was he?" she said.

Asked on BBC radio about his remarks, Brown appeared to suggest that Duffy had been overly critical of eastern European migrants and he claimed to have been frustrated at being unable to properly answer her questions.

Brown told reporters that he had telephoned Duffy to apologize, and his campaign bus later unexpectedly showed up outside her home as he made a personal plea for forgiveness.

"I've apologized to her and I hope she'll accept my apology," Brown said.

"The thing about general elections is that they reveal the truth about people," he said.

Charlie Whelan, a former aide to Brown, used his Twitter Web site to defend the leader. "Who has not let off steam under stress and strain" of a campaign? he wrote. "He's apologized, move on."

Other allies also rushed to Brown's defense. "This is something that he knows he shouldn't have said," said Treasury chief Alistair Darling, a Labour lawmaker.

Ivor Gaber, a political campaign analyst at London's City University, said the incident would damage Brown but may not prove fatal.

"People know that Brown is no angel, and though this won't do him any good, it's not certain how his will play out," he said.