Media: We don't know what happened -- but Dems won

The Democrats score a big victory on bank reform by ... giving the GOP and Wall Street the one thing they wanted? 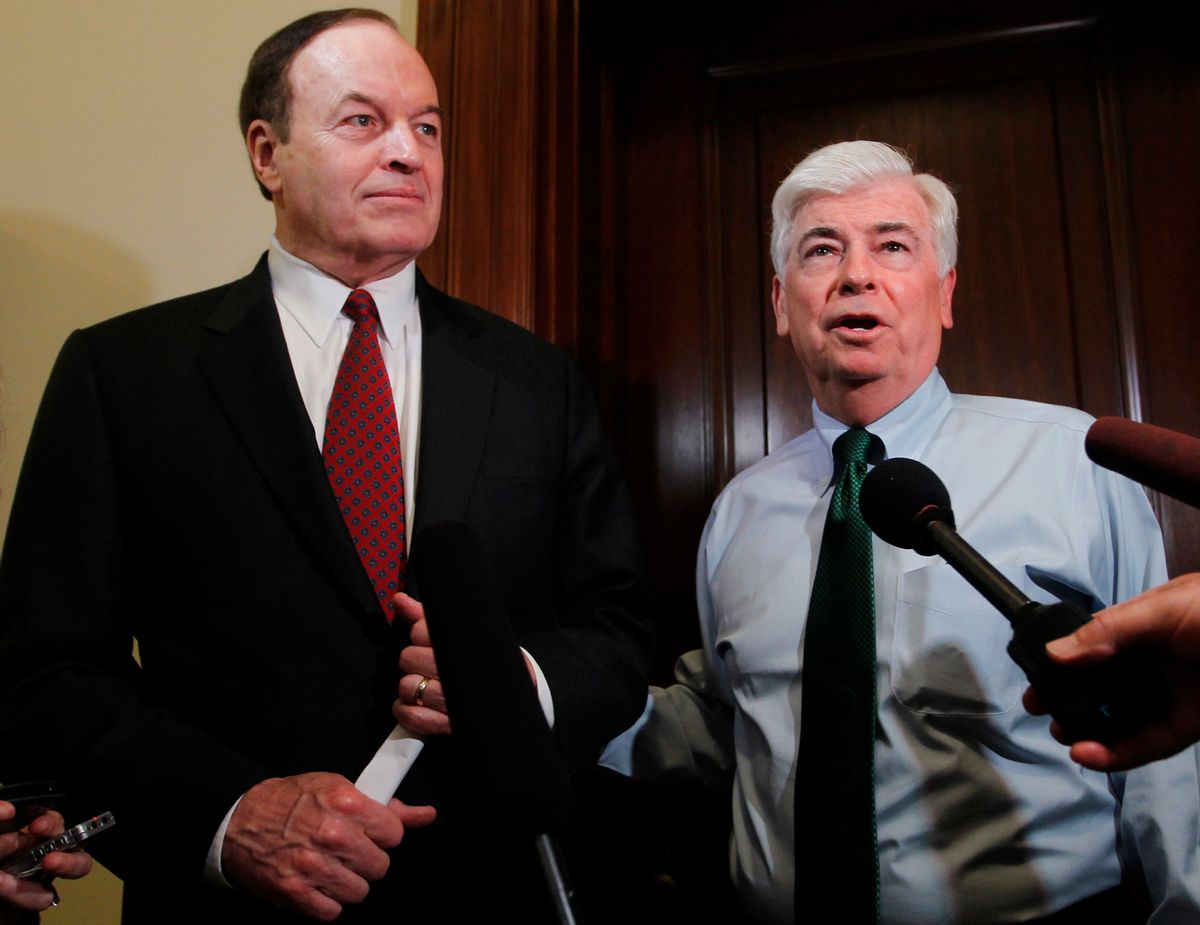 The lack of details regarding the deal Senate Democrats cut with Senate Republicans to allow debate to proceed on the financial reform bill is a bit worrying. But that has not stopped and will not stop the press from pronouncing this a "big win" for Democrats. They just might've won the privilege of making the bill less effective!

The Slumber Party is canceled. Richard Shelby, R-Ala., gave Senate Super-Minority Leader Mitch McConnell an excuse to give the Republicans permission to vote to allow debate to proceed, which means we are only an additional theoretically infinite number of veto points away from a lightly regulated financial industry operating under marginally more scrutiny and a few more restrictions than they were when they broke the world economy.

But we don't know what happened yet. Maybe when Majority Leader Harry Reid announced that the Senate would pull an all-nighter, that actually broke the Republican will to delay. Or maybe Chris Dodd, D-Conn., offered Richard Shelby some sort of minor, face-saving concession. Or maybe Richard Shelby won an actual concession.

According to "Roll Call," "one Democratic source said Republicans had been promised votes on an unspecified number amendments."

This, from McConnell's statement, doesn't explain much more:

"The time afforded by my Republican colleagues and Sen. Ben Nelson was instrumental in gaining assurances from the Chairman that changes will be made to end taxpayer bailouts and the dangerous notion that certain financial institutions are too big to fail."

Here's the problem with interpreting that statement: when McConnell says "end taxpayer bailouts," what he means is, "do nothing to prevent future bailouts except promise there won't be any of them." And when he says the "too big to fail" thing, he does not mean he wants to do anything to restrict the size of major financial firms; what he means is "pretend gigantic financial institutions won't bring down the world economy when we choose not to bail them out because we promised no more bailouts." (Don't worry, world economy: In Mitch McConnell's Ideal America there will still be plenty of bailouts. You just won't be allowed to predict their necessity.)

And the AP says that Dodd "agreed to tighten language in the bill giving regulatory agencies some flexibility to assist banks." (I'm not going to pretend I know what that means.)

According to the New York Times, "Republicans insisted" that they "won" the "elimination" of the liquidation fund. Which doesn't sound like "folding" so much as "winning"? (But we'll see! Maybe Republicans are just pretending they won so that they can whine that they were betrayed the next time it comes up.)

Still: Most of the stories seem to be suggesting that Republicans "caved" even as it's reported that Republicans think they won on the resolution authority. MSNBC even declared this small step forward a "big win for Democrats." Which is true if you believe that what the Democrats would like to do is "have a vote on a bill so that they can say they voted for a bill." (It's also a victory if what the Democrats want is to go to bed at a reasonable hour tonight. Big win on that front!)

If you believe that what the Democrats actually intend to do is "fix the financial industry so that this sort of thing doesn't happen again," then we have no way of knowing if this is a "win" for the Democrats or "another huge pointless concession by the Democrats, this time on the one subject where they enjoy broad, bipartisan support from everyone in America except the people with all the money."

Now we'll see if Democrats themselves, individually and as a party, actually subscribe to that MSNBC/Politico model.  Because if that's the assumption they're currently operating under -- that it'd be a Big Win just to have a vote on a bill that says "Financial Reform" on the top -- then I imagine that as soon as Republicans officially make Consumer Protection the new subject of their ire that that will be summarily dropped, too.

Then, once the bill is a series of targeted tax cuts and the words "NO MORE BAILOUTS EVER AND WE MEAN IT" written 50 times (in permanent marker!) the Democrats can really win big by barely passing it after a contentious all-night session and then throwing themselves a big ol' signing party, all while staying on the right side of the money people.

(Meanwhile, in an alternate universe, this took so long because "[t]he Democrats wanted to force the GOP to filibuster 'Wall Street reform' a few times in order to milk their political advantage." So cruel of those dastardly Democrats, to force the Republicans to filibuster a motion to proceed with debate for three days!)