"Anatomy of an Epidemic": The hidden damage of psychiatric drugs 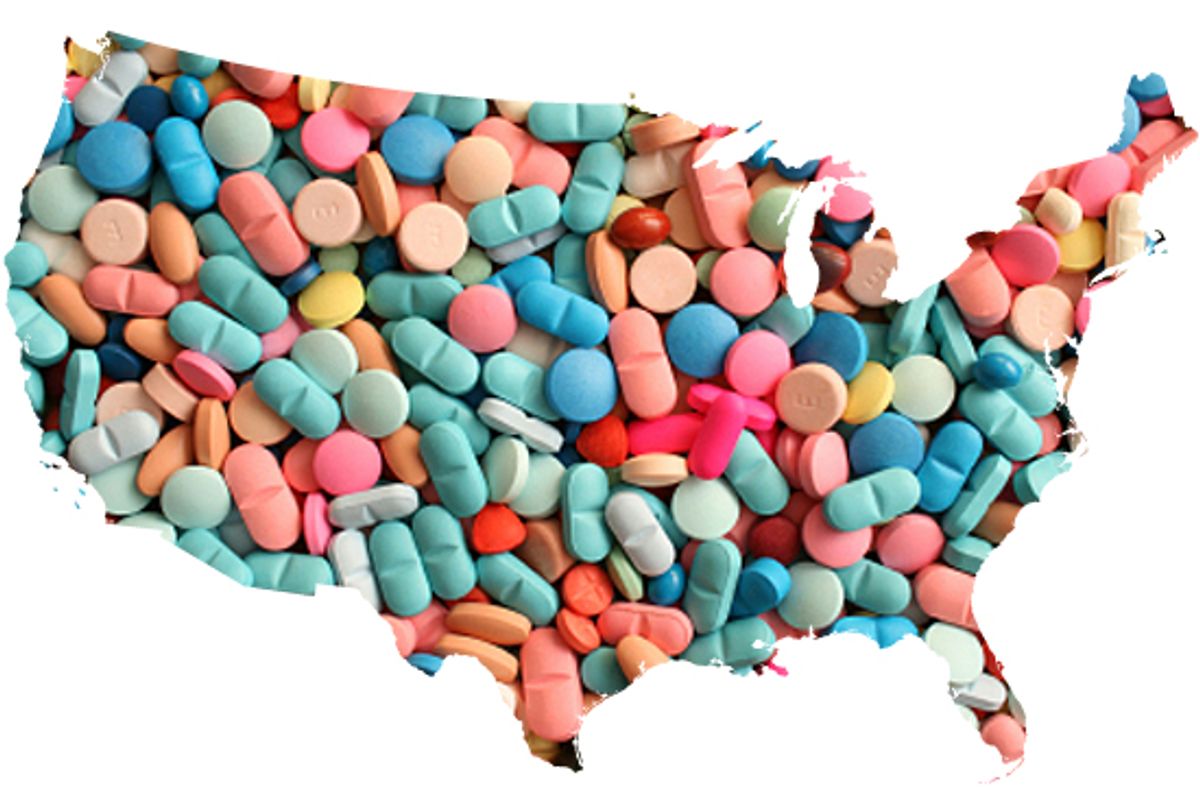 In the past few months, the perennial controversy over psychiatric drug use has been growing considerably more heated. A January study showed a negligible difference between antidepressants and placebos in treating all but the severest cases of depression. The study became the subject of a Newsweek cover story, and the value of psychiatric drugs has recently been debated in the pages of the New Yorker, the New York Times and Salon. Many doctors and patients fiercely defend psychiatric drugs and their ability to improve lives. But others claim their popularity is a warning sign of a dangerously over-medicated culture.

The timing of Robert Whitaker’s "Anatomy of an Epidemic," a comprehensive and highly readable history of psychiatry in the United States, couldn’t be better. An acclaimed mental health journalist and winner of a George Polk Award for his reporting on the psychiatric field, Whitaker draws on 50 years of literature and in-person interviews with patients to answer a simple question: If "wonder drugs" like Prozac are really helping people, why has the number of Americans on government disability due to mental illness skyrocketed from 1.25 million in 1987 to over 4 million today?

"Anatomy of an Epidemic" is the first book to investigate the long-term outcomes of patients treated with psychiatric drugs, and Whitaker finds that, overall, the drugs may be doing more harm than good. Adhering to studies published in prominent medical journals, he argues that, over time, patients with schizophrenia do better off medication than on it. Children who take stimulants for ADHD, he writes, are more likely to suffer from mania and bipolar disorder than those who go unmedicated. Intended to challenge the conventional wisdom about psychiatric drugs, "Anatomy" is sure to provoke a hot-tempered response, especially from those inside the psychiatric community.

Salon spoke with Robert Whitaker over the phone about the reasons behind the pharmaceutical revolution, how "anxiety" became rebranded as "depression," and what he thinks psychiatrists are hiding from the American public.

Psychiatric drug use is a notoriously tough subject for writers, because of all the contradictory research. Why wade into it?

In 1998, I was writing a series for the Boston Globe on abuse of psychiatric patients in research settings. I came across the World Health Organization’s outcomes study for schizophrenia patients, and found that outcomes were better for poor countries of the world -- like India, Colombia, Nigeria -- than for the rich countries. And I was startled to find that only a small percentage of patients in those countries were medicated. I also discovered that the number of people on disability for mental illness in this country has tripled over the last 20 years.

If our psychiatric drugs are effective at preventing mental illness, I thought, why are we getting so many people unable to work? I felt we needed to look at long-term outcomes and ask: What does the evidence show? Are we improving long-term outcomes or not?

But you claim in the book that psychiatrists have long known that these drugs can cause harm.

In the late 1970s, Jonathan Cole -- the father of American psychopharmacology -- wrote a paper called "Is the Cure Worse Than the Disease?" that signaled that antipsychotics weren't the lifesaving drugs that people had hoped. In it, he reviewed all of the long-term harm the drugs could cause and observed that studies had shown that at least 50 percent of all schizophrenia patients could fare well without the drugs. He wrote, "Every schizophrenic outpatient maintained on antipsychotic medication should have the benefit of an adequate trial without drugs." This would save many from the dangers of tardive dyskinesia -- involuntary body movements -- as well as the financial and social burdens of prolonged drug therapy. The title of the paper poignantly sums up the awful long-term paradox.

Why didn't this change people's minds about psychiatric drugs?

Psychiatry essentially shut off any further public discussion of this sort. And there’s a reason for this. In the 1970s, psychiatry felt that it was in a fight for its survival. Its two prominent classes of drugs -- antipsychotics, and benzodiazepines like Valium -- were coming to be seen as problematic and even harmful, and sales of these drugs declined. At the same time, there’d been an explosion in the number of counselors and psychologists offering other forms of non-drug therapy.

Psychiatry saw itself in competition for patients with these other therapists, and in the late 1970s, the field realized that its advantage in the marketplace was its prescribing powers. Thus the field consciously sought to tell a public story that would support the use of its medications, and embraced the "medical model" of psychiatric disorders. This took off with the publication of the Diagnostic and Statistical Manual of Mental Disorders III in 1980, which introduced many new classes of “treatable” disorders.

In a recent New Yorker article, Louis Menand suggested that anxiety drugs were rebranded as antidepressants in the '80s, because anxiety drugs had acquired a bad name. Is that really true?

Depression and anxiety are pretty closely linked. Before benzodiapenes came out, the discomfort that younger people and working people felt was seen as anxiety, by and large. Depression was seen as less common, a disease among the middle-aged and older. It was this deep thing, where people are putting their heads in their hands and can’t move. But when the benzodiazepines were proven to be addictive and harmful, the pharmaceutical companies said, in essence, "We have this market of people who feel discomfort in their lives, which we used to call anxiety. If we can rebrand it as depression, then we can bring a new antidepressant to market." It was a reconceptualization of discomfort, and it opened up the giant market for antidepressants as we see today.

And yet many studies have shown that antidepressants can treat depression, especially in severe cases.

In severe cases, you do see that people benefit from antidepressants, and that shows up consistently. But you still have to raise the question, even in that severe group: What happens to those medicated patients in the long term, compared to what happened in previous times? One thing that surprised me, looking at the epidemiological literature from the pre-antidepressant era, is that even severely depressed, hospitalized patients could with time expect to get well, and most did. Today, however, there’s a high incidence of patients on long-term drug therapy that become chronically ill.

What about stimulants used to treat ADHD. How effective are they?

These stimulants alter behavior in a way that teachers can appreciate. They subdue finger-tapping and disruptive symptoms. But in the 1990s, the National Institute of Mental Health started looking to see if things like Ritalin were benefiting kids with ADHD, and to this day they have no evidence that this drug treatment improves long-term functioning in any domain -- the ADHD symptoms, lower delinquency rates, better performance at school, et cetera. Then the NIMH studied whether these drugs provide a long-term benefit, and they found that after three years, being on medication is actually a marker of deterioration. Some patients’ growth has been stunted, their ADHD symptoms have worsened. William Pelham, from the State University of New York at Buffalo and one of the principal investigators in that study, said, "We need to confess to parents that we’ve found no benefit." None. And we think that with drugs, the benefits should outweigh the risks.

What's so risky about Ritalin?

For one, a significant percentage -- between 10 and 25 percent -- of kids prescribed medication for ADHD will have a manic episode or psychotic episode and deteriorate in such a way that they’re diagnosed with bipolar disorder. A similar study in 2000 on pediatric bipolar disorder reported that 84 percent of the children treated for bipolar illness -- at the Luci Bini Mood Disorders Clinic in New York -- had been previously exposed to psychiatric medications. The author, Gianni Faeda, wrote, "Strikingly, in fewer than 10 percent of the cases was diagnosis of bipolar disorder considered initially." The reality is that until children were medicated with stimulants and antidepressants, you didn't see juvenile bipolar mania.

But if these studies are so groundbreaking, why have they gone unreported in the media?

Because the NIMH didn’t announce it. Just as they didn’t announce the 2007 outcome study for schizophrenia patients. In that study, the recovery rate was 40 percent for those off meds, but only 5 percent for those on meds. I checked all the NIMH press releases for 2007, and found no release on this study. I found no announcement of it in any American Psychiatric Association publication or textbook. Not a single newspaper published an account of the study. And that’s because the psychiatric establishment -- the NIMH, the APA, even the National Alliance on Mental Illness, an advocacy organization -- did not put out any press release about it or try to alert the media in any way.

Are you suggesting that psychiatrists are beholden to pharmaceutical companies?

Not exactly, although most of the leading academic psychiatrists act as consultants, advisors and speakers for them. The problem is that psychiatry, starting in 1980 with the publication of the DSM-III, decided to tell the public that psychiatric disorders were biological ailments, and that its drugs were safe and effective treatments for those ailments. If it suddenly announces to the public that a long-term NIMH-funded study found that the 15-year recovery rate for schizophrenia patients was 40 percent for those off meds and 5 percent for those on meds, then that story begins to fall apart. By not reporting the results, psychiatry maintains the image of its drugs in the public mind, and the value of psychiatrists in today’s therapy marketplace.

So do you think psychiatric drugs should be used at all?

I think they should be used in a selective, cautious manner. It should be understood that they’re not fixing any chemical imbalances. And honestly, they should be used on a short-term basis. But beyond this, I think we should look at programs that are getting very good results. This is what I love about Keropudas Hospital’s program in Finland. They have 20 years of great results treating newly psychotic patients. They see if patients can get better without the use of meds, and if they can’t, then they try them. It’s a best-use model, not a no-use or anti-med model. It fits with our studies done in the 1970s that found if you use this model, you get better outcomes, and a good number of people get better and go on with their lives.