Culinary pros argue about what produces the best recipe: rigorous tests or consensus of multiple cooks 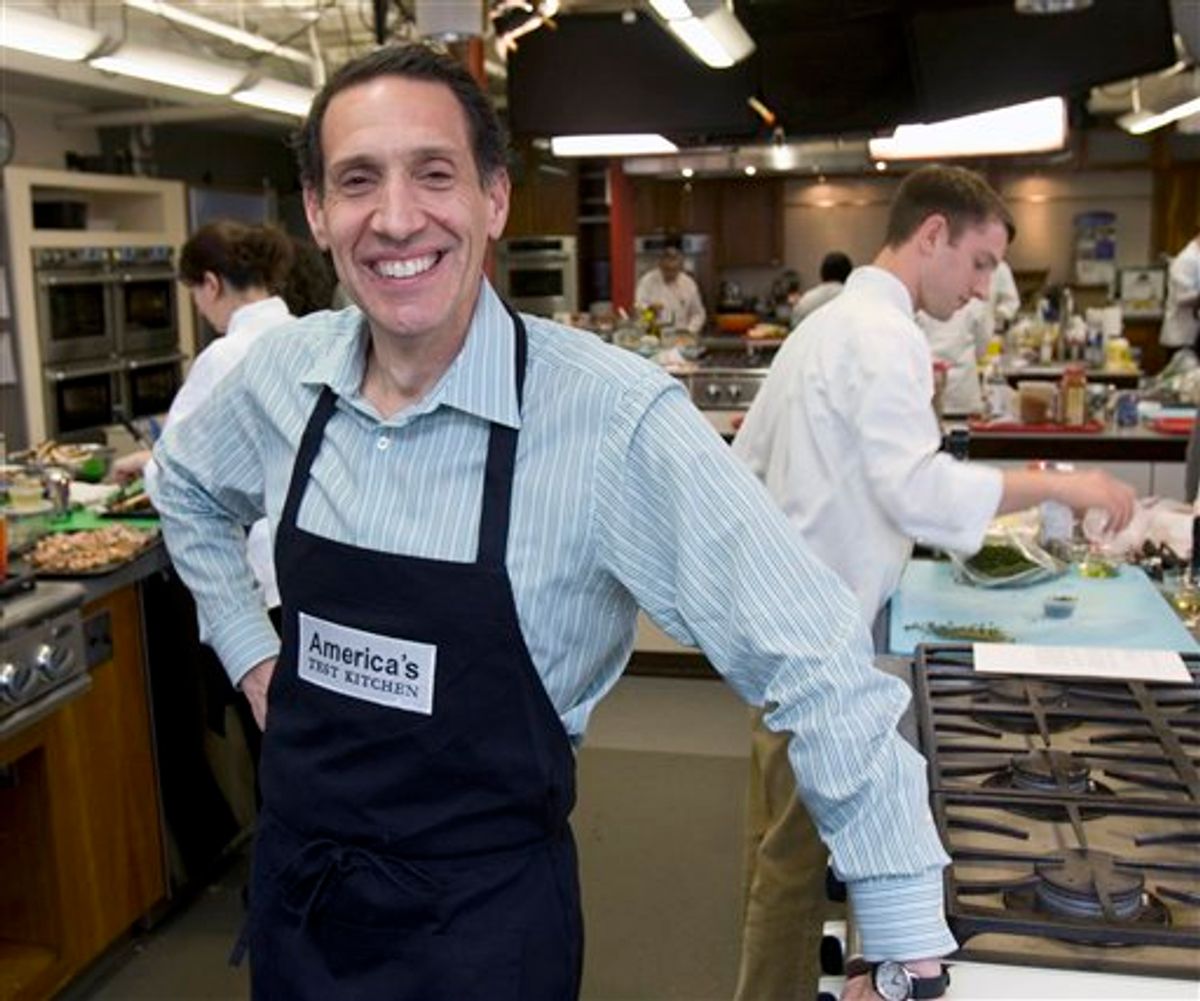 Everyone loves a good food fight. And there's a sizzler going on right now between the culinary pros at Cook's Illustrated magazine and the website Food52.com, an online community for home cooks.

At issue: what produces the better recipe -- rigorous professional test kitchen protocols or the online consensus of multiple cooks.

It began last fall, when Cook's founder Christopher Kimball threw down the oven mitt with a blog post saying a test kitchen is likely to produce a better recipe and declaring, "I am willing to put my money, and my reputation, where my big mouth is."

Food52, which was started by Merrill Stubbs and Amanda Hesser, cookbook author and former food writer for The New York Times, took up the challenge and the contest took shape.

Each side was to come up with two recipes, one for chewy sugar cookies, one for roasted pork shoulder. The results from each side will be posted on the online magazine Slate, then put to a public vote.

At Cook's, editorial director Jack Bishop thinks portraying the contest as a battle of old-line vs. online is oversimplifying. He says Cook's gets plenty of reader feedback on its recipes.

At Food52 the workflow is reversed. Hesser and Stubbs test recipes readers submit, then use their experience to select the best.

Stubbs, a veteran food writer who trained at the Cordon Bleu and also, as it happens, interned at the Cook's test kitchen, notes home cooks are the original "old guard" of cooking. She sees Cook's as "more about consistency and they've said that to us directly," she said in an interview Tuesday.

"That's something they're proud of, and they should be," she said. "We're really interested in the stories behind the recipes, how the recipes come to be, why they come to be and the people behind them."

One of the recipes submitted for sugar cookies to Food52 (not a finalist) described the cookie dough as being ready when it looked like freshly scooped ice cream, Hesser said. "That is the kind of thing you get from real people cooking in their own kitchen."

An introduction to the contest will be posted on Slate on May 5. Readers will then have two weeks to test the final recipes from both sides. Results from the voting that follows are expected later in the month, said Juliet Lapidos, food editor at Slate.

As the showdown approached, Bishop was hopeful. "I like our recipes quite a lot, but you never know. That's the beauty of an election."

Stubbs and Hesser thought it was likely Cook's, with its larger audience, would win, though Hesser added, "We're competitive. We'd like to win."

The Cook's testing process is, to say the least, thorough.

A typical recipe begins with research that leads to a folder of 50 to 100 recipes, which then are boiled down to a composite. That's when work begins at the test kitchen, a 2,500-square foot facility just outside Boston that is home to the magazine's more than three dozen full-time cooks and product testers.

Each ingredient and method of the recipe is tested and tinkered with over a period of a month or more. When a final recipe has been developed, it then is vetted by a professional tester. It also goes out to 2,000 volunteer testers, of whom about 100 will make the recipe and fill out an online questionnaire. Unless there's an 80 percent approval rating, it's back to the mixing bowl.

For the contest, Cook's came up with a chai spiced sugar cookie that Bishop says "is pretty creative." It's recognizable, "but it isn't your grandmother's sugar cookie."

At Food52, regular contests are held. Upcoming recipe themes are announced on Fridays, submissions are reviewed and then Stubbs and Hesser taste their favorites among the submissions and put two up for vote with the winner slated for an upcoming Food52 cookbook.

Reaction to the contest has been as varied as you would expect.

"Who cares?" he said, predicting that neither side will be swayed regardless of the outcome.

Holstrom, president of Guy du Vin, a Portland, Ore.-based online wine retailer and consulting company, said it's possible to get good results from recipes produced by either methodology, "but my experience is I tend to get a more reliable end result from Cook's Illustrated or something in that mold."

The problem with blogged recipes, in Holstrom's view, is it's hard to know whether they come from a talented or trained chef, or are simply the musings of someone who is a disaster in the kitchen.

Emily Nunn, a food writer in Chicago who is a fan of Food52 and has submitted recipes to the site, uses Cook's Illustrated cookbooks, but thinks "there's something qualitatively different about what's going on at Food52."

With something like a Cook's recipe it's been decided that there's one way to make a dish. Food52 recipes, on the other hand, "have a history. You learn about the people who are submitting them, and you understand what kind of a chef Mrs. Wheelbarrow is. I kind of know these people now."

What Nunn finds most appealing about Food52 is its ability to engage and inspire. The message to readers, to her mind: "You can try to make the supposedly perfect beef stew, you can learn how to make the perfect layer cake, but you can also make beautiful food that reflects something richer than just formal training."