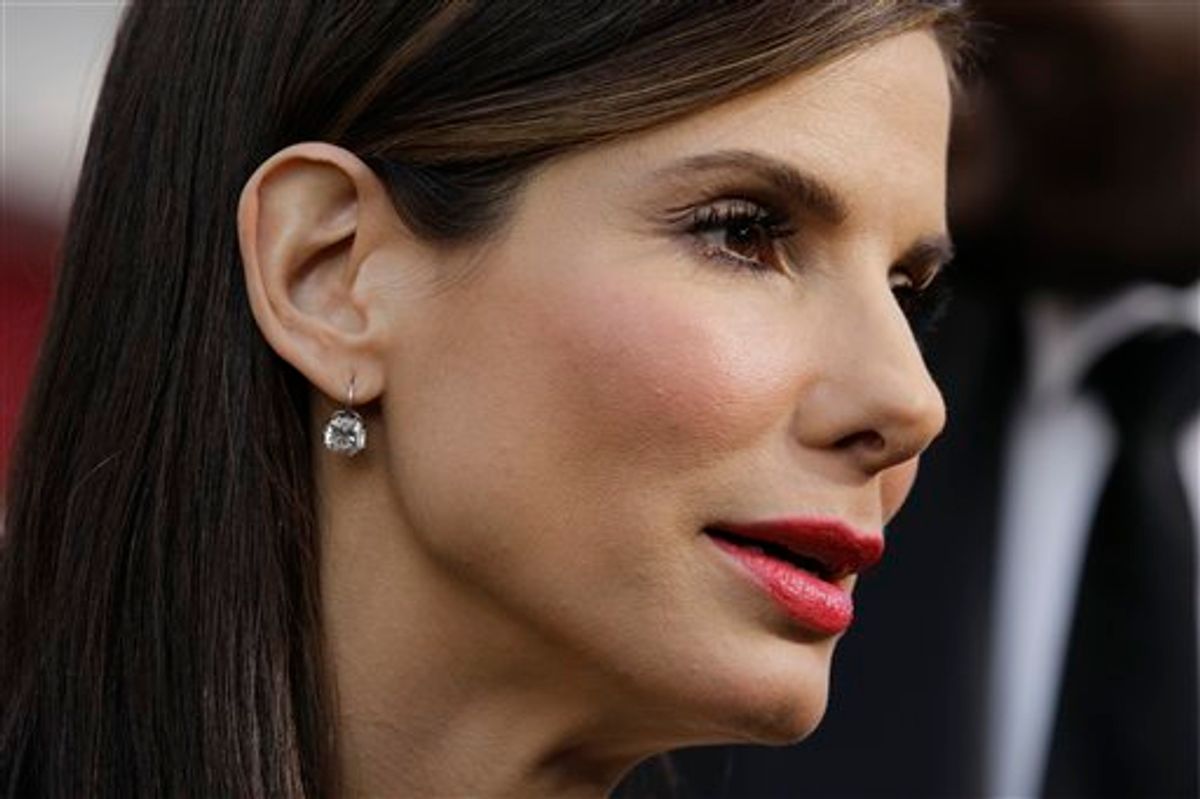 FILE - Sandra Bullock, arrives at the 82nd Academy Awards in this March 7, 2010 file photo taken in the Hollywood section of Los Angeles. In a story posted Wednesday April 28, 2010 on People magazine's website, Sandra Bullock says she has filed for divorce from her husband, Jesse James. The Oscar-winning actress also reveals that she is adopting 3 1/2-month-old boy, Louis Bardo Bullock as a single parent. (AP Photo/Amy Sancetta, File) (AP)
--

Sandra Bullock has filed for divorce from her husband, Jesse James, and is adopting a baby boy as a single parent, a story posted Wednesday on People magazine's website.

"Yes, I have filed for divorce," the 45-year-old Oscar-winning actress said in an interview with People. "I'm sad and I am scared."

Bullock and James, 41, began the adoption process four years ago, the report said, and brought 3 1/2-month-old Louis Bardo Bullock home in January but decided to keep the news to themselves until after the Academy Awards.

In the interview, Bullock said she is savoring her new maternal status.

"You wake up, you feed, you burp, you play, you do laundry," she said. "I'm still in that stage where I'm just amazed with him and at life."

"All I said when I met him was, 'Oh, there you are.' It was like he had always been a part of our lives."

The baby, called Louie, is named after jazz great Louis Armstrong, who had particularly touched her with his signature song, "What a Wonderful World," said Bullock. The child was born in New Orleans, a city where Bullock and James had both spent time after Katrina.

Bullock said she got the call that a baby might be available for adoption during what she described as "the media craziness of the awards season."

Deciding to shield Louis from that turmoil, she kept his existence a secret from all but a few trusted associates and loved ones. Her life (and his) became an ongoing process of secrecy and diversion.

"Just the doctors' visits were filled with decoys and dark cars," she said. "People that I had worked with for years couldn't understand why I wouldn't let them into my house for (Oscar ceremony gown) fittings."

James and Bullock separated in March after five years of marriage, following reports that James had been unfaithful.

Bullock won the Oscar for best actress for her role in the blockbuster hit "The Blind Side," on March 7. Within days of her win, the cheating allegations became public and Bullock went into seclusion.

The motorcycle mogul publicly apologized to Bullock and his children, Sunny, 6; Jesse Jr., 12; and Chandler, 15. He recently returned home after a 30-day stay in a treatment facility where he sought help for "personal issues," the People story said.

When asked about whether James had cheated, Bullock said she "had no idea about anything."

"I did the only thing I could do, and that was to pack enough clothes to live on, get all of Louis' things and get out of town. My main concern was Louis."

When asked whether James will have any formal parenting role, she replied: "I will be adopting as a single parent. Anything else will be taken day by day."

Of her relationship with James' three children, Bullock said, "I don't want to know what life is like without those kids. ... Whatever we need to do, in the healthiest way, we are going to be co-parenting."

Looking ahead to life without James, Bullock said, "I really don't know how our paths will intersect in the future, but the father I have known Jesse to be with all the kids is one that I hope Louis can experience one day, no matter how Jesse and I go on with our lives."

News of the adoption quickly seized the attention of fans of Bullock and fellow celebrities alike.

On Wednesday morning's "Live! With Regis and Kelly," host Regis Philbin held up a copy of People magazine, which shows Bullock smiling at her baby son as she holds him aloft.

"It's not very easy to adopt a baby," Philbin said.

"Good for Sandy! Soo cute! The best love is from your child!" declared LScott17.