What would happen if an American politician called someone a bigot?

Gordon Brown, the "bigot," and the dysfunctional relationship of elites and the working class 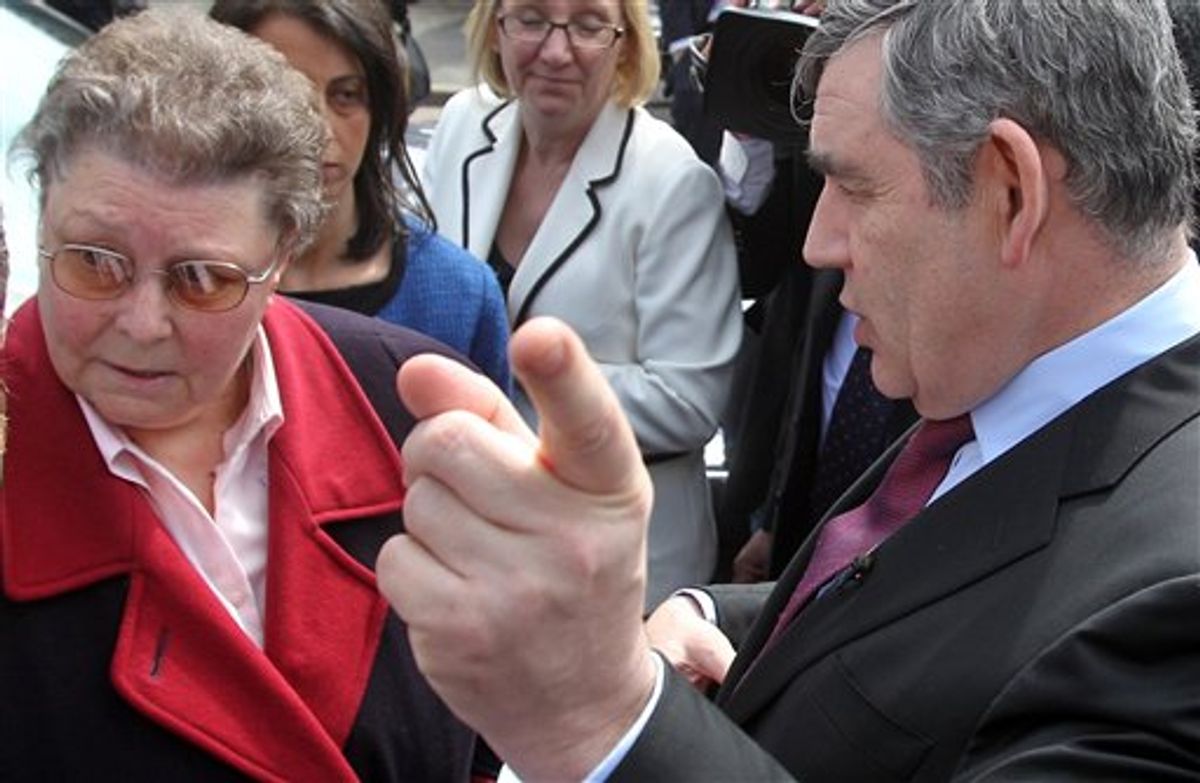 Britain's Prime Minister Gordon Brown, wearing a Sky News microphone, speaks to local resident Gillian Duffy, 65, while campaigning for Britain's May 6 General Election in Rochdale, England, Wednesday April 28, 2010. Brown was caught on microphone describing a voter he had just spoken to - apparently Duffy - as a "bigoted woman". The comments were made as he got into his car, not realising that he had the microphone pinned to his jacket. He told an aide: "That was a disaster - they should never have put me with that woman. Whose idea was that? It's just ridiculous..." Asked what she had said, he replied: "Everything, she was just a bigoted woman."(AP Photo< Lewis Whyld-pa) **UNITED KINGDOM OUT: NO SALES: NO ARCHIVE:** (AP)
--

So a pensioner named Gillian Duffy asked British Prime Minister Gordon Brown about welfare cheats and "all these eastern Europeans that are coming in." He accidentally called her "bigoted" on a live microphone, and now his campaign to keep his job as British prime minister is imploding. Watching this meltdown happen, I keep wanting to feel bad for the guy, and then as soon as I let myself, I get mad at him all over again.

Immigration politics are a little different, country to country, but not that different. Here's how it breaks down in the U.K.: The Conservatives are fairly akin to America's Republican Party, as the least bashful representatives of British nationalism on the scene. Meanwhile, Britain's two left-of-center parties align with the two faces of our Democrats.

Brown's Labour Party, the traditional representative of the working class and its interests, has felt some obligation to respect anxieties about immigrants taking jobs and changing neighborhoods. But Labour has long since shed its old crusading socialist identity, and is basically a technocratic party of government. These guys run for reelection by talking about 2 percent increases on various indices, and the old connection with working-class struggles has gotten a little tenuous. In Brown's contempt for Duffy, you can hear some of New Labour's pencil-pushing hauteur.

The surging Liberal Democrats, on the other hand, are sort of the British equivalent of the cosmopolitan, less class-conscious wing of our Democratic Party, based in college towns and the cores of big cities. (I shudder to use the term, but think "wine-track.") As such, they don't really see immigration as a problem at all.

To judge Brown, it’s helpful to ask how this would play out in the U.S. Imagine if, say, Al Gore in 2000 -- a figure in some ways similar to Brown -- had been caught calling a retiree in Youngstown, Ohio, a bigot, after she complained to him about the Mexicans filling up the neighborhood. Would this imaginary Gore have been right?

There's not really any use saying no. It takes a certain amount of delusion to miss the racial animus in anti-immigration politics. Just have a look at this sneering and nonsensical ad from Alabama Republican gubernatorial candidate Tim James, in which he complains about multilingual driver’s license exams. Or give a moment's thought to the fact that a real candidate for office actually proposed "micro-chipping" undocumented workers. Besides, despite our disturbingly common willingness to write off Latinos and black people as not "real" members of the working class, their problems also count as the problems of working families.

At the same time, though, blaming Duffy, or her hypothetical American equivalent, does sort of amount to blaming the victim. Because while the racism is real, so is the grievance. Not necessarily the particular racial hostility against Mexican immigrants -- let's not try to apologize for that. But it shouldn't be so hard to understand why working people would resent a political order that seems thoroughly uninterested in doing anything about ever-growing levels of economic inequality.

Note, for example, that Brown actually had a somewhat satisfactory answer to the original question. The EU has meant that foreigners can take British jobs, but it's also meant that British people can get foreign jobs. This is nowhere near a comprehensive approach to the yawning worldwide gap between the rich and everyone else, but at least it's an attempt to deal with concerns about job loss. And it worked! The "bigot" in question was convinced. But Brown, who's absorbed endless consultant training about how he needs to be friendlier, felt compelled to halfheartedly ask about her grandchildren -- whom she had no apparent interest in discussing -- and to talk down to her, "jokingly," about her red jacket. Then he got in his car and berated her. You see what's not working here?

Now consider Arizona. The state has come in for a beating among liberals -- richly deserved -- for its new apartheid-style requirement that Latinos carry documentation with them everywhere they go. Arizona, incidentally, has been one of the places hardest hit by the collapse of the real estate market. It's a near-perfect encapsulation of the unraveling American dream: people move from the dying Rust Belt to the Southwestern desert, where rapid growth and cheap housing are supposed to guarantee their futures. Instead, they get underwater mortgages and wage stagnation, and we act surprised when they turn viciously on their Spanish-speaking neighbors.

Something's not working about the post-industrial economy, either in Britain or in the U.S. With economic growth limited to the rich few, a feeling sets in of being abandoned by haughty elites and their impenetrable institutions, among which are the free labor markets that drive immigration. And then, when they catch a glimpse of this anger, leaders like Brown don’t know what to do or say except to condemn.