With a major battle on derivatives regulation looming, the Post reports the bank may soon settle with the SEC 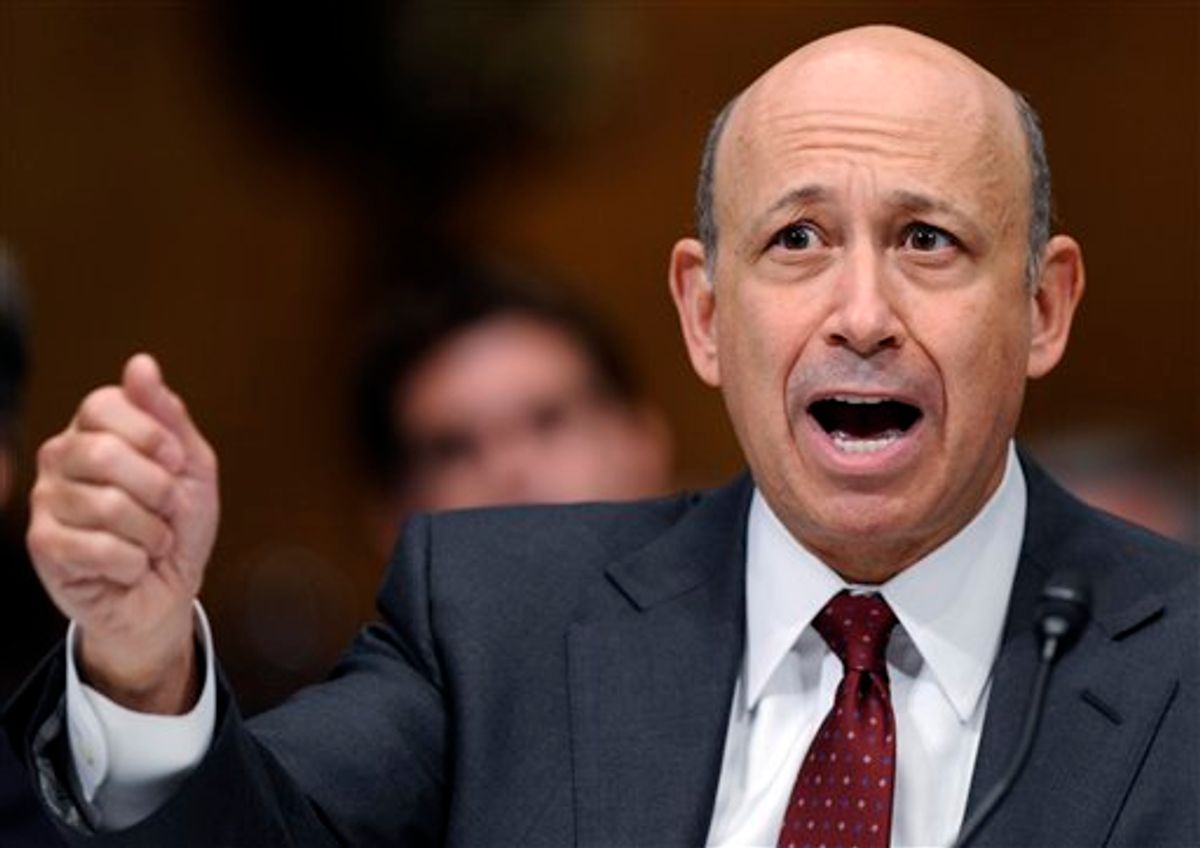 The New York Post's Mark DeCambre, citing unnamed sources, reports that Goldman Sachs "may soon settle its fraud case with the Securities and Exchange Commission, opting to end the legal fight rather than endure a repeat of the public flogging it received Tuesday in Washington..."

Felix Salmon believes DeCambre, and says now is the time to sue Goldman Sachs for losses suffered from any toxic assets pushed by the investment bank during the financial crisis. I'm not quite as confident. The last time HTWW cited DeCambre, it was in the context of his report last November, again citing anonymous sources, that JP Morgan Chase CEO Jamie Morgan was getting talked about on Wall Street as a possible replacement for Timothy Geithner as Treasury secretary. That's right -- replacing a Treasury secretary whose primary political liability is that he is seen as too close to Wall Street with an actual big bank CEO! Ludicrous.

However, as someone who watched nearly all 11 hours of the Goldman hearings on Tuesday, I am sympathetic to the notion that Lloyd Blankfein wants to make the pain go away. Those senators were just so mean! Besides, he has much larger fish to fry. The potential financial consequences for Goldman of derivatives regulation probably far outweigh what it would cost to give the SEC its pound of flesh.

The Wall Street Journal details the latest in the fight over derivatives, a struggle that will take center stage in the Senate debate over financial reform that is now set to play out over the next few weeks.

At issue is a provision in the derivatives regulation bill put forth by Sen. Blanche Lincoln, D-Ark., that would require big banks to spin off their highly profitable derivatives trading operations into separate businesses. Now known colloquially as "Section 106," the provision is anathema to the banks. For Goldman, annihilating Section 106 is probably priority No. 1. And according to the Journal, it looks like the bank has some friends in the Senate:

Goldman and other big banks have gotten the ear of New York Democratic Sen. Kirsten Gillibrand, who says she has "concerns" about a central provision in the legislation.

"The senator reiterated her support for the bill, which she voted for, but also shared these concerns," said Matt Canter, Mrs. Gillibrand's spokesman.

Sen. Gillibrand, HTWW readers will recall, made some news last week when she filed an amendment to Lincoln's bill that called for a "study" on whether the banks should spin off their trading operations rather than an outright ban. At the time, Gillibrand's office vociferously objected to my implication that Gillibrand was carrying Wall Street's water, but at this point it seems pretty clear that, on the Democratic side, the junior senator from New York will be leading the charge to get rid of Section 106.

The most interesting aspect to the Wall Street Journal's story is its implication that the hard line on derivatives is coming from the very top -- from President Obama himself.

The White House has been lukewarm on the section-106 provision. A source familiar with the White House's deliberations said the president pulled back other administration officials who wanted to work to drop it.

My guess is that, unless Obama decides to make a very big public deal on this point, Section 106 will not be incorporated in the final bill. But if Obama does go on the stump to rail about Wall Street behavior, the SEC suit against Goldman would make a very handy club to thump the financial sector with.

All the more reason to make it go away. If there's one thing a trader knows how to do, it's go for the big score.