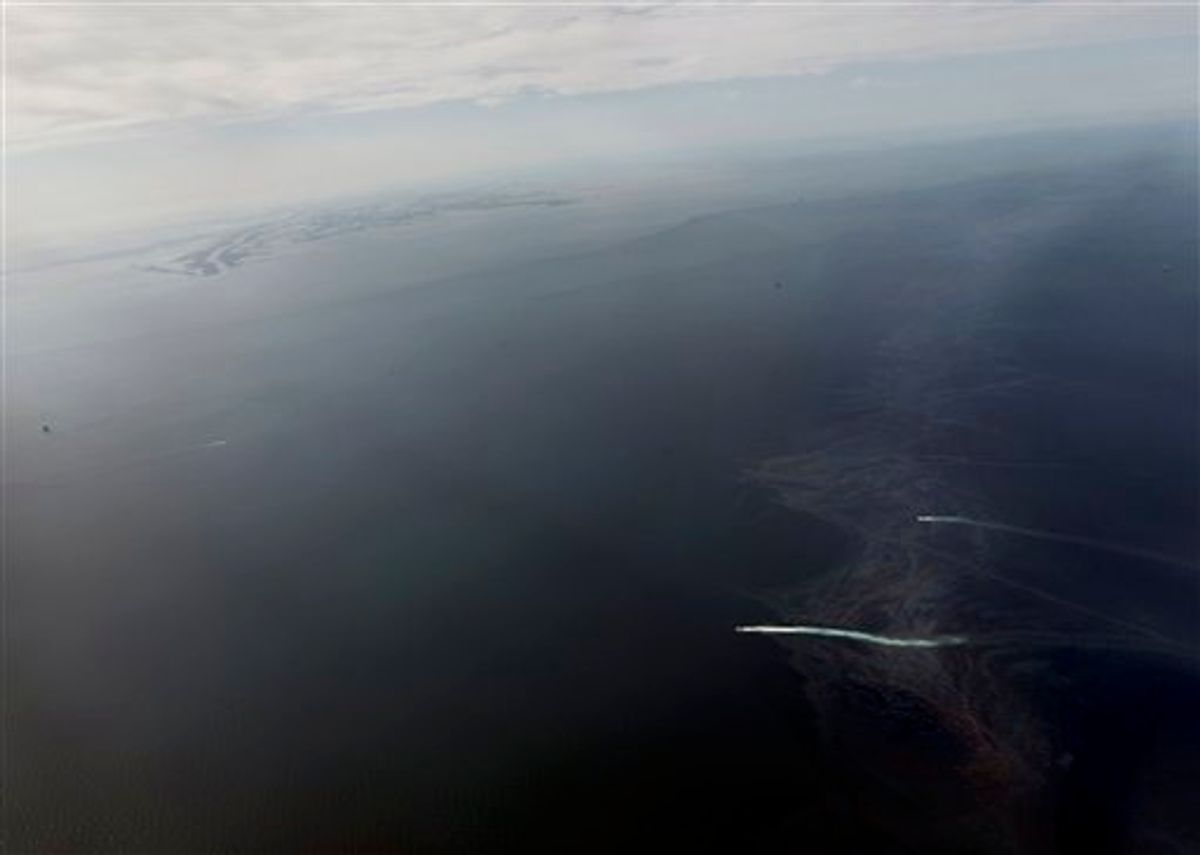 Oil, bottom right, is seen approaching the Louisiana Coast, top left, in this aerial photo taken 8 miles from shore, Wednesday, April 28, 2010. The massive oil spill in the Gulf of Mexico is even worse than believed and as the government grows concerned that the rig's operator is ill-equipped to contain it, officials are offering a military response to try to avert a massive environmental disaster along the ecologically fragile U.S. coastline.(AP Photo/Gerald Herbert) (AP)
--

The roaring explosion of Deepwater Horizon, BP's ruined Gulf Coast oil rig, has been followed by silence from politicians of both parties who were loudly assuring everyone not so long ago that offshore drilling is perfectly safe. There are no crowds screaming "Drill, baby, drill" in Florida, Mississippi or Louisiana, where people who work in the fishing and tourism industries, as well as citizens who love their beaches and wildlife, await with dread what may become a man-made catastrophe for nature.

In the days that have followed the conflagration, America has listened in vain for a comforting message about the disaster from Sarah Palin or John McCain. Nor have we heard much reassurance from President Obama, who so recently turned around to endorse offshore drilling in hopes of passing energy legislation. Meanwhile the slick grows larger, with no prospect of capping the well as thousands of barrels of oil pour from the busted pipes every day and drift toward the vulnerable coastline.

Of all the politicians and pundits who urged the nation to "Drill, baby, drill" and "Drill here, drill now," only Rush Limbaugh seems willing to venture an argument. Or rather a conspiracy theory, insinuating that terrorists decided to blow the rig to celebrate Earth Day. He doesn't seem to realize that an oil spill caused by terror would be just as devastating as a spill caused by error, and is an equally powerful reason not to drill.

But Limbaugh's self-refuting idiocies will satisfy nobody except the dimmest dittohead. (McCain once said that calling him a clown would unfairly insult both Krusty and Bozo.)

So in the absence of any new message from drilling advocates, it seems appropriate to review a few of their earlier remarks on the subject.

Nobody will ever support drilling more avidly than Palin, who instantly rejected Obama's proposal to permit ocean drilling where it has previously been prohibited. "Behind the rhetoric lie new drilling bans and leasing delays; soon to follow are burdensome new environmental regulations. Instead of 'drill, baby, drill,' the more you look into this the more you realize it's 'stall, baby, stall,'" she complained. Soon, perhaps, we will  be able to imagine how much more oil could be pumped onto the beaches and wetlands if we got rid of all those burdensome rules.

In a July 2008 campaign speech, McCain confidently blustered that even the enormous power of a hurricane would not be enough to cause a serious problem. "As for offshore drilling," he said, "it's safe enough these days that not even Hurricanes Katrina and Rita could cause significant spillage from the battered rigs off the coasts of New Orleans and Houston." He was wrong about that, too -- as was Obama when he repeated the same claim recently.

The president himself is naturally more circumspect than his old adversaries, but just as glib in portraying both environmentalists and their enemies as ideologues whose excesses he would reconcile. He promised to "balance the need to harness domestic energy resources and the need to protect America's natural resources." And he said that "we'll employ new technologies that reduce the impact of oil exploration. We'll protect areas vital to tourism, the environment and our national security. And we'll be guided not by political ideology, but by scientific evidence. That's why my administration will consider potential new areas for development in the mid and south Atlantic and the Gulf of Mexico, while studying and protecting sensitive areas in the Arctic."

If Obama honestly intends to rely on science rather than ideology or political convenience, he will soon have plenty of evidence proving that new technologies are far from fail-safe, and that the ruin of a single rig can inflict horrific consequences. Indeed, according to the industry experts, such as BP CEO Tony Hayward, the Deepwater Horizon blowout could have been far worse, if a heavier grade of oil were spilling out or if the shut-off valves failed completely.

As Palin and McCain quietly contemplate the Deepwater Horizon debacle, a few politicians in Florida already seem to have awakened to the possibility that all of their previous promises about the safety of offshore drilling may have been wrong.

Florida Senate president Dean Cannon and Florida House Speaker Mike Haridopolos, both hard-right Republicans, have long touted offshore drilling as safe enough to permit construction of rigs within three miles of their state's fragile coast. Stupid as they obviously are, Cannon and Haridopolos are  now having second thoughts, along with many other conservatives in the Sunshine State. Obama is not stupid. He's very smart. But is he smart enough to listen to Cannon and Haridopolos?