The milk for daredevils

Raw milk is thick, off-color and awfully popular -- too bad the FDA thinks it could kill you 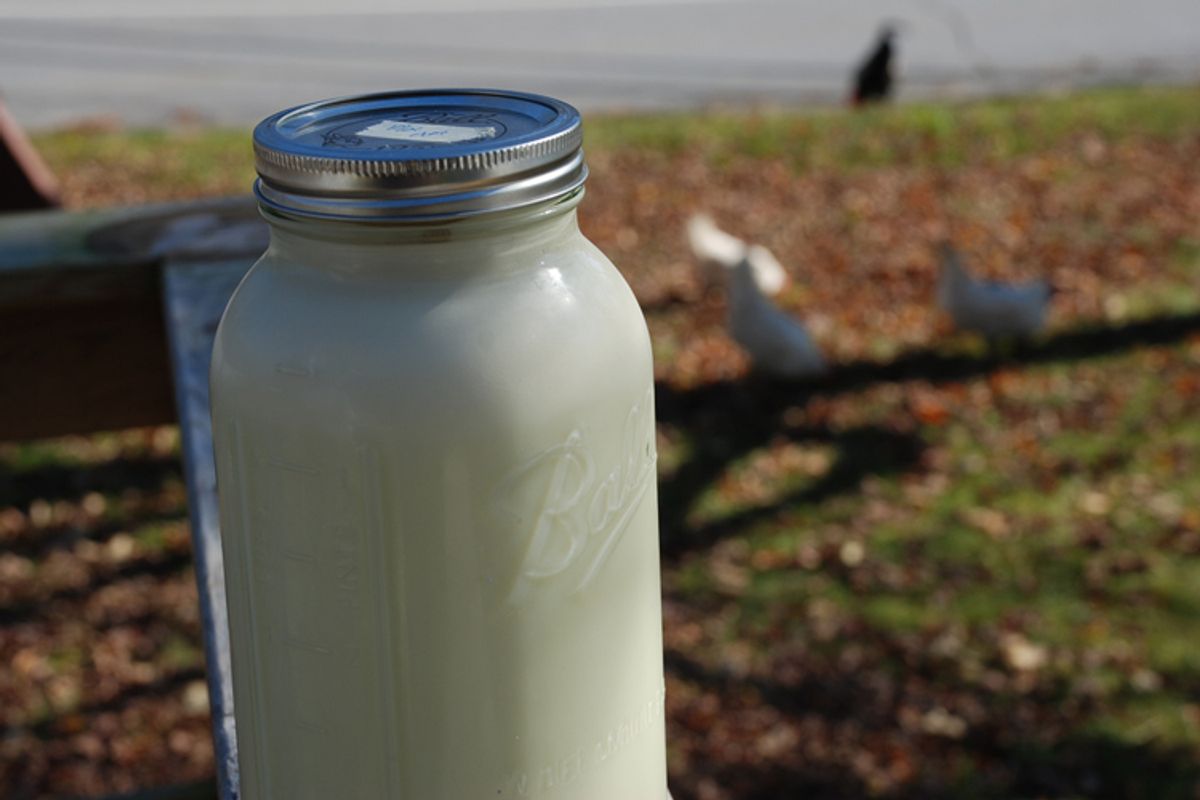 Charleston, S.C., blogger Robert Moss described it as having "a definite hay-like taste/aroma." One raw milk aficionado praised its "complexity of flavor" in the New York Times. New York magazine food critic Adam Platt bemoaned its " funky grass aftertaste" as "a little too barnyard" -- and described it as "milk you'd feed a baby seal." (Whatever that means.)

In the past few years -- and especially the past few months -- raw milk has become, despite the controversy that surrounds it, quite the trendy thing to drink. What is it? Unlike the stuff that most of us buy at the local grocery store, raw milk hasn't been pasteurized (meaning it hasn't been heated to bacteria-destroying 145 degrees). This means that, on the up side, it has a creamier consistency and exotic taste far removed from what you probably have in your fridge, and, on the down side, it has a higher likelihood of killing you.

The FDA has warned consumers that raw milk can contain bacteria, like Salmonella and E. coli, that cause "vomiting, diarrhea, abdominal pain," and, in some cases, death. But according to raw milk devotees, not only has the risk of drinking raw milk been greatly exaggerated, the supposed health benefits that come with it are enough to justify their daredevil ways. Although there's little scientific proof, raw milk proponents claim that the pasteurization process robs the milk of beneficial ingredients, like vitamins A, B12 and C, good bacteria like lactobacillus, and the arthritis-fighting compound Wulzen Facto. Many drink the milk because they believe it helps them fight specific conditions (like asthma, eczema or arthritis) or because of its healthful aura.

And then there's the texture: Raw milk is thick and creamy -- if you leave it sit, the cream will separate and float to the top -- and its color can vary depending on the time of year (from pale yellow to gold to greenish), along with its taste.

Obviously people were drinking raw milk for centuries before Louis Pasteur and Claude Bernard invented the pasteurization process in the 19th century. But they were also doing a heck of a lot more throwing up. In 1938, milk was responsible for 25 percent of food and water-related illness in the United States, but after the FDA banned the interstate sale of unpasteurized milk in 1987 that number fell to 1 percent (by 1993). Today the sale of raw milk is only legal in 28 states, each with different rules and regulations. (In Virgina, for example, the only way to get raw milk is to own a share in a cow.) A Wisconsin bill legalizing the sale of raw milk currently awaits a signature from the governor.

The pro-raw milk movement has, in some form,  existed since the advent of pasteurization. But in recent years it's turned into something more organized -- or as some have suggested, a "tea party movement" of dairy. Spurred by the rising profile of various food trends in America, including locavorism, veganism, vegetarianism, raw food and slow food, websites, like realmilk.com, have popped up to help consumers find the drink in their immediate area. New York has seen an upswing in farms permitted to sell raw milk (29 in 2010 compared to 19 three years ago). There has been a nearly 300 percent increase in permitted farms in Connecticut, and raw milk's burgeoning popularity has caught the interest of the New York Times, New York magazine, the Wall Street Journal and Grist, among many others.

According to the pro-raw milk Weston A. Price Foundation, 3 million Americans drink raw milk on a regular basis -- a good portion of whom are likely health-conscious folks who are suspicious of industrial farming and not the biggest fans of those buzzkills at the FDA. In New York, raw milk drinkers often participate in a "delivery club" in which a middleman brings in the milk from a farm (a process that is technically illegal), though the exact process for getting the milk, of course, varies from state to state. It's also worth noting that raw milk isn't exactly cheap -- New York Mag's Susan Burton paid $23 for two bottles -- so families who are scraping by probably won't be pouring raw milk over their Cheerios.

Until there's firm scientific and popular consensus on both the advantages and dangers of raw milk, it's likely to remain a niche product enjoyed by a small number of politically minded, middle-class consumers -- who don't mind a little danger to go with their cookies.