Five justices (guess which ones!) approve of crosses on public lands 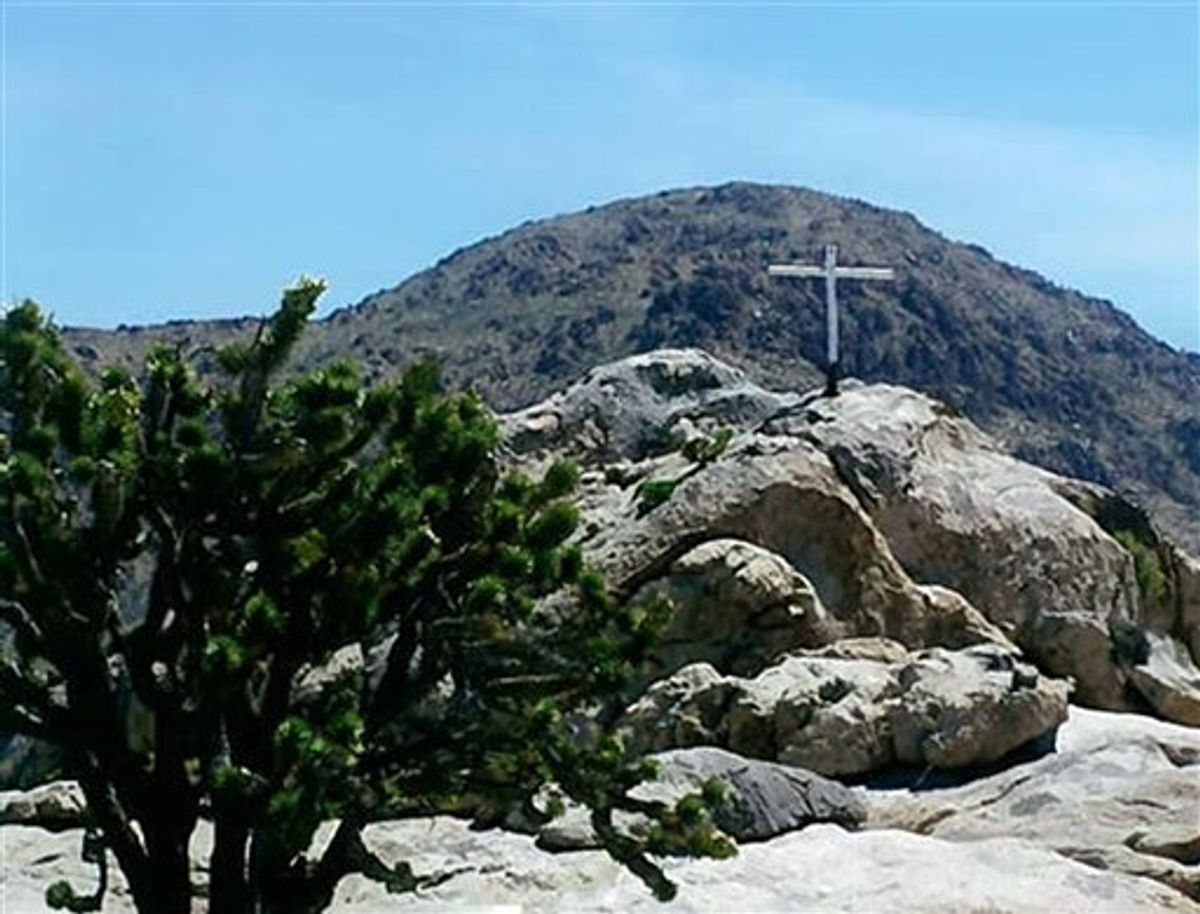 This undated photo taken by Henry and Wanda Sandoz and made available Wednesday, Oct. 7, 2009, by the Liberty Legal Institute shows the memorial known as the "Mojave Cross", on an outcrop known as Sunrise Rock in the Mojave National Preserve, in Calif. The Supreme Court has said a federal court went too far in ordering the removal of a congressionally endorsed war memorial cross from its longtime home in California. (AP Photo/Liberty Legal Institute, Henry and Wanda Sandoz) NO SALES (AP)
--

Are you currently on or near public land? A national park or wildlife refuge or something? Quick, go make yourself a giant pentagram out of whatever you have handy (goat skeleton?) and stick it on a hill or in a field or right in a Northern Spotted Owl's nest or something. The Supreme Court just gave you the go-ahead!

Easily-swayed swing Justice Anthony Kennedy joined the court's radical activist wing in overturning a lower court's decision that a cross be removed from federal land in the Mojave National Preserve. As usual, his reward was a piece of candy (Werther's Original) and the privilege of writing the opinion. (Clarence Thomas and Antonin Scalia wrote their own opinion that will probably terrify you.)

The cross was "originally" erected in the 1930s by World War I veterans, but the current cross is actually some pipes that a non-WWI veteran put up in 1988, presumably just to cause trouble. After federal courts agreed with a parks employee that the cross was unconstitutional, Congress called the site a national memorial and engineered a weird land-swap that courts also struck down. (Kennedy's decision sends the land-swap issue back to the lower court.)

Among the groups who filed briefs arguing for the removal of the cross: the American Muslim Armed Forces and Veterans Affairs Council, the Muslim American Veterans Association, Jewish War Veterans of the United States of America, the American Jewish Congress, the Jewish Council for Public Affairs, and the Anti-Defamation League. So the only people who could possibly perceive this as government endorsement of one particular religion are apparently members of most of the other religions. (This was unfathomable to Catholic Justice Antonin Scalia, who didn't seem to understand that Jews, for example, do not put crosses on their graves.)

So spray-paint "BONG HITZ 4 SATAN" on that pentacle memorial, stick it on Mt. Rushmore, and get to memorializing the fallen in your own totally non-sectarian way.