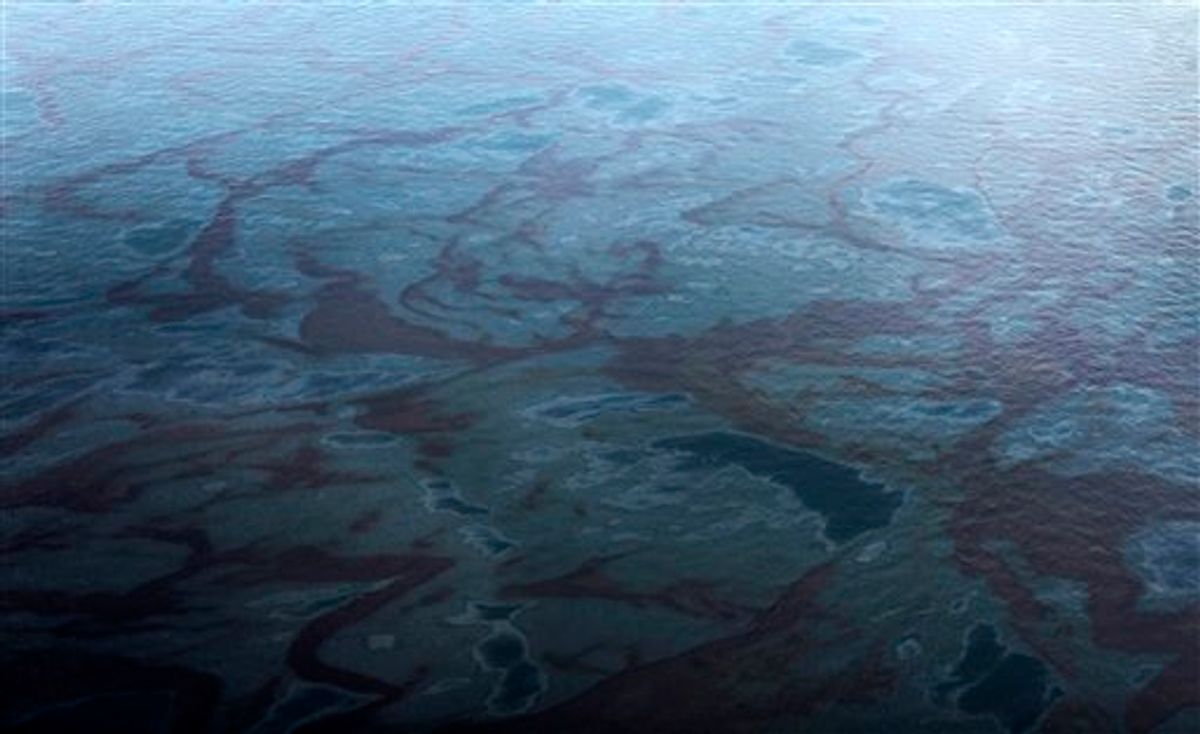 In this aerial photo taken in the Gulf of Mexico off Louisiana's tip, oil is seen near the site last week's collapse and spill of the Deepwater Horizon oil rig Wednesday, April 28, 2010. (AP Photo/Gerald Herbert) (AP)
--

A massive oil spill in the Gulf of Mexico is even worse than believed and as the government grows concerned that the rig's operator is ill-equipped to contain it, officials are offering a military response to try to avert a massive environmental disaster along the ecologically fragile U.S. coastline.

Speaking Thursday on NBC's "Today" show, an executive for BP PLC, which operated the oil rig that exploded and sank last week, said the company would welcome help from the U.S. military.

But time may be running out. Not only was a third leak discovered -- which government officials said is spewing five times as much oil into the water than originally estimated -- but it might be closer to shore than previously known, and could have oil washing up on shore by Friday.

At the same time, there appeared to be a rift developing between BP and the Coast Guard, which is overseeing the increasingly desperate operation to contain the spill and clean it up.

Coast Guard Rear Adm. Mary Landry was emphatic at a hastily called news conference late Wednesday that the new leak was discharging 5,000 barrels a day of sweet crude, not the 1,000 barrels officials had estimated for days since the Deepwater Horizons drilling rig exploded and sank 50 miles off the Louisiana Coast.

Suttles disputed at the same news conference with Landry that the amount of oil spilling into the water had ballooned -- or at the company wasn't able to handle the ongoing operation to contain it.

But early Thursday, he said on "Today" that the leak may be as high as the government's new estimate. He said there was no way to measure the flow at the seabed and estimates have to come from seeing how much oil makes it to the surface.

"Using the satellite imagery and our overflights, we can now say it looks like it's more than a thousand. It's a range," Suttles said. He said the range was up to 5,000 barrels a day.

The Secretary of Homeland Security has briefed President Barack Obama on this new information and the government has offered to have the Department of Defense use its equipment and expertise to help contain the spill and protect the U.S. coastline and wildlife, Landry said.

"It has become clear after several unsuccessful attempts to determine the cause" that agencies must supplement what's being done by the company, she said.

This all played out at the end of a long day as crews began an experiment to burn off parts of the slick -- the latest in a series of high- and low-tech efforts to stop the oil leak, reel in as much of the oil as possible to prevent it from washing ashore and harming the fragile wildlife and plant life that dot the coast.

Landry said the controlled, test burn was successful late Wednesday afternoon. BP was to set more fires after the test, but as night fell, there were no more burns. The burns were not expected to be done at night. No details about when more were planned were given during the news conference.

Crews planned to use hand-held flares to set fire to sections of the spill. They turned to the idea after failing to stop the leak at the spot where a deep water platform exploded on April 20 and later sank. Eleven workers are missing and presumed dead and more than 100 escaped the blast, the cause of which has not been determined.

A 500-foot boom was to be used to corral several thousand gallons of the thickest oil on the surface, which will then be towed to a more remote area, set on fire, and allowed to burn for about an hour.

The decision to burn some of the oil came after crews operating submersible robots failed to activate a shut-off device that would halt the flow of oil on the sea bottom 5,000 feet below.

Officials had estimated about 42,000 gallons of oil a day was leaking into the Gulf from the blown-out well drilled by the Deepwater Horizon oil rig. That would be closer to 210,000 gallons a day with the new estimates. Eleven workers are missing and presumed dead and more than 100 escaped the blast, the cause of which has not been determined.

A spokeswoman for a U.S. military base in Colorado Springs, Colo., that provides support to civil authorities during natural disasters said BP has not requested the defense department's help to contain the leak. However, the North American Aerospace Defense Command and the U.S. Northern Command at Peterson Air Force Base, were anticipating the request, said Stacey Knott.

"We are looking at how we may be able to offer support if we are asked," said Knott.

As for the burn, Greg Pollock, head of the oil spill division of the Texas General Land Office, which is providing equipment for crews in the Gulf, said he is not aware of a similar technique ever being tried off the U.S. coast. The last time crews with his agency used fire booms to burn oil was a 1995 spill on the San Jacinto River.

"When you can get oil ignited, it is an absolutely effective way of getting rid of a huge percentage of the oil," he said. "I can't overstate how important it is to get the oil off the surface of the water."

When the flames go out, Pollock said, the material that is left resembles a hardened ball of tar that can be removed from the water with nets or skimmers.

"I would say there is little threat to the environment because it won't coat an animal, and because all the volatiles have been consumed if it gets on a shore it can be simply picked up," he said.

A graphic posted by the Coast Guard and the industry task force fighting the slick showed it covering an area about 100 miles long and 45 miles across at its widest point.

"It's premature to say this is catastrophic. I will say this is very serious," Landry said earlier Wednesday.

From the air, the thickest parts of the spill resembled rust-colored tentacles of various thickness. The air was thick with the acrid smell of petroleum.

Amid several of the thicker streaks, four gray whales could be seen swimming in the oil. It was not clear if the whales were in danger.

BP says work will begin as early as Thursday to drill a relief well to relieve pressure at the blowout site, but that could take months.

Another option is a dome-like device to cover oil rising to the surface and pump it to container vessels, but that will take two weeks to put in place, BP said.

Winds and currents in the Gulf have helped crews in recent days as they try to contain the leak. The immediate threat to sandy beaches in coastal Alabama and Mississippi has eased. But the spill has moved steadily toward the mouth of the Mississippi River and the wetland areas east of the river, home to hundreds of species of wildlife and near some rich oyster grounds.

The cost of the disaster continues to rise and could easily top $1 billion.

More than two dozen vessels moved about in the heart of the slick pulling oil-sopping booms.

In Plaquemines Parish, a sliver of Louisiana that juts into the Gulf and is home to Pass a Loutre, officials hoped to deploy a fleet of volunteers in fishing boats to spread booms that could block oil from entering inlets.

"We've got oystermen and shrimpers who know this water better than anyone," Plaquemines Paris President Billy Nungesser said. "Hopefully the Coast Guard will embrace the idea."