"We are under attack by oil rig terrorists"

There are no coincidences: As news spread of a second oil rig overturning, conspiracy theories blossomed 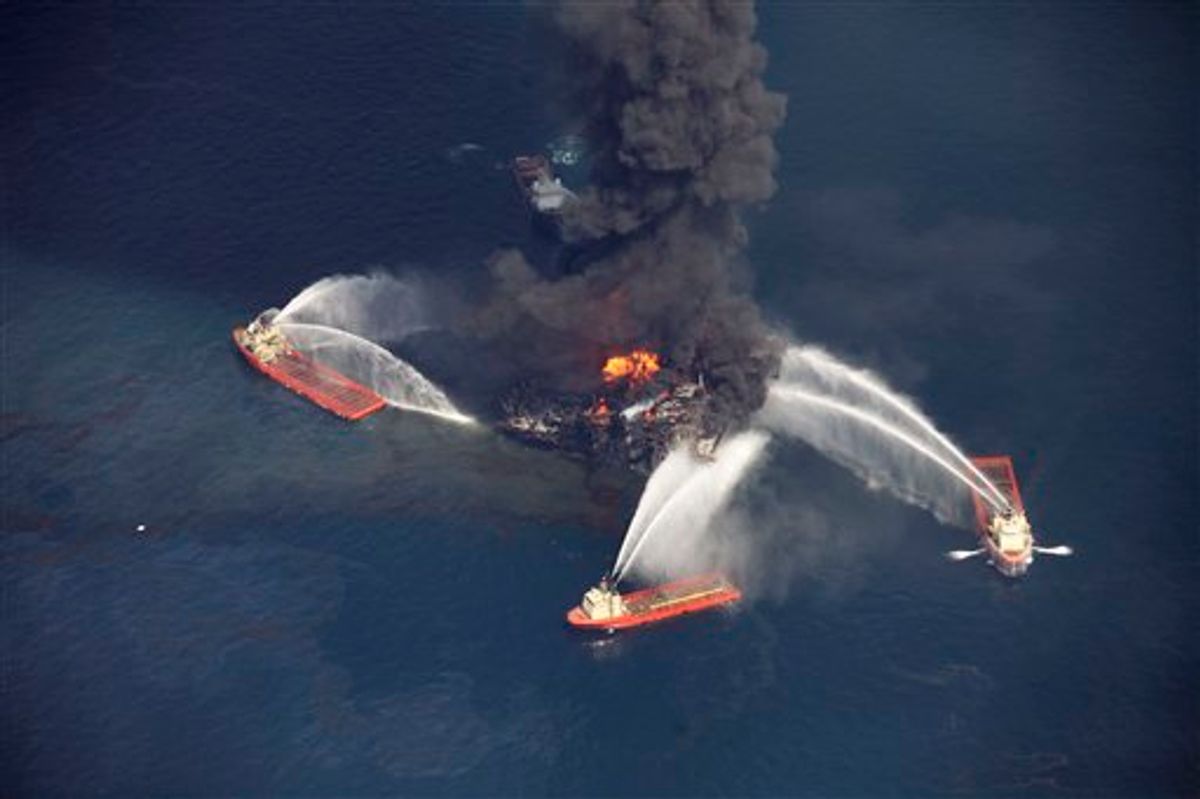 FILE - In this aerial file photo taken Wednesday, April 21, 2010 in the Gulf of Mexico, more than 50 miles southeast of Venice on Louisiana's tip, an oil slick is seen as the Deepwater Horizon oil rig burns. The oil rig, which erupted in flames March 20, 2010, and is at the center of a massive spill off the Louisiana coast, has a history of minor incidents attributed to equipment failure, human error and bad weather during its nine-year operating history, according to official records.(AP Photo/Gerald Herbert, file) (AP)
--

It's been a tough week for "drill, baby, drill" partisans. Even if they've managed to avoid getting press-ganged into scrubbing pelican feathers by Bill Maher, they're left staring disconsolately at cable TV images of a malign giant spreading oil slick, a catastrophe sure to change the debate about offshore drilling for years to come. Betrayed by the irresponsible private sector -- again!

But then came the news Friday afternoon that a second oil rig has "overturned" near Morgan City, Louisiana. Details were sketchy in the immediate aftermath of the news breaking, but who needs details?! An epidemic of dark muttering swiftly broke out in some of the more conspiratorially minded neighborhoods of the Net.

"There is no such thing as a coincidence. Something's up," declared one poster at Free Republic.

"Earth to Obama!...Do you know something you're not telling us???"

"If only one jet had flown into the WTC on 911 we would all still talking about what a tragic accident it was......"

Yes, it must be true: "The USA is under attack by oil rig destroyers." Environmental whacko saboteurs are on the loose! Can't you see? The signs of a classic Communist plot are everywhere: Destroying the ecology of the Gulf in the cause of destroying the American energy industry! Paging Michael Crichton: You were right!

OK, I admit, I took that last quote from the site Godlike Productions, which explicitly defines labels itself as "UFOs, Conspiracy Theorists, Lunatic Fringe." So maybe a grain of salt is in order. On the other hand, as any observer of American political discourse in the past few years knows all too well, the distance between the lunatic fringe and the floor of the Senate has never been shorter.

News flash from the real world: The Associated Press is now reporting that it's not clear the second rig even contains any oil or fuel -- and wasn't actively drilling.

Officials say an oil drilling rig on its way to a scrap yard has overturned in Louisiana... The rig overturned about 80 miles west-southwest of New Orleans. The Coast Guard said in a news release Friday that the drilling unit overturned in the Charenton navigational canal.

It can carry about 20,000 gallons of diesel fuel, but Coast Guard officials did not know how much fuel was on board. Coast Guard investigators say no fuel leaks have been found.

Rats. I guess we aren't under attack by oil rig eco-terrorists. But now that the theory has been broached, I'm betting it doesn't go away. After all, there are just too many unanswered questions about the Deep Water Horizon disaster.