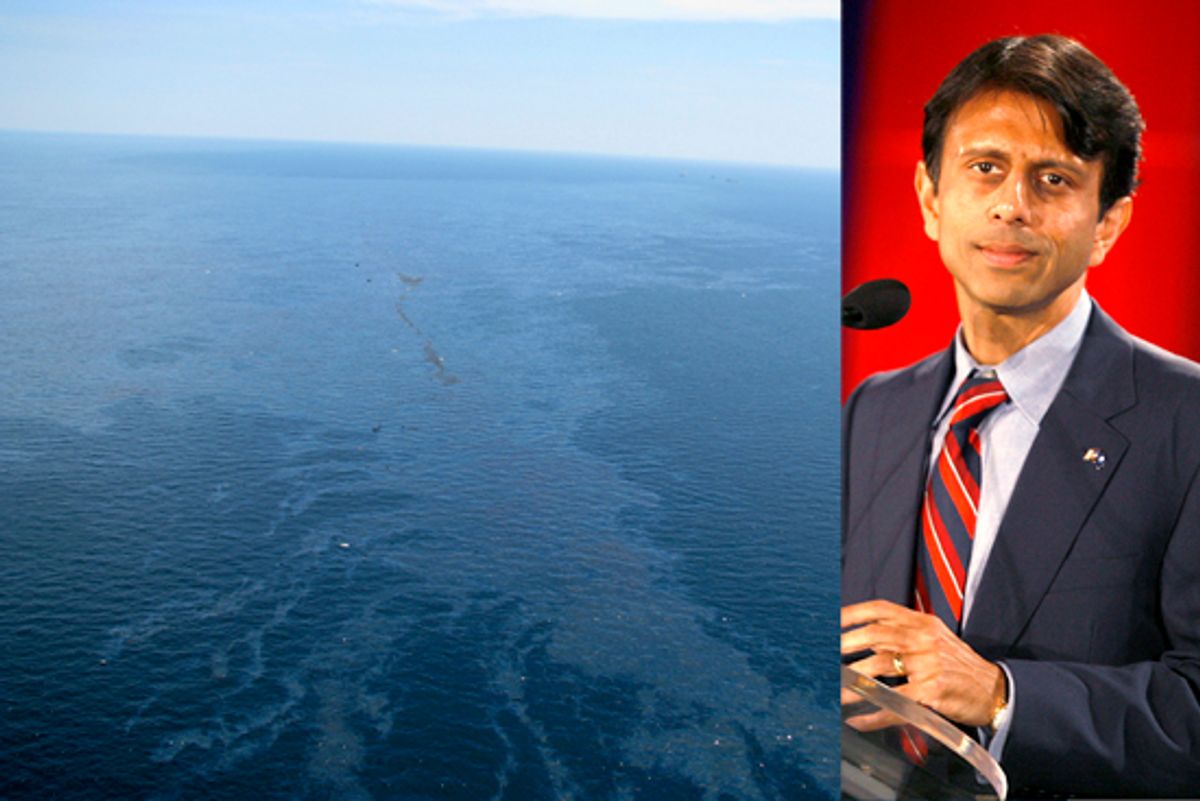 Debris and oil from the Deepwater Horizon drilling platform float in the Gulf of Mexico after the rig sank, off Louisiana in this April 22, 2010 handout photo. The oil drilling rig that had burned for 36 hours in the Gulf of Mexico sank Thursday as hopes dimmed for 11 missing workers and the risk of a major oil spill loomed, officials said. REUTERS/U.S. Coast Guard/Handout (UNITED STATES - Tags: DISASTER ENERGY) FOR EDITORIAL USE ONLY. NOT FOR SALE FOR MARKETING OR ADVERTISING CAMPAIGNS (Â© Ho New / Reuters)
--

There's nothing like a good old-fashioned disaster hitting you right in the pocketbook to make you rethink your opposition to government assistance. Remember when Louisiana Governor Bobby Jindal briefly became a right-wing hero for threatening to refuse stimulus money that would boost unemployment payments? He even made criticism of the stimulus the keynote of his response to President Obama's first congressional address.

This week, Jindal is singing a different tune. As one of the greatest oil spills in U.S. history starts lapping at the shores of Louisiana, Gulf shrimpers and oyster fisheries are shutting down shop -- possibly for months. The total cost to Gulf state economies could run into the billions. So Jindal wants help.

Gov. Bobby Jindal of Louisiana declared a state of emergency and mobilized the Louisiana National Guard to participate in response efforts.

On Friday, he also requested federal assistance for state fishermen, asking the Secretary of Commerce to declare a commercial fisheries failure.

The parallels are obvious. After Wall Street broke the U.S. economy -- call it a "financial sector failure" -- Obama pushed through a stimulus bill aimed at jump-starting demand and providing assistance to the millions of Americans who lost their jobs and homes as a result of the financial crisis. This week, after BP broke the Gulf economy, Jindal is seeking aid for citizens of his own state. It's always a different story when your own ox is the one getting gored.

Ryan Avent observed at FreeExchange this morning that it's uncanny how events have conspired to dramatize the necessity for reform in several different domains during the Obama administration. Healthcare reform was all but dead until Anthem Blue Cross announced a 40 percent premium hike. The SEC's suit alleging Goldman Sachs committed securities fraud helped propel banking reform forward. Arizona's outrageous immigration law has put immigration reform on the front burner. And West Virginia's coal disaster and the BP oil spill are stark reminders of the drawbacks to over-reliance on fossil fuels.

In each instance, the case for government action is bolstered, not by any nanny-state desire "to increase dependence" but because consecutive disasters underline the very reason we have government in the first place. I'd like to think catastrophe wasn't necessary for policy progress, but I'm beginning to be convinced that humans just aren't wired any other way.