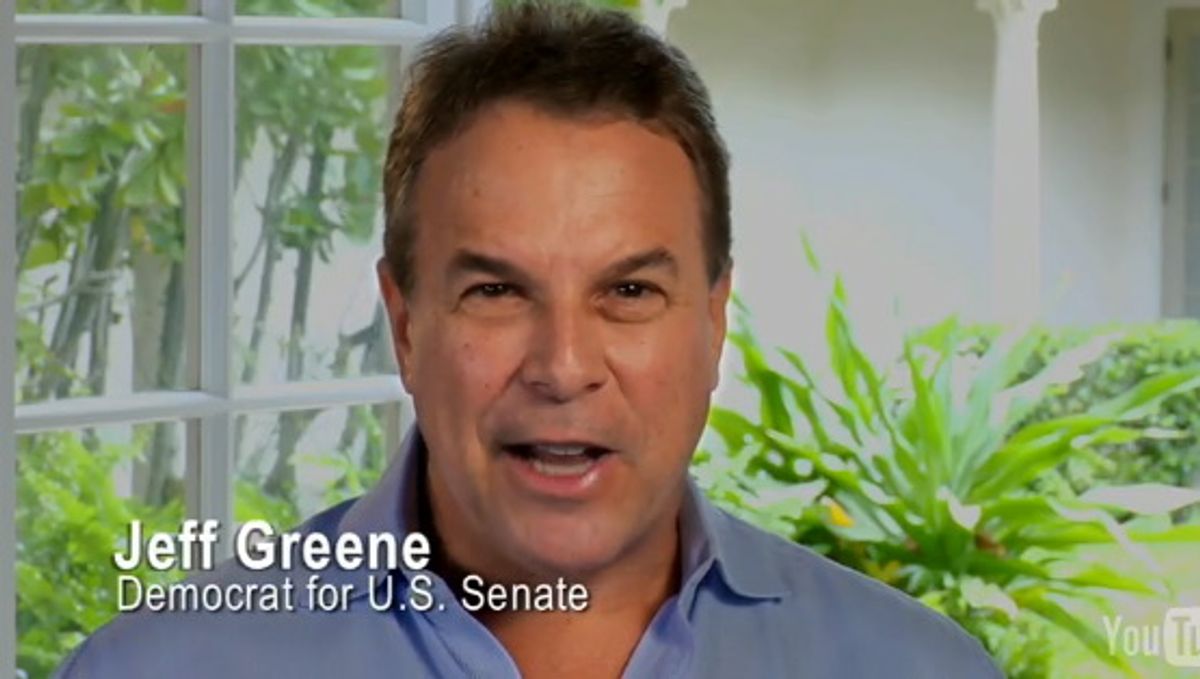 I don't know too much about Jeff Greene, so I probably shouldn't just call him a douchebag. But initial signs are really not promising. Greene is the newest entrant into the weirder-by-the-day Florida Senate race and the basic deal is that he's a billionaire, thanks to an extraordinarily lucrative bet against the real estate market, made at exactly the right time. To be specific, Greene hauled in $800 million over 18 months. Just what Florida needs, while it's still reeling from its housing hangover, right? It would almost be poetry -- some ultra-rich schmuck who profited immensely off the state’s misery, chosen as its designated representative.

On last night’s "30 Rock," Alec Baldwin's character, the smooth executive Jack Donaghy, told a story about how his mentor in business had taught him how to make love on a pile of money without getting paper cuts. I mention it because you get the sense from Greene that this is the kind of thing he practices.

In late 2008, Forbes profiled the newly-minted member of its 400 list. The interview was conducted, naturally, on his 145-foot yacht, docked in the Hamptons. Greene was "tan and wearing white shorts and a polo shirt the color of money."

From the yacht's highest deck, on a cloudless summer day, the other, far smaller pleasure craft anchored nearby look like toy boats bobbing in a bathtub. When Greene is not sailing he bounces between five homes, including a 63,000-square-foot one in Beverly Hills, Calif. Greene dubbed the mansion Palazzo di Amore prior to using it last year to host his $1 million wedding, which the 53-year-old is quick to point out was his first.

I figure you've got the picture by now, but I'm not done. Greene appears to have used his wealth to buy a whole bunch of really famous friends: Mike Tyson, for example, was his best man. Hollywood madam Heidi Fleiss crashed at his pad for a while after getting out of the joint. He was involved in a nasty lawsuit with Ron Howard.

"I got into real estate very much by accident," Greene told the Forbes reporter. "But I've never had more fun than now." I’d say this guy gives new meaning to the term "gauche new money," but he doesn't, because those words are clearly inadequate to describe him. Maybe the Russians have some term for this.

Anyhow, Greene is now in the Democratic primary, and already, like, one day into his new career, is producing stuff that seems to defy us to label it a cynical cliché. Says a campaign video, "I am an outsider, the only candidate who isn't a career politician. I've succeeded in the real world of hard work -- the others have only succeeded at running for political office after office." I wonder if he'll give that speech from on top of his yacht, or possibly at the Palazzo di Amore.

Greene is running against Rep. Kendrick Meek, who by all accounts is a decent, hard-working congressman who has caught a pretty bad series of breaks. He's giving up a House safe seat to run statewide in a really tough year for his party, and endless odd machinations mean that the guy can't get any attention. First Charlie Crist got into the race, and everyone wrote it off as an automatic Democratic loss; how could a no-name like Meek compete with a popular, moderate governor? Then Marco Rubio came along and detonated Crist’s chances in the GOP primary. Now Crist is running as an independent. The dramatic split in the GOP might actually help Meek's chances in the long term -- he'll only need 35 or 40 percent of the vote to win. But it sure isn't getting his name in the news much at the moment.

That's assuming, of course, that Meek actually will be the nominee. But I wouldn't bet on Greene, who is an attack ad waiting to happen. In fact, I'll confess to a certain amount of pleasure in seeing him in this race so far, because he's already getting took. It's a classic story, and it plays out every two years somewhere: some arrogant corporate pirate decides his wealth has earned him a place in Washington, and immediately attracts parasite consultants who smell blood. They whisper sweet nothings in his ear about how the public really wants "an outsider, [a] candidate who isn’t a career politician," and all he needs to do is make some massive out-of-pocket advertisement buys, from which, incidentally, they take a percentage cut. Greene probably won't win the nomination, and definitely not the general election, but his advisers, Joe Trippi and Doug Schoen, are going to win no matter what.