As the oil slick reaches our shores and a second rig goes under, the former Alaska governor blogs about drilling 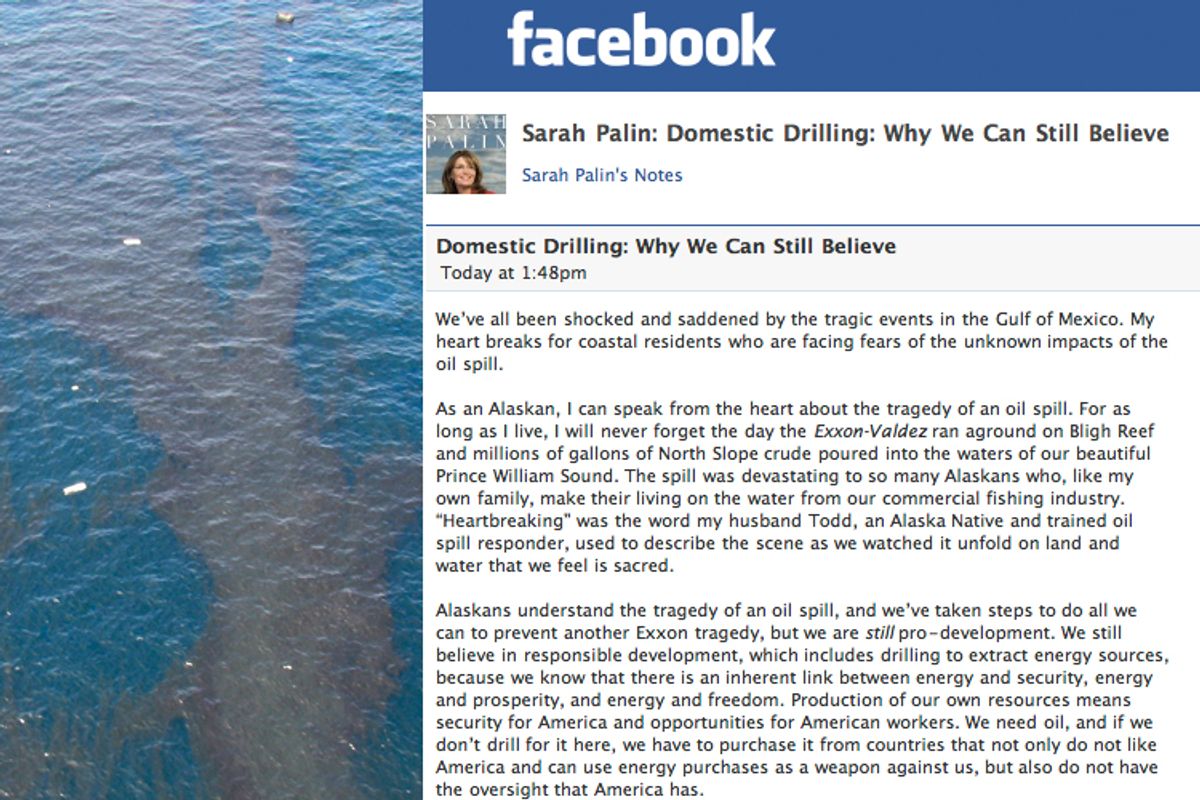 At almost the exact moment that Reuters broke the news (on Twitter) that a second oil drilling rig had overturned off the coast of Louisiana, Sarah Palin posted her latest Facebook "note." The headline: "Domestic Drilling: Why We Can Still Believe."

5,000 barrels of oil are already leaking into the Gulf of Mexico every day. The massive and growing oil slick is reaching the shores of Louisiana and it's scheduled to touch Alabama this weekend. And now  the coast guard confirms that a "mobile inland drilling unit" near Morgan City, Louisiana overturned today.

This all says one thing to the former Governor of Alaska: accidents happen, but we must continue to drill.

Alaskans understand the tragedy of an oil spill, and we've taken steps to do all we can to prevent another Exxon tragedy, but we are still pro-development. We still believe in responsible development, which includes drilling to extract energy sources, because we know that there is an inherent link between energy and security, energy and prosperity, and energy and freedom. Production of our own resources means security for America and opportunities for American workers. We need oil, and if we don't drill for it here, we have to purchase it from countries that not only do not like America and can use energy purchases as a weapon against us, but also do not have the oversight that America has.

"No human endeavor is ever without risk," Palin's ghostwriter adds later, comparing dangerous and pointless off-shore domestic drilling to the moon landing.

Between the West Virginia mine disaster and this horrific oil spill, it is a bad time to be an advocate for any of the traditional conservative energy proposals. (If, like celebrity deaths, these things happen in threes, I advise you to avoid nuclear power plants for the time being.)