In defense of Muslim women's choice

I've seen first-hand how the veil is used to control women, and Europe's battle over the burqa is no different 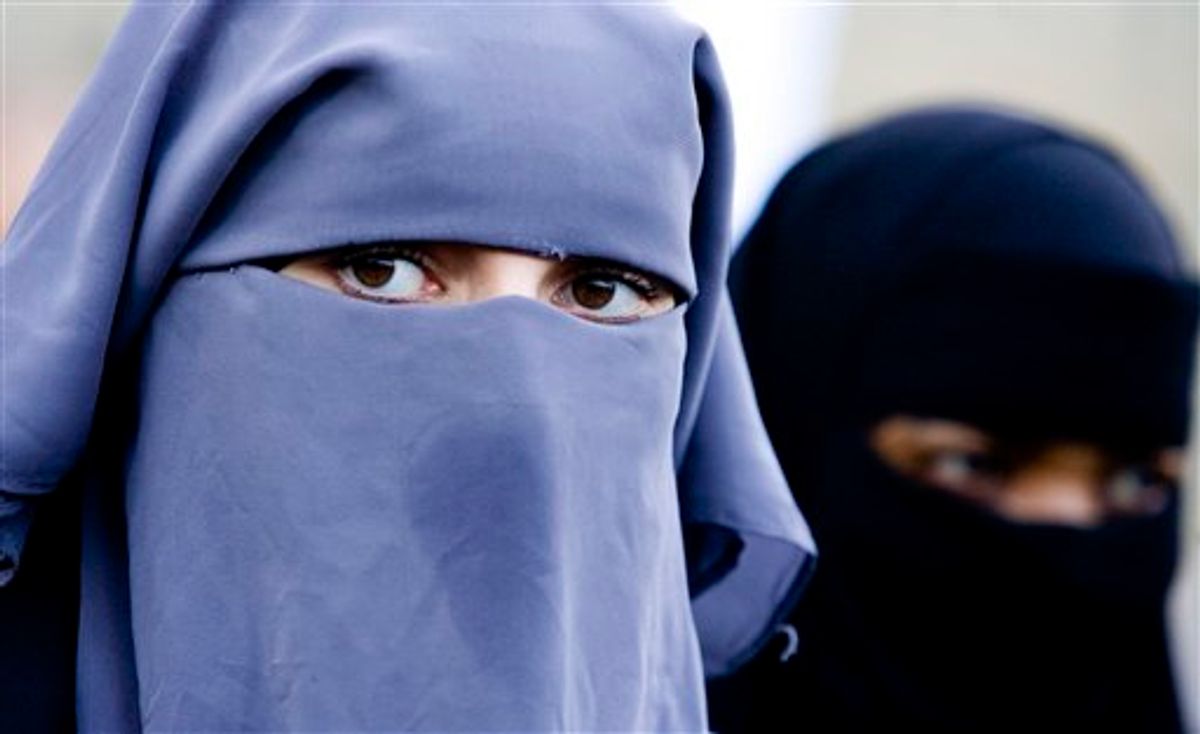 File - In this Nov. 30, 2006 file photo unidentified women are seen wearing a niqab in The Hague, Netherlands. A parliamentary committee in Belgium on Wednesday March 31, 2010, has unanimously voted to ban the wearing of full face-covering veils in public, a major step in the country's legislative process. The full House of Representatives is now expected to vote on the issue late April. (AP Photo/ Fred Ernst, File) (AP)
--

When my mother turned 12, she started wearing a burqa in her hometown of Multan, Pakistan. More than a decade later, she got married and moved to Karachi, then a thriving capital of modernity, where few women wore hijabs, let alone all-encompassing veils.

Growing up in Central Valley, Calif., I had no qualms about showing off my legs in shorts and skirts, and I was shocked to learn my mother had covered every inch of her body. Even more unbelievable to me, though, was that my mother felt pressured when she moved to Karachi to suddenly give up the burqa, a blanket of fabric that had at that point been part of her identity for more than half her life. It provided her with a sense of comfort, it helped define her identity as a Muslim and a woman, and it was gone virtually overnight.

It angered me that she hadn’t protested. What had she wanted to do, I asked her. “It doesn’t matter,” she told me. “We must do what we can to fit in our community.”

That is the crux of the problem I see today in Europe’s current battle over the veil: Communities defining how women should cover up or what they should take off. Just yesterday, the lower house of Belgium's parliament voted to ban the full-face veil in public. Last week, French President Nicolas Sarkozy called for a bill that would do the same -- all in the name of women’s rights. According to Sarkozy, the veil “threatens the dignity of women.” What about the dignity of choice?

Religion ultimately became a very private affair for my mother. Not personal, but private -- so much so that I suspect there was a great disconnection between what she truly felt and believed, and the appearance she put on for others. She never went back to wearing the burqa after she got married, and for as long as I can remember, she only wore a veil in religious ceremonies. In Multan, she donned a burqa; in Karachi, she took it off; and in the United States, she took to wearing pants and T-shirts. Like most migrants, she caved to the pressure to fit in.

Of course, it makes me mad that women are forced to cover their heads in Iran or Saudi Arabia. In those cases, it isn’t a symbol of religion; it’s a symbol of patriarchy. It makes me just as angry, though, to see a veil ban imposed on women in the name of modernity and liberalism. Mullahs and governments are both guilty of attempting to unilaterally define what empowerment means for women.

I grew up on the opposite side of the world as my mother, but still encountered similar pressures to conform. It was difficult as a teenager to balance the modesty that Islam encourages with the latest fashion trends. I paraded in dresses and short sleeves throughout high school, much to the chagrin of my mother who was disappointed but never told me how to dress. As I grew older, I started reading feminist literature and chatting with like-minded female friends. I found that being a feminist was often equated with being free of the "restrictions" of religion. "Covering up" in particular was taken as de facto proof of oppression, which I knew to be a untrue based on my personal experience with modestly-dressed Muslim women who were outspoken, opinionated, and politically and socially liberal.

I believe the way Islam has been defined in certain contexts has oppressed women, and I disagree with anyone ever being forced to veil. But it isn’t the religious basis for covering up that matters most, it’s a woman’s right to choose whether to cover up because of religion. Religion is her personal domain and she should be able to navigate that realm on her own terms.