GOP's past gives the lie to "colorblind" claims

Republicans claim Arizona's new immigration law has nothing to do with racial profiling. Oh please 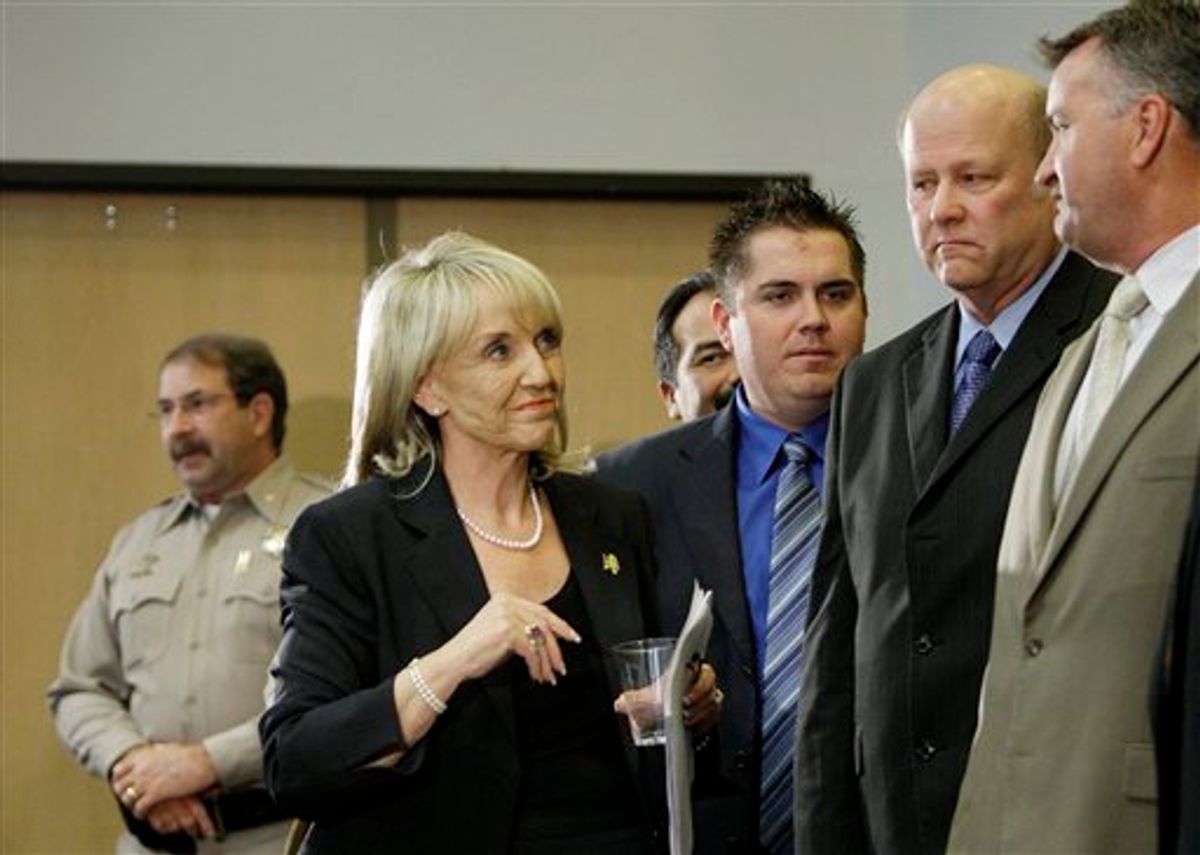 Arizona Gov. Jan Brewer walks past law enforcement members after she signed immigration bill SB1070 into law Friday, April 23, 2010, in Phoenix. The sweeping measure would make it a crime under state law to be in the country illegally, and would require local law enforcement to question people about their immigration status if there is reason to suspect they are in the country illegally. (AP Photo/Ross D. Franklin) (AP)
--

Upon signing Arizona's new statute requiring police officers to demand citizenship papers from anyone they believe is in the country illegally, Republican Gov. Jan Brewer last week claimed that the bill is not designed to "tolerate racial discrimination or racial profiling" of Latinos.

Responding to critics who say the legislation does just that, she, like many other conservatives, insisted, "I don't know what an illegal immigrant looks like" — the implication being that Republicans are colorblind.

It sounds reassuring, but methinks she doth protest too much, and I say that because one of the Republican Party's leading law enforcement voices has already disclosed the true objective of precisely this kind of legislation.

That seminal admission came in November 2001, when the emotional aftermath of 9/11 momentarily removed politicians' rhetorical filters. There on the floor of Congress, GOP Rep. Scott McInnis delivered an address about "the need for profiling for the national security of this country."

"Insurance companies profile for risk. That is what I am asking that we continue to do — we need to profile for risk," he thundered, adding that using ethnicity as a risk factor "is very legitimate — I think it is smart."

In other words, we should do to civil rights what insurance firms have done to, say, healthcare — namely, deny people rights and privileges based on their ascribed characteristics.

Had McInnis' career been buried in the political graveyard, Republican apologists could easily pretend his kind of bigotry is irrelevant to today’s fears that the Arizona law will both encourage prejudice and appear in other states. But McInnis is now the Republican gubernatorial front-runner in Colorado, and this week he became the first major GOP candidate in America to pledge to replicate Arizona's statute in his state if elected in 2010.

Considering the candidate's pedigree as a former state House majority leader and six-term congressman, and considering his views on what a law like Arizona's is really all about, McInnis' promise is not an inconsequential outburst from some nobody, nor is it likely to be an isolated campaign plank in an unimportant backwater. On the contrary, this is a far-reaching signal from the national Republican Party establishment, for it comes from that establishment's hand-picked poster boy in a state that GOP guru Karl Rove said will be "ground zero" in the upcoming elections.

For his part, Rove acknowledges that the Arizona law aims to let police use racial and ethnic cues to profile individuals — exactly the way McInnis envisions.

"[Police] are going to [target suspects] on the basis of reasonable suspicion that these people are here illegally," he said, "like they're driving a car with a Mexican license plate or they can't speak English" — in short, cultural metrics that even anti-immigration activist Tom Tancredo has said could unduly result in people getting "pulled over because you look like you should be pulled over."

Such constitutional atrocities, of course, don't bother the ideologically conservative Rove — instead, the reason Rove says "I wished [Arizona] hadn't passed" the bill is that it could devastate Republicans at the polls.

First and foremost a partisan animal, Rove understands that the more Republican standard-bearers like McInnis opine about Arizona's statute, and the more voters learn about those standard-bearers’ past statements, the more voters will see that the GOP is dishonestly masking institutionalized bigotry in seemingly laudable odes to racial neutrality. That revelation may invigorate the small racist vote, but Rove knows that the truth could also repulse the Silent Majority — and perhaps sink his party for good.