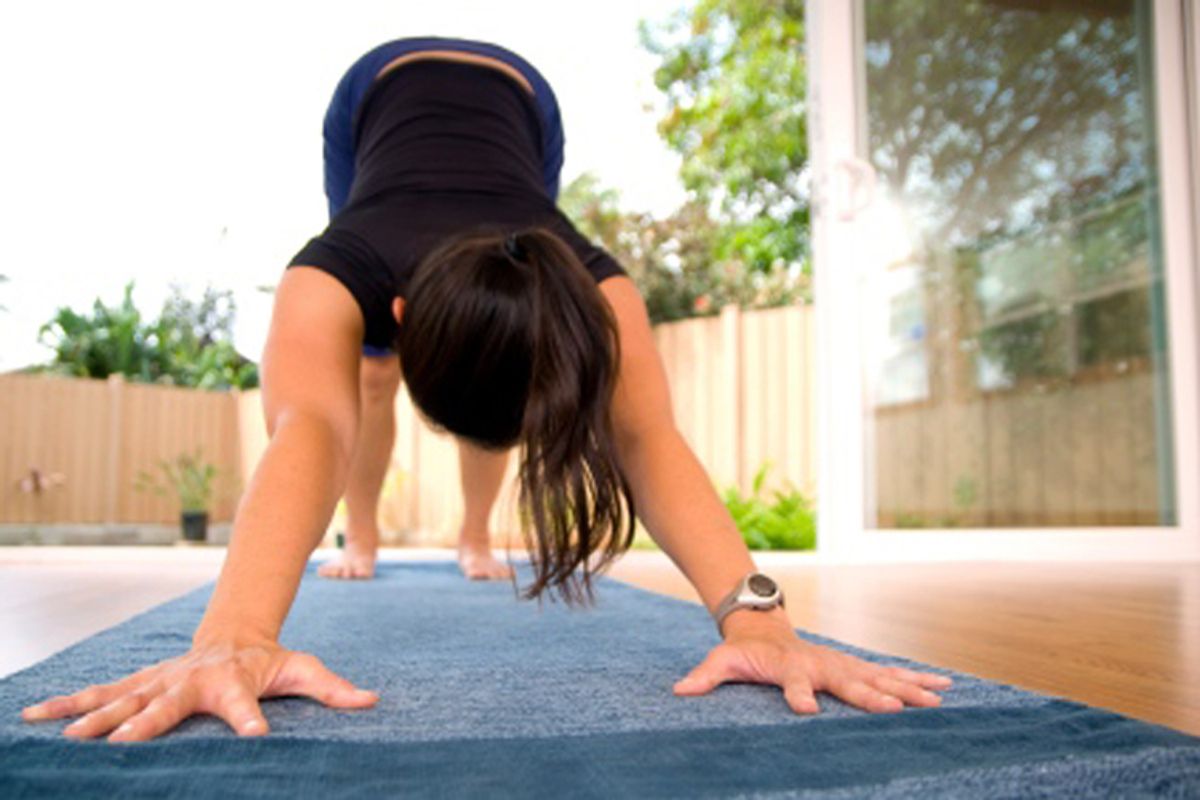 By now it's safe to say that the Great Yoga Takeover of America is complete. According to a 2008 Yoga Journal study, 15.8 million Americans engage in some form of the ancient Indian physical and meditative practice, spending almost $6 billion a year on yoga classes, mats, DVDs and exotic retreats. There’s yoga for couples, yoga for babies, yoga for dogs. (As the New York Times reported recently, there’s already a scrappy, populist yoga-for-the-people movement afoot, a backlash against the steep price tag of upward of $20 for a 70- or 90-minute class.)

But how, exactly, did yoga become so firmly entrenched in American culture? While its explosion is certainly a product of the last few decades, it still comes as a surprise -- given its massive popularity -- to find that not so long ago, yoga was considered dangerous, possibly evil, and certainly a threat to the chastity and delicate nature of American women. Yoga as home-wrecker? That's a new one.

It's all thanks to a man named Pierre Bernard, writes Robert Love, a magazine editor (Rolling Stone, Best Life) and professor at the Columbia University Graduate School of Journalism, in his fascinating new book "The Great Oom: The Improbable Birth of Yoga in America." Born Perry Baker in Leon, Iowa, in 1876, Bernard started to study yoga -- both the physical poses, and a number of mystical spiritual teachings -- in his teens, working with a Syrian Indian teacher named Sylvais Hamati. After bringing yoga to the hypnotism-, occult- and magic-obsessed 1890s San Francisco, the charismatic and controversial Bernard eventually settled in Nyack, a town up the Hudson from New York City, where he opened an ashram that drew Broadway performers, prizefighters, British spies and a number of wealthy heiresses. He was derided as a fake and a charlatan by his critics, and deemed a guru by his followers, but without Bernard, nicknamed "the Great Oom" by the New York press, we might not be heading to our Saturday morning classes today, mats under our arms, ready to practice.

Salon spoke to Love over the phone about his new book, Bernard's colorful life story and his influence on yoga today -- and what he might think about those yoga-for-dogs classes.

The story of how you came to write "The Great Oom" is a colorful and fascinating tale on its own. How did you come to learn about Bernard?

When my wife and I moved into this stone cottage overlooking the Hudson, we found mystic symbols carved into the walls: on the back of the bathroom door there was a lion-headed snake, and an ankh carved into the granite above the front door. That tipped us off that there was something unusual about the house. And then our neighbor told us about this so-called father of yoga who had operated just down the hill from where we live.

He seems like such a product of his time: 1890s to 1920s America. What was happening then that allowed Bernard to prosper and gain a following?

Bernard devoted his entire life to teaching hatha yoga in America, from the time that he was a young man in San Francisco in the 1890s to 1955, when he died. When he grew up there was a fascination with the occult: secret powers and the ability to change the material world in front of people. The perception of yoga at the time was limited to photographs and stories of Indian yogis who could do fantastic feats of asceticism, lying on the proverbial bed of nails, hanging on a hook over a fire, in some ways mortifying the body. While Bernard seemed to have a great respect for the other powers of yoga, he did deal with the esoteric and occult trappings associated with it; he gave demonstrations of trances in which needles were passed through his cheek and tongue and ears without any evidence of feeling pain. That was one of the first ways he came to the public's attention in 1898, when he gave one of these demonstrations and made the New York Times.

And the idea of these unseen powers was in the air at the time. Hypnotism was an obsession. We'd just come from inventions like the telegraph, in which invisible energy was conducted over wires; nobody knew the extent to which other marvelous invisible powers could be had.

How did he manage to change the public's perception of yoga?

At the same time that he was pitching the occult powers associated with yoga, he was also ministering to the rich and wealthy in terms of being a health guru, helping them with physical and psychological problems. He always played both sides of yoga's appeal to the public.

He was not only teaching yoga's health benefits but he was teaching it in classes, in the Tantrik Order, a secret society he started in San Francisco. It was kind of ordered on the model of the Freemasons and the theosophists, but it was a way of teaching yoga without saying the word "yoga."

The Tantrik Order was a secret society, and yet his mission was to popularize yoga. How does that make sense?

I don't think you do square it. In Bernard's life, you can kind of trace the path of yoga as it was perceived in America, from the hidden and occult view of it to the acceptance of it as a form of therapy for health. By the 1920s he'd put the Tantrik Order aside; it wasn't the main focus of his operation. When he moved up to Nyack, it was all about fresh air, cleanliness, hygiene and yoga as part of a full, well-lived life. He turned from the occult toward the idea of yoga as therapy, as sanctuary from a stressful world -- in the same way that yoga itself, or the way that we perceived it, has morphed.

Back then, yoga was actually perceived as a slippery slope to moral downfall, especially for women. Why?

It's fair to say that there was an American war against yoga in 1910 and the years afterward. Yoga had morphed from being the pastime of harmless eccentrics to something that was dangerous and subversive and possibly hurting the virtue of American women. It was based on some cases in which women gave away some amount of their fortunes to Indian swamis. In 1911, the Washington Post reported that the government was looking into this, conducting investigations. And certainly the fear that it was unleashing the sexuality of women. In the 1910s, the exoticness of it, the Orientalness of it, always came associated with loose sexuality. This wasn't American Christianity.

Bernard was arrested in 1910, at exactly the time of the passage of the Mann Act (the White-Slave Traffic Act), and charged with inveigling women into his den of sin for the purpose of sexual intercourse. He was thrown into jail in 1910 and spent the entire summer. He was released later in the year, and the charges were ultimately dropped. The entire nation was seized by this fear that there was a conspiracy of foreigners to steal American women. There were purity and vice commissions set up around the country.

What were these turn-of-the-century yogis looking for?

We think people who lived 100 years ago were not stressed out, but they were. People came to him for all kinds of medical and stress issues. He turned around people who were in trouble physically or mentally, and promised peace of mind and the ennobling of the spirit.

Today, part of what makes yoga so popular is its vague spirituality, a kind of free-floating message about acceptance and oneness. How does that connect to what he was teaching then?

What he believed was a kind of amalgamation of Hindu tantric beliefs. It was centered on worship of Shakti, the feminine power and regeneration principle. A kind of a worship of the body was at the heart of Bernard’s beliefs. Also, that all truth is sacred, that nobody really has a direct line on truth, that it’s there in Hinduism and Buddhism and Christianity. There was never any dogma attached to what Bernard taught; it was a practical spirituality that gave results -- making it very modern, related to the mind-cure movement at the time and to the New Age movement of today.

That's the thing that's wonderful about yoga. It's a step-by-step practical spiritual philosophy. He saw it that way, and that kind of hooks it up to the way we think about it. He was the guy that made yoga safe for America, and vice versa, in many ways.

Today, yoga is a spiritual and physical cure-all, a panacea for everything that ails us. And it's a huge commercial industry. There's even yoga for dogs, and babies. What do you think he'd make of what yoga has become?

Part of his influence was that he did set the stage for the commercialization of yoga. But he himself catered to the carriage trade. His life was based on an American model of the guru-student relationship; most of the people who came to the club had personal relationships with him. They weren't just students; he was their guru. I think he would've turned up his nose at the variations of yoga -- dog yoga, things like that.

Did the yoga he taught actually look like what we know of yoga today?

There are no films of it, but there are photographs of people doing the asanas that we would recognize today.

It was fascinating to see him develop in the same kind of guru vs. huckster dynamic we've seen in other controversial religious and spiritual figures who've brought Eastern spirituality to the West. In your last chapter, you ask whether he was a genius or a fraud, but you don't come down specifically on one side or another. What is your baseline feeling on Bernard?

I don't think you can call him an out-and-out fraud, or a charlatan, and I certainly think you can call him one of yoga’s pioneers in America, and also someone who cared deeply about yoga and made it his entire life's mission. Did he do things that were immoral or illegal at certain times in his life? He did. He was a rogue with a scandalous past. He wasn't a devil, and he wasn't a saint.

Besides the same physical practice, do you think the same spiritual strains are here now?

That's a hard question to answer, because what is the spirituality of yoga? There's a gauzy spirituality that yoga classes come wrapped in, but it's not a hard-edge spirituality with very much discipline besides getting to class, as far as I can tell. Yoga absolutely came from a spiritual discipline in India, so it’s not surprising that it has spiritual components; we have tended to concentrate on the physical aspects of yoga in America and seem to, only lately, be more interested in the spiritual side.

Whitney Joiner is an editor at Seventeen magazine and a frequent contributor to Salon.