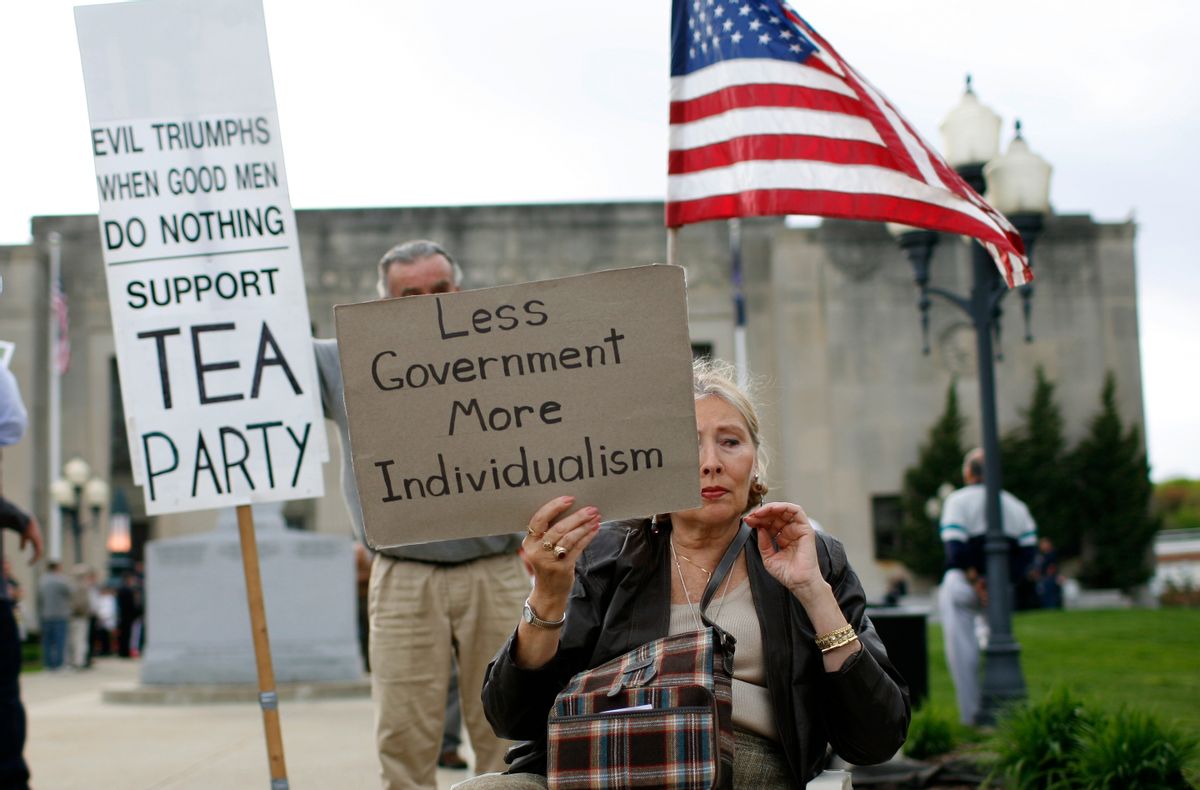 I've been getting a lot of attention from the conservative blogosphere in the last few weeks, and it's very flattering. I can't reply to it all, but I do want to take on the argument of my friend Cathy Young, the Reason magazine editor who used to write for Salon. Young took issue with my piece "The Tea Party's racial paranoia" in her last Real Clear Politics column, "Tea Partiers Racist? Not So Fast."

Examining data from a study of Tea Partiers' racial views conducted by University of Washington researchers, Young claims that in fact, the Tea Partiers' negative views of blacks aren't terribly different from the views of other whites. And where they are notably different -- especially around questions about whether black disadvantage is due to the legacy of slavery and discrimination, or blacks just not working as hard as other groups -- she writes that off to their conservatism, not racial bias. (The University of Washington professor who led the study, Christopher Parker, responds to Young here.)

She also mocks me for calling the Tea Partiers better off than other groups, based on a CBS News/New York Times poll finding that 12 percent of Tea Party members they polled made more than $250,000 a year. No big deal, Young claimed, since 11 percent of all Americans earn that much money. I wish I hung with Cathy Young; her friends must be doing very, very well: In fact, less than 2 percent of Americans earn more than $250,000 a year, according to Factcheck.org.  The Tea Party movement is in part, as I said, yet another revolt of the haves against the have-nots.

To her credit, Young does acknowledge that on the indicators of what the University of Washington researchers call "racial resentment," white Tea Partiers differ notably, not only from white Tea Party skeptics, but from all whites in the study. Young puts forward an interesting defense: That's conservatism, not racism. I'm not sure why Young seems to want to tar all conservatives, not merely the Tea Partiers, with racially blinkered views. Here, let me defend my conservative brothers and sisters: I don't think it's mere conservatism to be much more inclined than other white people to say that the prejudice white ethnics faced is comparable to that faced by African-Americans; that the legacy of slavery and discrimination has little to do with persistent black disadvantage, and that such disadvantage would be erased if blacks worked as hard as other whites.

To the extent there is overlap between Tea Partiers' views and conservative views, well, that was my original point. Another name for the Tea Party might be ... the right-wing Republican base (although they aren't as likely to be evangelical Christians as other samples of conservative Republicans). Somehow, these opponents of big government spending never grabbed their protest signs when the Bush administration was spending down the Clinton budget surplus and building a huge deficit. Somehow these anti-tax populists are finally grabbing their party hats, and their guns, because the socialist President Obama ... um, well, he actually cut taxes for 95 percent of the American people, and tax rates are at their lowest in 60 years, according to the Brookings Institution. Go figure.

The modern Republican Party owes its two generations of dominance to Richard Nixon's Southern Strategy. (Ronald Reagan actually pioneered out a California variation in his successful 1966 campaign for governor, playing on fears engendered by the Watts riots and rising anti-welfare animus). The Tea Party movement, which has mostly been embraced by mainstream Republican leaders who have no new ideas to improve the economy or make our nation safer, is a return to that tired old playbook. I don't think it can prevail again, but it can make politics uglier in the meantime. Conservatives of conscience would be better employed coming up with new ideas for their party than trying to defend the Tea Partiers' blinkered racial views.