The rise and fall (and rise?) of teen horror films

As "Nightmare" cleans up at the box office, we look at the bumpy history of the once-provocative genre 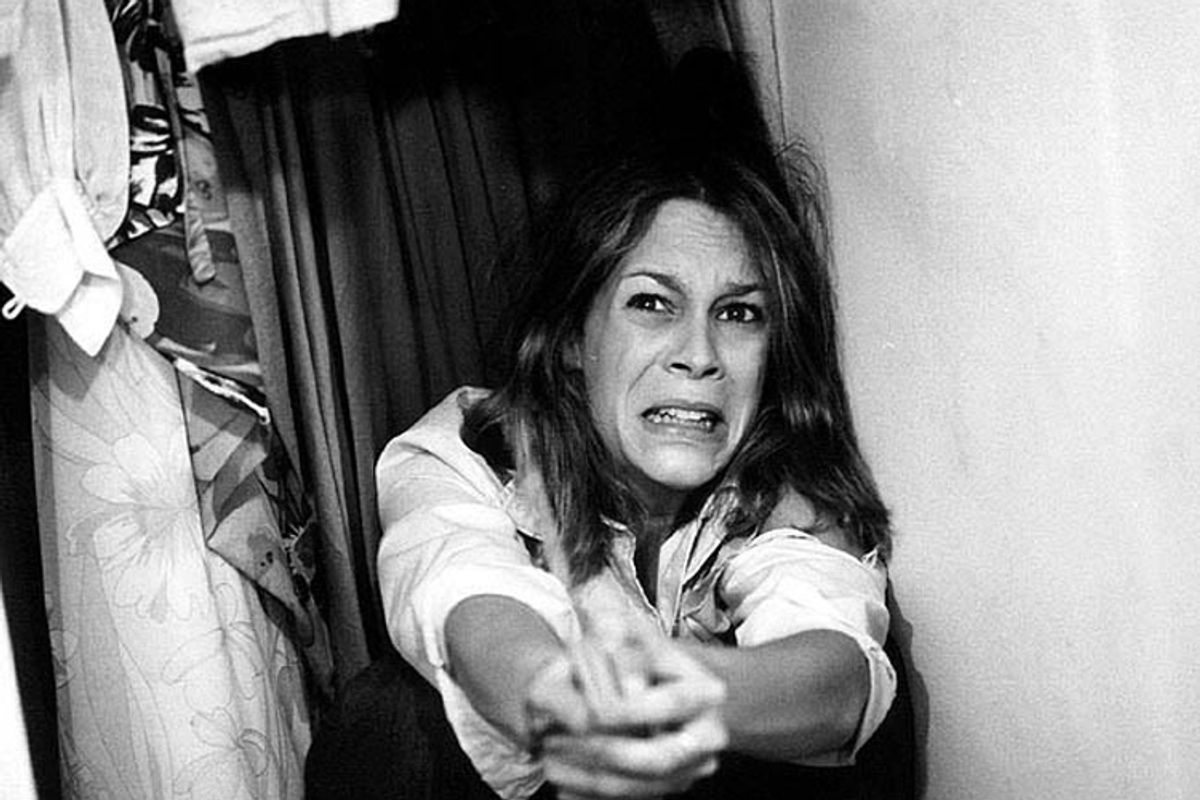 In the beloved — OK, beloved by some — 1948 comedy-horror hybrid "Abbott and Costello Meet Frankenstein," the hapless lycanthrope Larry Talbot (Lon Chaney Jr., who did hapless better than he likely wanted to) tries to explain his condition to the skeptics played by the film's titular comic team. "I know you think I'm crazy," he bleats, "but in half an hour the moon will rise, and I'll turn into a wolf."

"You and 20 million other guys," says Lou Costello's Wilbur with a smirk.

That's the sort of thing that constituted — some might say "passed for" — knowing adult humor in popular entertainment those days. Less than a decade later, after Sinatra's bobby-soxers brought the notion of adolescent hormonal activity into the mainstream, a movie calling itself "I Was a Teenage Werewolf" was hardly a surprise. Since that fairly risible 1957 Michael Landon film, the teen-horror subgenre has gone through quite a few changes of its own, growing out of its awkward phase and yielding some of the most striking work in horror, period. But then something happened. Last weekend yet another remake of yet another teen-horror classic opened and became the number one movie at the box office: "A Nightmare on Elm Street," in which the iconic bogeyman Freddy Krueger (here played by Jackie Earle Haley, the go-to guy for creep-you-out roles nowadays) troubles the already anxiety-laden dreams of your average teens by actually slaughtering the kids from within those visions. As with recent rethinks of scare fare from "The Hills Have Eyes" to "Friday the 13th" and beyond, the filmmakers' concern here seems less about artistically revitalizing the genre than with making a few bucks off a familiar brand.

In his groundbreaking late '60s book "An Illustrated History of Horror and Science Fiction Films," scholar Carlos Clarens was (rightly) dismissive of "Teenage Werewolf" and its coeval, "I Was a Teenage Frankenstein." But Clarens was presciently specific concerning the origins of those films. He cites an "unsubtle try at eliciting passive audience participation" on the part of the then-29-year-old producer Herman Cohen: "Studying the result of a poll that earmarked the age group of a high percentage … of the movie-going public as lying between 12 and 25 years, Cohen decided to adapt the well-known formulas of the horror movie to juvenile terms." Ah, it's our old friend: the demographic. As students of certain Hollywood trends understand, sometimes art can be born of what begins as market pandering — but this first wave of teen horror produced few, if any, films worth taking terribly seriously.

A concatenation of cultural circumstances that included, but wasn't limited to, the flower children, the Vietnam War and the feminist movement gave filmmakers new perspectives on teendom and young adulthood. And it gave horror moviemakers new and more provocative victims. Leatherface's prey in the legendary original "Texas Chainsaw Massacre" (1974) is a group of callow, curdled stepchildren of the Age of Aquarius. The young lambs to the slaughter in Wes Craven's original, and still grimily effective, 1974 "Last House on the Left" are tragically naive would-be hippie chicks.

Still, "Last House," and many films that came in its wake, particularly Brian De Palma's 1976 "Carrie" and John Carpenter's seminal 1978 "Halloween," seemed to do their teen characters the favor of taking them, and their circumstances, somewhat seriously. And those turned out to be films that certain critics and scholars found worth taking seriously as well. For the great critic Robin Wood, the likes of "Texas Chainsaw Massacre" and "Last House" were powerful parables of repression, while the academic Carol Clover cited pictures such as "Halloween" and "Carrie" for her "Final Girl" theory, which she developed in her book "Men, Women and Chainsaws: Gender in the Modern Horror Film."

"Halloween" spawned oodles of imitations featuring virginal heroines who became practically automatic "final girls," and soon enough the teen-horror subgenre descended into a protracted cycle of pastiche profitably lampooned by Wes Craven's 1996 "Scream" (which of course spawned its own group of sequels). So it's a little surprising to look at "Halloween" now and note just how well developed and genuinely, well, interesting its lead character, Laurie Strode (portrayed by Jamie Lee Curtis, the first and arguably the greatest of the latter-day "scream queens"), is. Neither a prude (she has no problem sharing a joint with her best pal) nor a libertine, she's witty, engaging, responsible and resourceful. Although she is, yes, virginal, she insists her lack of a social life is merely the result of being constantly busy and the fact that "guys think I'm too smart." And the film spends a good deal of time getting to know her. (Another surprise, looking at the film today, is just how relatively leisurely its pacing is; director Carpenter frequently holds shots for lengths that might be considered unconscionable in contemporary horror pictures.)

As an individual entity, "Halloween" is hardly as reactionary as its imitations would make it seem. A subsequent ostensible teen-horror classic, Wes Craven's 1984 "Nightmare on Elm Street," which spawned a franchise that the new Michael Bay-produced remake no doubt aspires to revive, cannily anticipates John Hughes' "Breakfast Club" with its dissection, as it were, of high-school clique hierarchies, then makes both nerds and jocks equal under the blade-laden hand of Freddy Krueger. The notion of a nightmare figure who can literally kill you in your sleep is the most ingeniously realized thing in the original, the dialogue of which is as faux "with it" and on-the-nose ("What's goin' on here, an orgy or something?" "Maybe a funeral, dickhead!") as that of, well, Craven's "Last House on the Left," in which an adult female grouses to her teen daughter, "I thought you were supposed to be the love generation!"

After the "Scream" pictures tried to bury traditional teen-horror tropes, 1999's "Blair Witch Project" reintroduced "Texas Chainsaw Massacre's" theme of the not-exactly-ingratiating-or-empathy-eliciting post-adolescent protagonist-victims. A few years after that, horror provocateur Eli Roth's 2002 "Cabin Fever" laughed it up at the increasingly disgusting fates of its teen would-be hedonists. Roth's subsequent "Hostel" efforts, along with the increasingly fetid films of the seemingly endless "Saw" franchise, inspired the coinage of the term "torture porn." The endlessly opportunistic one-dimensional sadism of the "Saw" films in particular made even the likes of the once-notorious "Bloodsucking Freaks" look like a near-Strindbergian tour de force of character development. Who knew that such thoroughly cardboard stand-ins for human beings were capable of spilling so much blood, in so many unusual ways? In any event, the spectacle sure gets tiresome after a while. In contrast, Roth's films are far more knowing and clever than a lot of their detractors give them credit for, but just pointing this out reminds me of what rock critic Robert Christgau once said about a post-punk group called the Dictators, who named their second album "Manifest Destiny": "Anyone smart enough to fool around with such terminology ought to be decent enough not to."

Like certain of the films in the Hannibal Lecter franchise, the pictures in the "Saw" series ask the viewers to identify not with the victims, or with would-be victims who ultimately triumph over evil, but with the killers. (Although "Saw's" Jigsaw killer, and his successors, aren't nearly so memorable as Lecter.) So it should have come as no surprise that when rocker-filmmaker Rob Zombie decided to redo Carpenter's "Halloween," and then its sequel, he made two films that take the murderous Michael Myers' point of view. Film critic Nathan Lee admiringly described Zombie's first "Halloween" picture as "a biopic, and a superb one at that." Zombie's conception of the Laurie Strode character, which comes to full fruition, as it were, in his "Halloween 2," morphs Laurie into a foul-mouthed basket case who's more or less powerless over the marauding Myers. Reactionary as the teen-horror film's "final girl" devices were and are ("mainstream horror's bullshit conservative ideology," as the Village Voice's Karina Longworth recently put it), one can't be blamed for wondering if the particular strain of quasi-nihilism that seems to have replaced those devices represents some sort of genuine improvement. What's even worse is when a film tries to play both ends against a useless middle — as in the Wes Craven-sanctioned 2009 rethink of "Last House," which not only completely lacks the "I've gotta take 10 showers now" awfulness of the original but grafts on a "final girl" thread to its storyline that's rather breathtaking in its insincerity.

And then there's the teen-horror film in which the horror is pretty much an afterthought. Yes, that's where the "Twilight" films fall, as far as I'm concerned. Sure, it's interesting the way the "Twilight" world turns the sexual-repression metaphor inherent in vampire and werewolf stories on its now abstinence-only head, but like most such blatantly obvious switcheroos, it's not quite that interesting. (And no, I haven't read the Stephenie Meyer novels on which they are based. Why do you ask?) The pictures finally play more as gothic teen romances with peripheral supernatural elements than "real" horror movies. And their schematics are as predictable as those of the Abbott and Costello monster mashes alluded to above. (Those, needless to say, weren't "real" horror movies either.) This swoony, sensitive hunk is from a family of vampires, but watch out! That huskier fella turns out to be a werewolf. Why they don't try to work in a monster sewn together from human corpses is beyond me. OK, it's really not.

One looks to Japan, and to a picture such as Kiroshi Kurosawa's original 2001 "Pulse" (middlingly remade by Hollywood in 2006 with Kristen Bell in the lead), with its mix of humanist empathy for its teen characters and an overwhelming feel of apocalyptic angst — this film's "final girl" really is final! — and wonders why more teen-horror pictures can't emulate it. The answer is depressingly simple: Most teen-horror pictures aren't directed by Kiroshi Kurosawa.