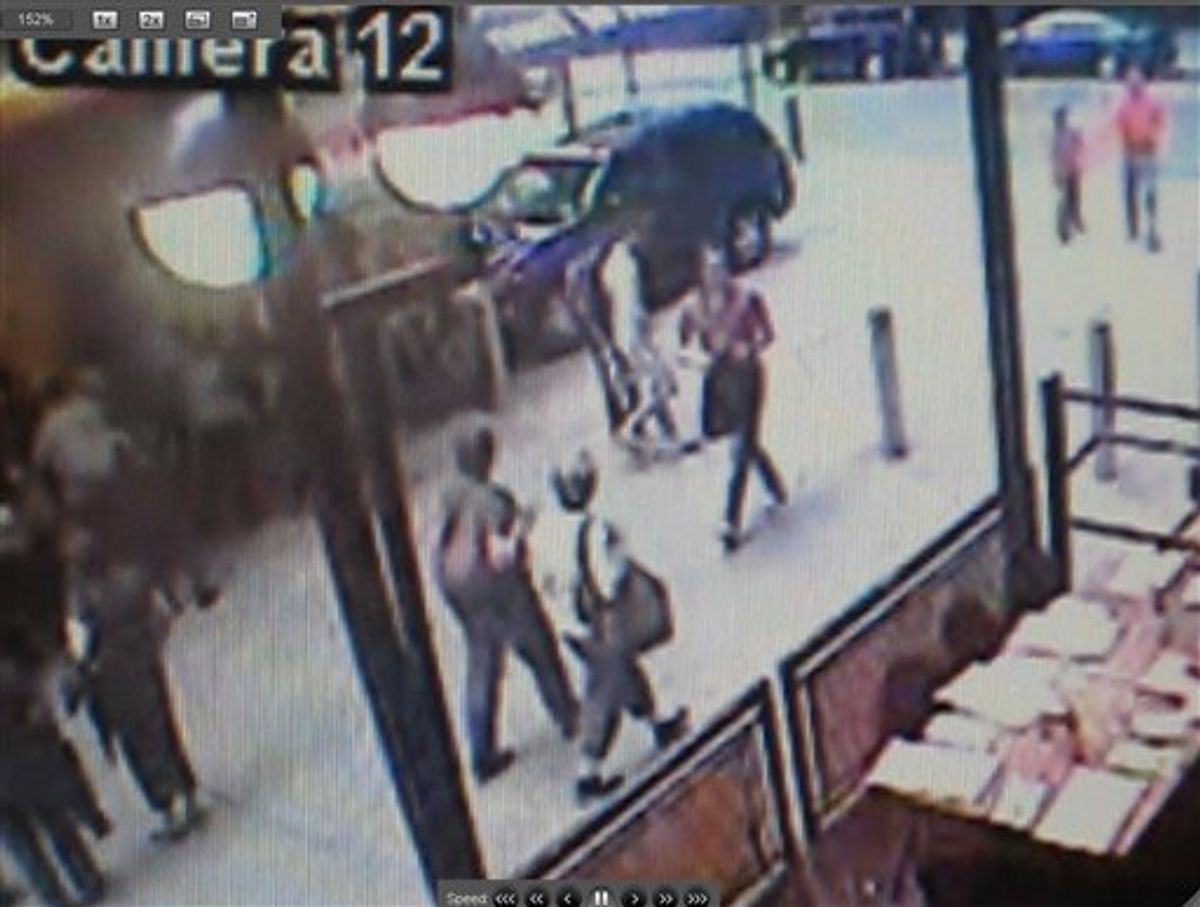 ** CORRECTS MONTH TO MAY **A frame made from a surveillance video released by the New York Police Monday May 3, 2010, shows a man, center,carying a bag and walking away after removing a shirt in an alleyway in New York. Police investigating a failed car bomb left in Times Square say the videotape tape shows a possible suspect. (AP Photo/NYPD) (AP)
--

Investigators have spoken to the registered owner of a sport utility vehicle that contained a homemade bomb in the failed Times Square terrorist attack, but he is not considered a suspect, officials said Monday.

The car was registered in Connecticut, where the owner on record was questioned Sunday night about what happened to the SUV since it was in his possession, according to law enforcement officials, who both spoke on condition of anonymity because the case is at a sensitive stage.

The man was not considered a suspect, but the officials declined to say why, or to discuss any leads stemming from the interview.

Paul Browne, the NYPD's deputy commissioner for public information, would not give further details on the registered owner but said officials were still looking for the driver.

The vehicle identification number on the 1993 dark-colored Nissan Pathfinder had been removed from the dashboard, but it was stamped on the engine and axle. Its license plates came from a car found in a Connecticut repair shop.

Investigators were also looking Monday to speak with a man in his 40s videotaped shedding his shirt near the sport utility vehicle where the bomb was found.

The surveillance video, made public late Sunday, shows the man slipping down Shubert Alley and taking off his shirt, revealing another underneath. In the same clip, looks back in the direction of the smoking vehicle and furtively puts the first shirt in a bag.

Attorney General Eric Holder said Monday that investigators have some good leads in addition to the videotape of the man. Holder said in remarks to reporters that it is too early to say whether the incident was of foreign or domestic origin or to designate it as terrorism.

Homeland Security Secretary Janet Napolitano said on NBC's "Today" show on Monday that no suspects or theories had been ruled out. "Right now, every lead has to be pursued," she said.

And investigators had not ruled out a range of possible motives. The Pakistani Taliban appeared to claim responsibility for the car bomb in three videos that surfaced after the weekend scare, monitoring groups said. New York officials said police have no evidence to support the claims.

Peter King, the top Republican on the House Homeland Security Committee, said Monday on Fox News that there was no intelligence chatter before Saturday, making a foreign connection unlikely.

The SUV was parked near offices of Viacom Inc., which owns Comedy Central. The network recently aired an episode of the animated show "South Park" that the group Revolution Muslim had complained insulted the Prophet Muhammad by depicting him in a bear costume.

Mayor Michael Bloomberg cautioned that the man on the tape may not become a suspect but urged him to come forward.

"He may or may not have been involved," he said, adding it was a hot day and he might simply have been trying to cool off.

The NYPD and FBI also were examining "hundreds of hours" of security videotape from around Times Square. They traveled to Pennsylvania for video shot by a tourist of a different person, and were evaluating the tape Monday and determining whether to make it public.

Police said the crude gasoline-and-propane bomb could have produced "a significant fireball" and sprayed shrapnel and metal parts with enough force to kill pedestrians and knock out windows. The SUV was parked on one of America's busiest streets, lined with Broadway theaters and restaurants and full of people out on a Saturday night.

The area bounced back quickly and had returned to its normal bustle on a rainy Monday morning.

Police released a photograph of the SUV as it crossed an intersection at 6:28 p.m. Saturday. A vendor pointed out the SUV to an officer about two minutes later.

The explosive device in the SUV had cheap-looking alarm clocks connected to a 16-ounce can filled with fireworks, which were apparently intended to detonate the gas cans and set the propane afire in a chain reaction, said Police Commissioner Raymond Kelly.

Investigators had feared that a final component placed in the cargo area -- a metal rifle cabinet packed a fertilizer-like substance and rigged with wires and more fireworks -- could have made the device even more devastating. Test results late Sunday showed it was indeed fertilizer, but NYPD bomb experts believe it was not a type volatile enough to explode like the ammonium nitrate grade fertilizer used in previous terror attacks, said police spokesman Paul Browne.

The exact amount of fertilizer was unknown. Police estimated the cabinet weighed 200 to 250 pounds when they pulled it from the vehicle.

Times Square, choked with taxis and people on one of the first summer-like days of the year, was shut down for 10 hours. Detectives took the stage at the end of some of Broadway shows to announce to theatergoers that they were looking for witnesses in a bombing attempt.

Bloomberg took NYPD officer Wayne Rhatigan of the mounted police force out for a steak dinner Sunday night a few blocks from the bombing attempt. Rhatigan had quickly moved tourists out of the way when he was told of the smoking SUV.

Contributing to this report were Associated Press writers Deepti Hajela, Ula Ilnytzky and Jim Fitzgerald in New York, and Pete Yost in Washington.