The Midwest's problem with immigration

Why do some of the states least affected by illegal immigration care the most about stopping it? 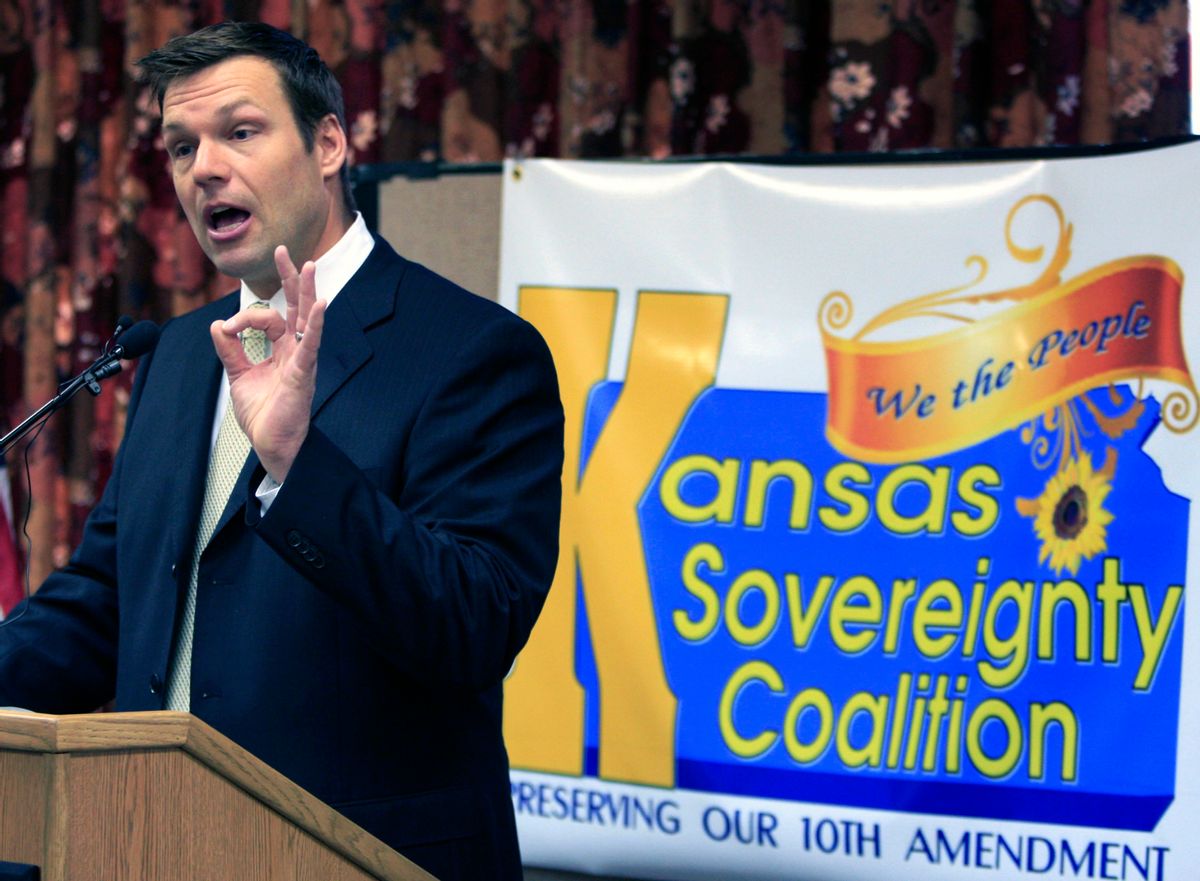 Law professor and Secretary of State candidate Kris Kobach, speaks at a rally in support of the 10th amendment Friday, Jan. 15, 2010, in Topeka, Kan. The Kansas Sovereignty Coalition and the Coalition of Citizen Advocacy Groups held the rally in a meeting house near the capitol. (AP Photo/Orlin Wagner) (Orlin Wagner)
--

Here are a few maps to ponder. This one shows graphically the states that currently have pending laws very similar to Arizona's recent SB1070, as reported by the Wonk Room: This one shows states that have the highest estimated illegal immigrant populations in the United States (according to the Department of Homeland Security): If the "problem" of illegal immigration was measurable in numbers, those two maps would, you'd think, match up. Instead, there's a central bloc of states that seem to be acting in the absence of a demonstrable demographic problem. Missouri, for instance, has an estimated Hispanic population of 3.2 percent, and an estimated illegal immigration population of 22,000 in a state of nearly 6,000,000 people. Yes, 0.3 percent of the population -- three out of every 1,000 people -- are illegal immigrants in Missouri. What possible good could come from a new immigration law in that state? Wouldn't the time and cost of enforcement, both tangible (training costs, court costs, etc.) and intangible (the harm done to that legal portion of the population who stand in danger of being detained) vastly outweigh the benefits?

What these maps make clear to me is that nearly all claims that the authors of these bills make about needing to fill a gap left by the federal government is false. If they were designed to help states actually facing an influx of illegal immigration, they'd be most useful in Florida, New York and Illinois. (And California, yes, but they have a history with Proposition 18). Instead, they're being pushed in states like Missouri, Nebraska and Colorado, where the conservative state legislatures (and, in Missouri and Nebraska, the over 85 percent white populations) are more likely to like the bill. They are being passed as statements, not as real fixes.

It's a disturbing Midwestern pattern, and I'd guess it's driven in part by Kris Kobach, one of the authors of the Arizona bill and a former candidate for Congress in Kansas. Kobach's campaign in 2004 foreshadowed this showdown in every way: he tried to scare the citizens of northeastern Kansas into believing that the immigrant threat was coming, when only about 40,000 illegal immigrants were present.

Kobach was, at the same time, counsel in a case that tried to remove in-state tuition grants to any Kansas residents who were undocumented immigrants. After losing to Dennis Moore in the congressional race and to a judge in the court case, Kobach worked even harder to defend anti-illegal-immigrant practices like refusing to grant housing to undocumented immigrants, and he's been outed as the author of the recent controversial e-mail about the Arizona bill suggesting it be implemented in some nasty, creative ways:

Wonk Room recently obtained an email written by Kris Kobach, a lawyer at the Immigration Reform Law Institute -- the group which credits itself with writing the bill -- to Arizona state Sen. Russell Pierce (R), urging him to include language that will allow police to use city ordinance violations such as “cars on blocks in the yard” as an excuse to “initiate queries” in light of the “lawful contact” deletion:

Make no mistake: Kris Kobach's main interest isn't necessarily victory over illegal immigration. It's the spread of a wider conservative philosophy. He's only recently ended his term as the state party chairman of the Republican Party in Kansas. He knows what a "winning" political idea anti-illegals laws are for Republican lawmakers, and he's been doing his part to spread that GOP wealth around the center of the country.

Apparently, running against the made-up threat of illegal immigrants was such a good strategy before that Kobach's doing it again -- he's currently running for Secretary of State in Kansas.

I won't be at all surprised to see my home state fill in the center of that map very shortly.