Is Obama missing a golden opportunity on energy? 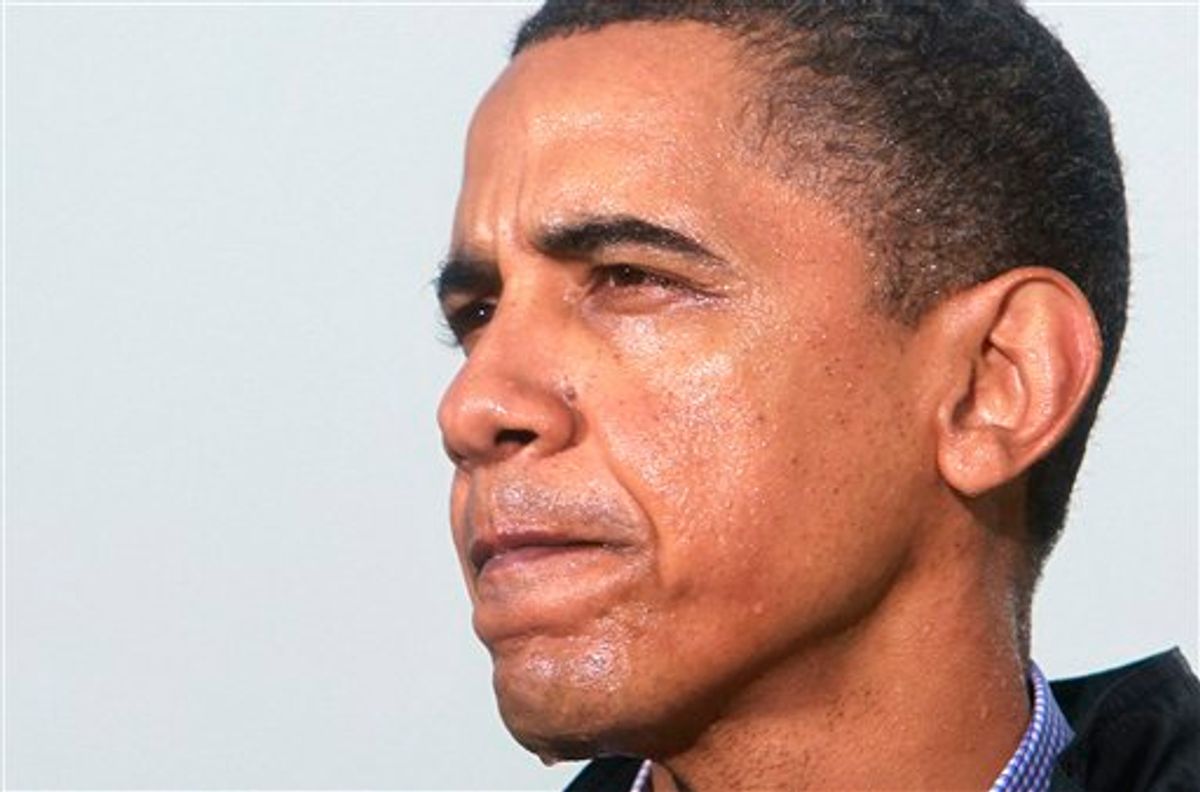 Standing in the rain, President Barack Obama makes a statement to reporters at the Coast Guard Venice Station in Venice, La., as he visits the Gulf Coast region affected by the BP (British Petroleum) oil well spill, Sunday, May 2, 2010. (AP Photo/Charles Dharapak) (AP)
--

The silent threat of the unknown hovers over Mr Obama at all times. By force of oratory, Mr Obama could revitalise the energy debate and alert Americans to the dangers of business as usual. Or he could wait for a brighter day. Fortune, in this case, may favour the brave.

That’s Edward Luce in his optimistically headlined Financial Times piece, “From disaster can come a new direction for US energy” (reg. req’d).

Luce is the latest in a long, long line of people, urging, pleading, and begging Obama to speak out on the gravest threat -- and greatest opportunity -- the nation faces (see Tim Wirth: “The president should deliver a major speech on climate change to the American public, using all the props and charts he can muster to bring the message home. The public interest requires it”).

If you can’t explain to the public now that there are hidden costs of our addiction to fossil fuels, that fossil fuels are injurious to our health, the environment and national security, when can you? Heck, even Andrew Sullivan of the Atlantic opines:

If the Democrats do not use this disaster to advance the energy bill ASAP, they may miss a critical moment to escape the oil-addiction even George W. Bush acknowledged in his final years.

What has become clear, to Graham and anyone else paying attention, is that Obama is not going to do an all-out push. If nothing else, his response to the Gulf oil disaster has made that clear. If he was looking for an opportunity to drive home the clean energy message, this was it — the Katrina of fossil fuels. Yet all he’s done is blandly reaffirm his support for offshore drilling. I haven’t heard a word about clean energy alternatives or, God forbid, efficiency, which if pursued seriously could save more oil than offshore rigs could produce, at a net savings rather than a cost, and with the added bonus feature of not occasionally leaking out and destroying entire American ecosystems and industries.

And here’s Maggie Fox, head of the Alliance for Climate Protection:

“This tragic event is a deafening wakeup call that America’s dependence on fossil fuels cannot continue. We know this dependence is a direct threat to our national security. This massive spill is a stark reminder of the environmental and economic dangers we face as well.”

If that oil had traveled down a pipeline to a refinery and then into the fuel tank of a car, it would have wrecked the planet just as powerfully. We now realize, as we didn’t on the first Earth Day, that the slick of carbon dioxide spreading invisibly across the atmosphere is driving change on a massive scale: by raising the planet’s temperature, it’s melting everything frozen, raising the level of the ocean, powering ever stronger storms. In the Gulf, and in every other ocean on the planet, that extra carbon is turning seawater acid. You can’t see it, but it’s wrecking marine life far more effectively and insidiously even than the spreading oil.

And there’s no way to prevent global warming with better valves. The only way is by ending our addiction to fossil fuel with great speed.

Yes, everyone has the rhetoric right but the Speechmaker-in-Chief, who seems almost like a deer in the headlights, defending his pointlessly preemptive reach across the aisle on offshore drilling a few weeks ago.

Obama could explain how “Limited government can, and often does, lead to unlimited pollution and unlimited disasters.” And, of course he could make the link to Goldman Sachs. There are many, many ways to frame this — but one has to be interested in changing the debate in the first place, of course.

Ironically, the conventional wisdom in Washington DC is that the undersea volcano of oil unleashed by the BP disaster actually harms the dwindling chances for the climate bill because it makes the deal with Lindsey Graham and conservative Democrats on offshore drilling untenable. Seriously, only in the Alice-in-Wonderland world of U.S. national politics would a fossil fuel disaster make it less likely that we would get a bill designed to wean us from fossil fuels!

As the FT notes:

Mr Obama will have to look for new ways to persuade Senate Republicans and centrist Democrats to support legislation to cap carbon emissions and invest in new energy. One approach would be for Mr Obama to throw his instinctive caution to the winds and use the disaster as an opportunity to instruct Americans in the realities of the country’s energy outlook.

Bottom line: Leaders lead. They seize opportunities to galvanize the nation toward a better future. Or they don’t (see Doris Kearns Goodwin: “What would have happened right after September 11th if President Bush had called for a Manhattan Project for independence from Middle Eastern oil?”).

Sadly, for the nation and the world, Obama appears content to let even the modest action in the Kerry-Lieberman-Graham bill quietly die the death of a thousands cuts.

This is the way the climate dies, not with a bang, but a whimper.